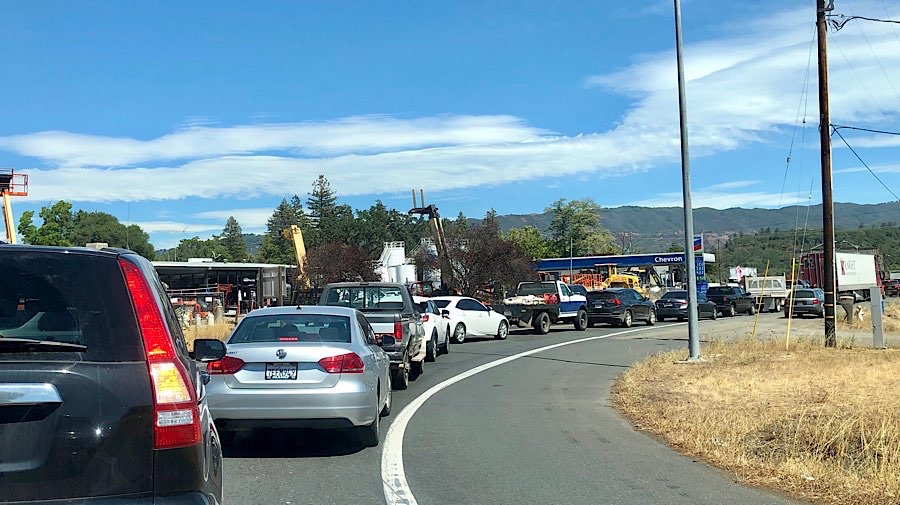 UPDATE 8/20/20 — This morning the evacuation of the area north of Ukiah, around the gas leak was lifted:

Here’s a map for the evacuation order and the tweet from MCSO:

UPDATE 4:25 p.m. — In a brief phone interview Sheriff Matt Kendall explained that PG&E, which operates the gas lines, would make a repair to the leak at around 9 p.m. CalTrans has those off-ramps closed, but traffic is moving smoothly through the area now that most everyone has evacuated.

UPDATE 2:38 p.m. — Evacuations continue, complicated by a car crash on the 101 in the evacuation zone. Traffic is backed up on the northbound 101 around the N. State St. interchange, and on surface streets in the area. The evacuations may last some time as crews travel to deal with the gas situation.

UPDATE 2:16 p.m. — A gas leak and resulting fire have forced the evacuation of a large area north of Ukiah. Local authorities are now asking that CalTrans close both the North State Street and Lake Mendocino off-ramps of the 101, potentially for several hours. Traffic is severely backed up on surface streets in that area.

It also appears that a request has been made to bring in a special crew to deal with this gas leak situation, potentially from PG&E. Such gas leaks are extremely dangerous and can result in large explosions, but also, standing too close and breathing in too much of the gas is hazardous, making working with the leak hazardous in itself. Scanner chatter indicates that it may take a few hours for the crew to arrive. Of course emergency and especially fire resources are stretched thin across the state as we continue to undergo a historic breakout of lightning related fires.

UPDATE 2:10 p.m. — Traffic is backing up significantly on U.S. 101, as traffic is blocked and people attempt to evacuate the area. The evacuation now includes

Here is the text of the sheriff’s evacuation order:

ORIGINAL
MENDOCINO Co., 8/19/20 — A ruptured gas main has resulted in a fire and an area north of Ukiah is now under a mandatory evacuation order as a result. The gas main rupture is at or very near 2147 North State Street, an industrial area with many auto shops. North State Street between Orr Springs Road and Lake Mendocino Drive will be temporarily closed due to hazardous conditions. The incident is being called the “State IC,” and fire crews are on the scene. Personnel are planning on de-energizing power lines.

The electrical utility department of Ukiah, which operates that section of the power grid, has de-energized the 2100 block of N. State Street. No city customers will be affected, but the shut off will require the hydroelectric plant at the Coyote Valley Dam at Lake Mendocino to be shut down, since it feeds power to the grid via a line in the affected area. It’s 1.5 megawatts of power will not be available — a small amount relative to the roughly 50,000 megawatt demand of California, but still no helpful during this moment of a flex alert and strained grid.

This article will be updated when more information becomes available; avoid the area if possible.