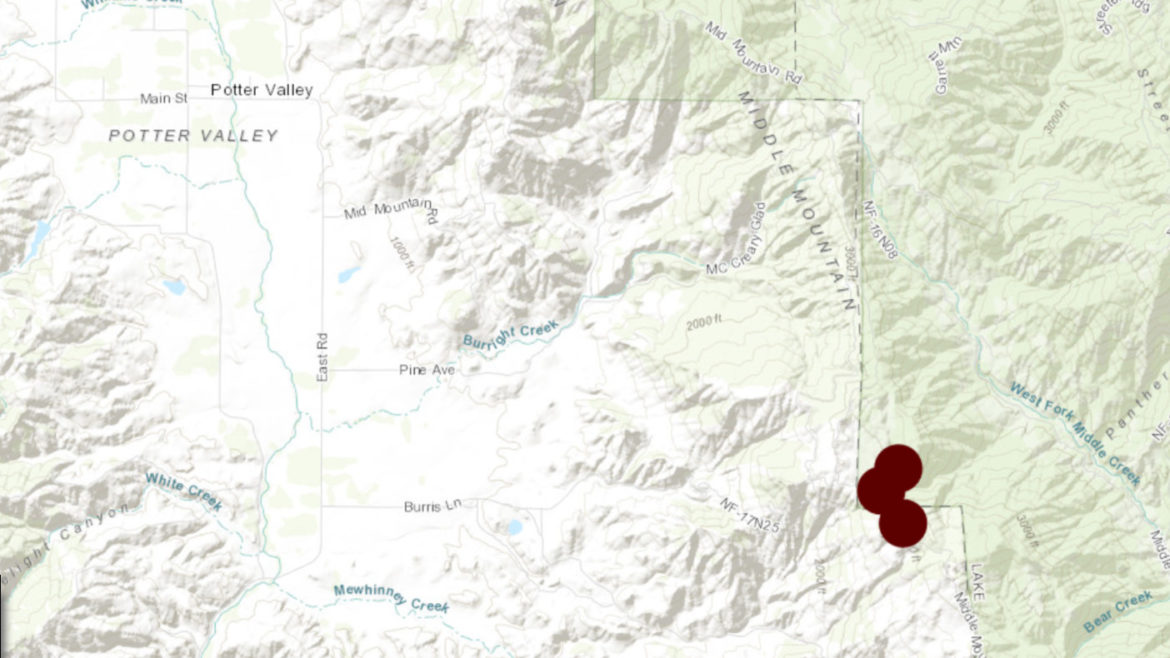 Satellite heat imagery of the 3-19 Fire near Potter Valley as of the morning of August 19, 2020. This data is already several hours old and should not be used for evacuation or public safety reasons.

UPDATE 8/20/20 9:30 p.m. — The 3-19 Fire that began east of Potter Valley on Burris Lane is now 90% contained, according to Cal Fire’s evening update. Five personnel will remain at the fire to patrol for hot spots and monitor for any additional activity or hazards.

Other smoke plumes from more distant fires in the Mendocino National Forest or in other counties may have been visible from Potter Valley this afternoon, but the 3-19 Fire has not grown in size significantly since the first day it began.

UPDATE 8/19/20, 8:40 a.m. — The fire burning in the hills east of Potter Valley, along Burris Lane and near the boundary of the National Forest, held steady overnight at 62 acres with firefighters managing to increase containment to 40%. That fire is referred to as the 3-19 fire under a naming convention adopted during major lightning events because of the large number of small starts that occur during such storms.

That said it is not a certainty that this particular fire was started by lightning, but because it began during this lightning complex it was named according to that convention. However, it is possible that the fire began as a small start in the early morning of Aug. 18, and then spread during the day, and the cause of the fire is still listed officially as being under investigation.

One structure was destroyed by the fire but there have been no injuries.

UPDATE 8:15 p.m. — The 3-19 Fire is approximately 62 acres in size with 30% containment, according to the latest update from Cal Fire Mendocino Unit Chief George Gonzalez on Twitter.

UPDATE 7:30 p.m. — The fire in Burris Road in Potter Valley, which is being called the 3-19 Fire, has not grown significantly in size over the afternoon and is now at 5% containment, according to Cal Fire’s evening update. There are 53 personnel on the fire, and there are no structures threatened, although one structure was destroyed earlier in the day.

UPDATE 5:15 p.m. — Firefighters continue to work on this fire deep in the hills of Potter Valley, but another wildfire has broken out near Covelo, which is forcing evacuation warnings:

To clarify, it is not certain at this time that the 3-19 fire east of Potter Valley was started by lightning, though it is possible that it began as a smoldering start or ember overnight and spread this afternoon with the higher winds and heat. That fire, however, is being labeled according to the lightning plan as 3-19, rather than being given and individual name.

ORIGINAL
MENDOCINO Co., 8/18/20 — The unusual thunderstorms that have passed through Northern California in the last few days have left behind literally dozens of small lightning strike fires across the region.

Here in Mendocino County the largest is a 25 acre fire burning east of Potter Valley along Burris Lane, near the edge of the National Forest. That fire was at one point threatening a ranch house, but appears to have burned around the house.

Though smoke may be visible from the valley floor, the danger is low. The blaze has a slow rate of spread and is now butting up against the burn scar of the 2018 Ranch Fire, and firefighters are saying that as a result it has little potential for growth.

This fire is being referred to as “3-19,” because when the lightning storms arrived Cal Fire switched to a lightning strike plan, which resulted in a different set of naming conventions. For these lightning strike fires Cal Fire treats them as one “complex” which allows for more coordinated responses, and names the fires sequentially with the first number referring to the “branch” or area of the county, and the second number referring sequentially to the incident.

Aircraft are on the scene of 3-19 and making drops, and though it is somewhat speculative, scanner chatter indicates that these property owners did a good job of maintaining defensible space and that the fire has burned around their house.

According to Cal Fire spokesperson Tricia Austin, as of this morning Cal Fire has received 31 reports of a fire with nine of those confirmed to be lightning strike fires within the “state response area,” (SRA) where Cal Fire has jurisdiction. Two were located in the Mendocino National Forest and are thus under federal authority. One was a campfire that got out of control, and 17 were false alarms. Though we are not out of the woods it does appear that the lightning strikes have largely subsided.

Cal Fire is making steady progress on these fires and the majority of them have been tiny spots that were quickly dealt with. The largest is this 3-19 incident, which has more firefighters arriving and bulldozers arriving.