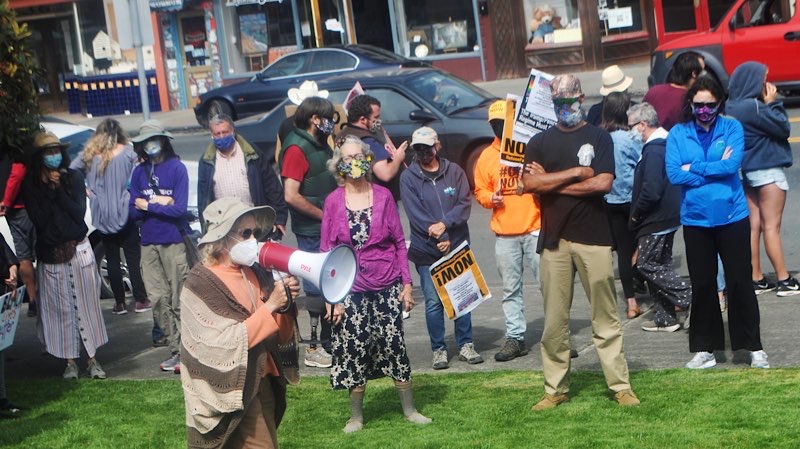 FORT BRAGG, 8/11/20 — A citizens commission established to deal with the suggestion that Fort Bragg should change its name (in order to eliminate the name of the confederate general and slaver, Braxton Bragg) plans to hold mostly private, not public, meetings to start.

In a second unusual move for a city council sponsored effort, the chosen panel includes people from both inside and outside city limits—- who will ultimately advise the city council.

After a contentious and nationally publicized five-hour meeting June 29, held to deal solely with the name change issue that divided the town, Councilmembers Jessica Morsell-Haye and Vice Mayor Bernie Norvell were appointed as an Ad Hoc Council Committee. The committee was tasked with gathering community input on issues like race and inclusive history surrounding the question of whether the town’s name should be changed.

That subcommittee at Monday’s NIght’s Fort Bragg City Council meeting  presented the names of a 16-member “Citizens Commission” which plans to hold regular meetings for at least one year. The council exercised no authority over the group and contemplated no action or vote. (The 16 names are at the end of the story).

The council did vote on other matters, such as  to ask city residents to voluntarily conserve water by 10 percent as part of  stage 1 water conservation request. Mayor Will Lee declared Monday Fort Bragg Police Department Appreciation Day and the council discussed a Thursday special meeting that will likely cancel the November council election.

Although no formal start date for the work of the Citizens Commission was identified at the Council meeting, the committee hopes to meet twice monthly to start and then once a month, Morsell-Haye said.

The original desire to have a community member as chair evolved into the whole group wanting a council member to be chair, to provide a neutral voice to likely strident discussions. Morsell-Haye is that proposed chair. The Citizens Commission includes at least six Indigenous people, although it wasn’t stated who they were. The list includes people known for both liberal and conservative views. Morsell-Haye said working through “hard conversations” will be a big component of the effort.

“Our recommendation is it not be Brown Acted so that deep dive conversations can happen. A certain level of privacy is needed in the first phase,” she said. The Ralph M Brown Act is California’s law that allows the public be granted access to meetings set up by public agencies. The Brown Act gives the council the right to demand openness in any area of public business where councilmembers are involved.

Although the city name change ad hoc committee’s work appears to be done and the council has no authority over the new citizens commission, there was no opposition from the council to either the idea of closed meetings or having people from outside the city limits serve on a panel that will make eventually recommendations to the city council. Councilmembers approved of the hard work done and the direction presented.

Norvell and Morsell-Haye met with 24 people between June 30 and Aug. 4 (by phone, email, Zoom and in person). The committee will want public funds to pay for a professional facilitator. The facilitator would help the group establish ground rules at the first meeting and a statement of problems at the fourth. Morsell Haye presented a commission meeting schedule, although the committee itself will decide exactly where it goes. She said the meetings are now planned as closed, not public.

The recommendations from the committee does include an open public process to follow the work of the Citizens Commission. Morsell-Haye said it’s her hope that the public be looped back in through public meetings by the time a formal recommendation on name change and other issues is made to the Fort Bragg City Council.

Something that eclipsed the whole name change issue and pretty much everything else was the need for more and richer education of the local populace of all ages.

“The key feedback we heard, the thing that kept coming up was the educational component,” Morsell-Haye said.

“Across the board we heard people voice the need for more local history in our schools and a more comprehensive kind of history,” she said.

Mayor Will Lee asked about whether members were required to be from the Coast or the City of Fort Bragg.

“We weren’t checking addresses but we were mindful in our conservations that they were truly invested in our community,” said Morsell-Haye.

“We also knew who we were talking to,” said Norvell.

In the only public comment on the issue of whether Commission members should be city residents or not, Paul McCarthy, publisher of Mendocino Sports Plus, provided a jocular objection.

“If they aren’t city voters they wouldn’t be able to vote on any possible name change… I ask that you table the agenda item so there is time for the city council to look over a list I can send of people from Albion and Mendocino who would like to serve…. (And) I have some unemployed friends back in New Hampshire that like to share their unsolicited opinion on any topic.”

Councilman Lindy Peters hoped that the work could lead to a big community-wide celebration of Native American history similar to Paul Bunyan Days, perhaps to be held on what is now called Columbus Day.

Morsell-Haye mentioned the Native American members and said the Commission would work through any such ideas.

“If that is something they view as meaningful action, that would have a place in the discussion,” said Morsell-Haye.

“I’m happy with the start of this and the progress you have made so far in the midst of a pandemic,” Mayor Will Lee told Norvell and Morsell-Haye.

By a unanimous vote, the council enacted a stage 1 water conservation request for the city, which asks city residents to voluntarily lower their water use by 10 percent over the same time last year. Although some river flow measurements are lower than 2015, when the city last endured a severe drought, the city now has three times as much water storage, due primarily to the construction of the Summers Lane Reservoir. The city hopes by getting started early on water conservation, mandatory reductions can be avoided entirely. Stage 1 is a voluntary phase which asks residents to do the following (and more):

a. Don’t allow irrigation water to run off the yard into the streets. b. Use hoses with fittings on the end that allow shutoff, not requiring one to return to the outlet. c. Don’t wash driveways, sidewalks, and similar hardscapes. d. No fountains except where the water is part of a recirculating system. e. No watering within 48 hours after measurable rainfall. f. No watering other than before 10:00 a.m. and after 6:00 p.m.

A special city council meeting will be held Thursday at 6 p.m. to determine if the November City Council election will be canceled. Mayor Will Lee and Vice Mayor Bernie Norvell are up for reelection, but nobody else filed for the two seats by the deadline last Friday. The city said in a press release cancelling the election could save the city $10,000. The special meeting is needed to cancel the election.

In closed session, the council was set to confer with legal counsel and consider initiating two potential legal cases. City Manager Tabatha Miller said there was no reportable action taken out of closed sessions.

“The Fort Bragg Police Department bravely encounters potentially infected Covid-19 patients daily; assists with mentally ill and homeless individuals; interacts with drug abusers and others under the influence of illegal substances; and de-escalates many violent situations regularly, the proclamation read.

“The Fort Bragg Police Department had nearly 20,000 documented calls for service in 2019 and many hundreds of those calls resulted in positive contacts with members of the community,” the Mayor read.

“The Fort Bragg Police Department recently banned the use of choke holds and the Fort Bragg City Council recently adopted a Resolution requiring a hiring policy for police officers to disqualify any applicant based on prior acts of misconduct, which includes but is not limited to: use of excessive force, racial bias, sexual assault, discrimination against race, gender, religion, nationality, sexual orientation, or dishonesty relating to the reporting, investigation, or prosecution of a crime,” the mayor read.

A presentation was held last Tuesday which included the California Highway Patrol, Mendocino County Sheriff’s Department and the Fort Bragg Police Department. “Members of our community have been showing their appreciation since, mostly by food,” Lee said, listing Harvest Market and a list of restaurants that have treated local peace officers over the last week.  Judy Valadao of Fort Bragg, who is involved in many civic matters, commenting by email, thanked the city for making the recent community “blue light” celebration a success.

“The support for our local law enforcement was awesome. You are appreciated not just today everyday,” she wrote.

Here is the meetings schedule proposed: