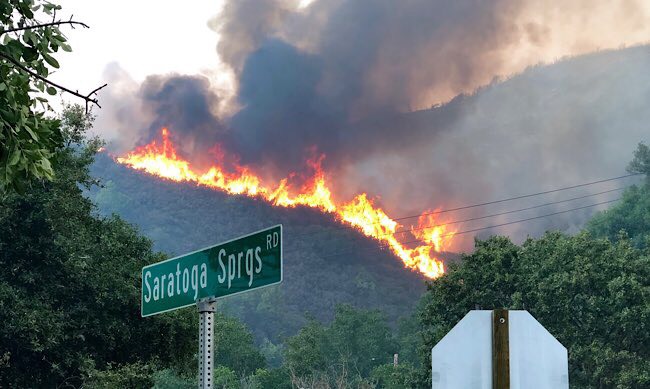 MENDOCINO Co., 6/6/19 — The Ranch Fire, part of the Mendocino Complex, which burned 410,203 acres, and destroyed 280 structures, becoming the largest wildfire in modern California history, was started by a rancher driving a metal stake with a hammer, Cal Fire announced today. Three fire fighters were injured fighting the blaze and Fire Chief Matthew Burchett of Utah was killed when a very large air tanker dropped water too low, knocking over a tall Douglas fir which fell on the Utahan.

It has long been rumored around here that the devastating fire was caused by the simple everyday action of driving a stake during the mid-day heat. And after about ten months Cal Fire investigators have published the results of the investigation, confirming that indeed the fire was started by a hot metal spark that landed on a bed of dry brush, then set off burning into a huge conflagration. You can read the full report here (or scroll down).

The day the fire started was an extremely hot and dry one, with high winds blowing. Additionally, the River Fire, also part of the Mendocino Complex, began burning about an hour later, and a large number of resources had to be devoted to that fire.* In the days that followed, Cal Fire struggled to distribute resources across the state as the deadly Carr Fire burned near Redding, and a slew of smaller fires burned across the state.

The fire began on the property of a rancher in the 5400 block of Hwy. 20, just east of the entrance to Potter Valley. The man was placing some shade cloth over some water tanks, when he stumbled on a yellow jacket nest in the ground. Being allergic, he decided to drive a stake into the nest to try to bottle the insects in. He drove a 24 inch steel concrete stake (apparently the kind used for form work) about  a foot down, using a steel Estwing hammer, with a crosshatched striking surface. That action produced a spark which ignited dry grass nearby and quickly spread. No charges have been filed against the rancher, or anyone else.

Investigators on the scene measured the temperature there at 100 degrees, and humidity was low with high winds. On the same day investigators conducted a careful examination of the hillside where the fire began, tracing back its origin to within a couple feet of the concrete stake. Using a magnet they recovered shards of steel from the area, that matched the stake, and observed that the stake was cracked and flared at the head, with crosshatching impressions similar to the patter on the hammer.

Here is an extended quote from the Cal Fire report, with the name of the rancher redacted, describing the start of the fire:

[the Rancher] said he was putting up a shade cloth for the above ground water tanks located up the hill from his residence. He said the shade cloth blew down sometime last year and he wanted to put it back up as a barrier from the sun. He said he was in the process of putting it up when he agitated an underground yellow jacket’s nest. [Rancher] said he is allergic to bees and waited for the yellow jackets to stop swarming. Once they did, [he] quickly hammered a 24-inch concrete stake into the ground to plug the hole. He said he used a claw hammer and drove the concrete stake 10 to 12 inches into the ground. [The Rancher] said he smelled smoke and saw a vegetation fire next to where he was working. [He] said the fire was 2 feet by 2 feet in size when he first saw it. He said the fire started in grass he estimated to be 2 to 3 feet in height. He said the vegetation fire moved quickly to the shade cloth located on the ground a few feet away. [The Rancher] grabbed a shovel and tried to extinguish the fire, but said the ground was so hard it was difficult to get enough dirt to be effective. [He] said he tried to use a black polyurethane waterline next to the water tanks to extinguish the fire, but the line kinked from the heat of the fire and restricted the waterflow. [He] then tried to use a 1½ inch PVC water line connected to the water tanks, but was unable to get enough water pressure to reach the fire. [The Rancher] said he unhooked the trailer from his four-wheeler and tried to get in front of the fire traveling uphill from the water tanks. He said in the process, he lost control of his four-wheeler and had to jump off. The four-wheeler rolled downhill lodging itself between the water tanks and a cut bank. [He] said he ran downhill to his residence and called 911 to report the fire. He then turned on the water pump near his residence to supply the water tanks to help support the incoming fire suppression resources. At the time of the interview, [Rancher] was suffering from what appeared to be smoke inhalation and heat exhaustion. [He] refused an ambulance and medical treatment.

Here is the press release with some additional details: 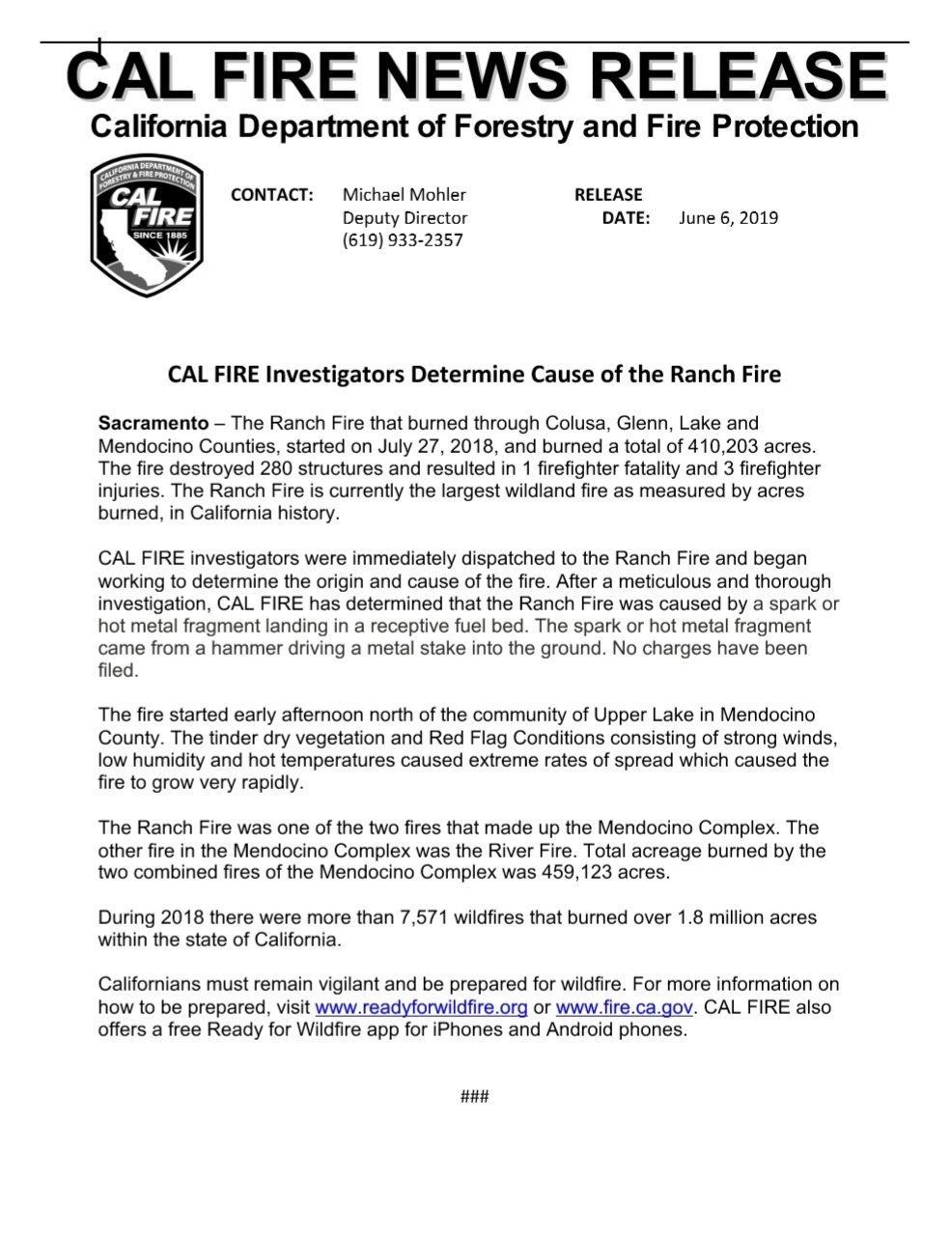 And here is the full report:


*Correction: And earlier version of this article mistakenly stated that the River Fire had started earlier than the Ranch Fire. In fact, the Ranch Fire began first.

2 thoughts on “Ranch Fire was caused by spark from a hammer, Cal Fire announces”