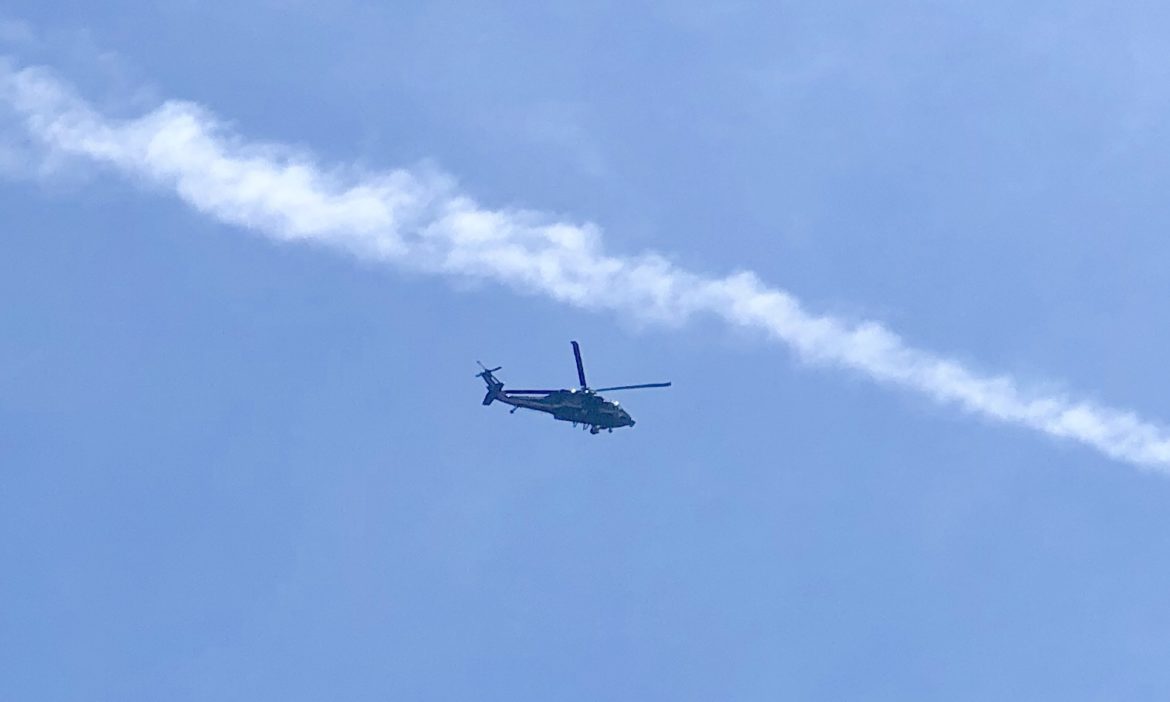 UPDATE 6/14/19 — The MCSO has responded with more information about the helicopter training. Read about it here:

ORIGINAL
MENDOCINO Co., 6/13/19 — There are a lot of helicopters flying around Mendocino County this week, and people are noticing.

At least four of the copters were involved in a joint training exercise conducted by the Mendocino County Sheriff’s Office (MCSO) and at least one agency of the federal government, United States Customs and Border Protection. In addition, at least one very similar looking helicopter has been flying for Pacific Gas & Electric, inspecting transmission lines. This is in addition to the normal helicopter traffic from the air ambulance service REACH. We are not currently aware of any helicopters flying for the National Guard, but one of the helicopters flying with the training operation was a black Blackhawk, that could have been mistaken for a military copter.

U.S. Customs and Border Protection (USCBP), is one of the law enforcement branches of the Department of Homeland Security, but is distinct from Immigration and Customs Enforcement (ICE). The MCSO has conducted similar aerial trainings, utilizing helicopters to identify cannabis gardens with state and federal agencies at the Ukiah airport in previous years.

According to Rusty Noe, a former Lt. in the MCSO, and current contractor, the USCBP has had two helicopters in the county that have been flying over the county, a Blackhawk and an AStar, both up from their San Diego office (see below for links and descriptions so you can better identify helicopters). Additionally the operation has contracted two private helicopters, both smaller Bell copters, possibly JetRangers or LongRangers. Indeed, we received a tip from a reader that they had spotted a helicopter with a tail number corresponding to a helicopter with Homeland Security, and Homeland Security has confirmed that they have aircraft operating in “routine training mission in Northern California.” (See full statement)

Noe explained that the helicopters had been flying as part of a training operation since Monday, and that their operations were planned to ceased around 1 p.m. today. He said, “It’s worked out very well, all the people we have in the class have gotten what they needed to get and the training’s going great.”

The training is meant to give law enforcement officers from other agencies training in “…the identification of marijuana gardens and environmental crimes from an aerial platform.” And Noe explained that given the abundance of cannabis grows in Mendocino County, it makes an ideal location for this kind of training.

Noe elaborated, “It’s pretty simple situation, we’re just flying around to give these guys an idea of what they can take back to their agencies and what to look for…it’s a pretty target rich environment when it comes to that thing.” He added that with though the world has changed with the advent of legal recreational cannabis, …it’s not going away and we still have the trespass gardens in forest lands and people who don’t want to play the game. And added to that there’s the egregious environmental stuff — so we’ve tailored [our strategy] to that…grading trash, that type of thing, how close to the creeks it is.”

Beyond Customs and Border Protection, it is unclear exactly which agencies were cooperating in the training with the MCSO over the past few days. What’s more, the exact nature of information sharing between these departments has not been ascertained. Several permitted cannabis growers, or growers who remain in the limbo of the permitting process, as well as non-cannabis farmers, reported seeing these copters hovering over their property, sometimes at a low enough height that they were able to see and wave to the men in the helicopters.

The Mendocino Voice requested additional details concerning the training operation from the MCSO. Captain Gregory Van Patten said in an email, “The training being conducted is for the purpose of teaching law enforcement professionals how to identify the existence of marijuana/cannabis being grown in the county especially in connection with acts of environment degradation and illegal water diversion.” As of time of publication the MCSO had not gotten back to us with additional information as to the details of the training and multi-agency coordination. Mendocino County Sheriff Tom Allman has indicated that cannabis enforcement activities would be ongoing, and that environmental degradation remains a priority for local law enforcement. An April New York Times article on California cannabis regulations featured Allman with the line: “Legalization, Sheriff Allman said, ‘certainly didn’t put cops out of work.’”

In addition to this operation, PG&E has been active up and down the North Coast, flying over transmission lines with at least one Bell LongRanger, rented out of Redding, confirmed Deanna Contreras from PG&E. Contreras said that the helicopter had been flying electric lines in Willits on Thursday as part of a drill for future power shutdowns. However, she had not provided additional information as to whether any other planes were working with PG&E in the area by the time of publication.

Jaime Ruiz, a public information officer with USCBP, said that Custom and Border Protection helicopters often assist local law enforcement on local operations, who do not have the same level of equipment as that federal agency.

One of the helicopters also aided in the search for Vincent Soto, according to MCSO Lt. Shannon Barney. Barney explained that the helicopter it was there for about 30 minutes flying in the hills around Lake Mendocino assisting with a search for Vincent Soto, who remains missing after a boat accident on Tuesday. A photo of one USCBP helicopter appears to be included in this Facebook post from MCSO regarding the search and rescue operations.

Readers have reported seeing both a blue and white helicopter, with USCBP “markings,” and a black helicopter (some say with a yellow or gold stripe) that appeared to have cameras mounted in front and resembled a Blackhawk in a number of locations around the county since Tuesday.

Many have reported the helicopters flying extremely low, such that the pilot and occupants are visible, with some reporting seeing occupants taking photographs. The planes have been seen hovering as if to land or circling in a number of areas, including both permitted cannabis farms, and farms containing no cannabis whatsoever. Hundreds of Mendocino County cannabis farmers remain in some legal limbo as they wait for their applications to either be approved by the county, which has hundreds of farmers “in process,” or await final permit approval from the California Department of Food & Ag (CDFA), which has come under fire for delays in the statewide permit process.

Reader reports include sightings of both helicopters in the Covelo area, particularly east around Black Butte and the Eel River, Iron Peak, the south side of Spy Rock, Comptche, the Anderson Valley, Hopland and the greater Ukiah area, Tomki Road east of Willits and a number of locations Redwood Valley and between Redwood and Potter Valleys, and in the Willits area, including both southwest and southeast of Willits near Blackhawk Drive and Walker Lake Road. A number of readers have also reported seeing these helicopters circle or return to the same location they were seen earlier in the day; one report indicates both planes were seen simultaneously.

There have also been rumors of National Guard activity, though no actual confirmed sightings, and it seems possible that people seeing the black Blackhawk helicopter have mistaken it for a National Guard aircraft. However, Governor Gavin Newsom has been vocal in recent weeks about an effort to use the National Guard to eradicate trespass and illegal grows especially on public lands. Lieutenant Colonel Thomas Keegan, a public affairs officer with the California National Guard, said in an interview, “It’s different from 20 years ago with CAMP, but as the laws have changed, we’re right there with your sheriffs, to go out there after illegal grows on public lands.” Adding, “We’re supporting the sheriffs. We’re not going out there and doing anything without the sheriffs.”

Here is a statement we received from United States Customs and Border Protection:

U.S. Customs and Border Protection is currently conducting a routine training mission in Northern California, in partnership with local, state, and federal law enforcement agencies.  CBP Air and Marine Operations brings unique capabilities, training, and expertise to a multitude of different law enforcement missions. These include border security missions as well as missions to investigate criminal networks; provide domain awareness in the air and maritime environments; respond to contingencies and national taskings; and more.  CBP routinely partners with other law enforcement organizations to develop their skillsets (and ours) by participating in cross-training or CBP-led training opportunities, as well as strengthening our abilities to conduct joint missions as needed with those agencies.