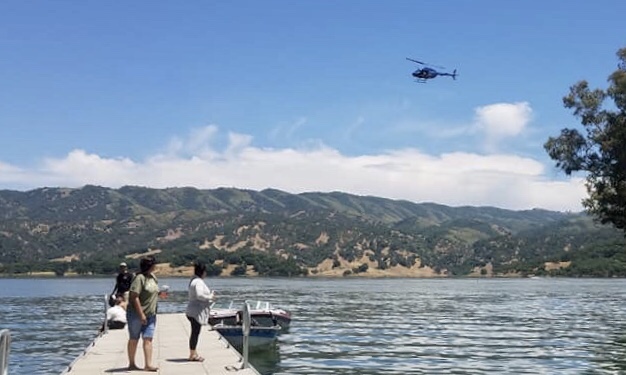 UPDATE 5:50 p.m. — The Mendocino County Sheriff’s Office, Mendocino Search and Rescue and family members of the missing man have been searching Vincent Soto, 40 of Laytonville, all day, but as of about 5 p.m. today he remained missing.

Earlier today it was announced that the body of Carlos Soto, 62 of Laytonville, Vincent’s father, had been found yesterday floating in Lake Mendocino. The two had been out on a fishing trip. Both Carlos and Vincent Soto’s identification were found in their small boat, as was Vincent’s phone.

In a brief interview Lt. Shannon Barney of the MCSO explained that, after a day of diligent searching, the most likely scenario is that Vincent Soto’s body is in the water and that he is dead, but Barney emphasized that they have not given up hope and will continue searching. He said it is possible that Soto managed to swim to shore and may be injured or incapacitated onshore.

Barney said that the operation has been based at the south boat ramp and that while the Lake is not closed, if people use the north dock it would be more convenient.

Search and rescue can’t take volunteers without proper training, and they have sufficient supplies and provisions, though the deceased and missing’s family are present as well.

Involved in the search today were 16 search and rescue personnel, six sheriff office personnel, and three people from the Army Corp of Engineers, plus helicopter crews.

Barney added, “We appreciate people using caution on the lake…just be cognizant that there are search efforts on the lake at this point.”

He also noted that in cases where a person drowns in a large body of water and their body sinks, it often takes between five and 10 days before their body resurfaces, depending on the depth of the water.

Here’s the update from the MCSO:

The Mendocino County Sheriff’s Office, Mendocino County Search and Rescue, personnel of the Army Corps of Engineers, family and friends of the missing person, and a helicopter were all deployed and utilized in search efforts this morning and afternoon in an attempt to locate missing person, Vincent Soto.  The Helicopter and crew were attending a training for flight crews at the Ukiah airport and graciously diverted to assist in this search.  These effort were not successful.

The search efforts will start again on the morning of June 13th.  Anyone with information about this case is encouraged to contact the Mendocino County Sheriff’s Communications Center at 707-463-4086.

MENDOCINO Co., 6/12/19 — The body of Carlos Soto, 62 of Laytonville, was found floating in Lake Mendocino late yesterday afternoon. He had been fishing with his son, Vincent Soto, 40 of Laytonville, and their boat was found nearby and empty — though Vincent’s wallet and phone were found in the boat, along with his father’s. Vincent Soto is still missing, and a search is underway.

The cause of Carlos Soto’s death has not yet been determined but “but there were no obvious signs of foul play being involved,” according to the Mendocino County Sheriff’s Office.

After the body and boat were recovered “Sheriff’s Deputies contacted the Mendocino County Sheriff’s Search and Rescue Team who initiated a search by boat and by ground using divers and a side scan sonar system used to search under water.  Search Teams will also be searching the shoreline of the lake.”

The search is continuing today, and Lt. Shannon Barney of the MCSO explained that, “Right now we’re basically treating it as a missing person with a high likelihood that they’re in the lake but they could be somewhere else.” He noted that it’s possible that Vincent Soto may have made it to shore and that search and rescue is looking for him on the shore and in the vicinity of the lake.

The cause of death of Carlos Soto has not been determined and his remains will be autopsied tomorrow.

Barney added that the public should be aware that there are many search and rescue personnel in the area, and to be respectful and exercise caution.

If you have any information as to the whereabouts of Vincent Soto you can call the Mendocino County Sheriff’s Dispatch Center at 707-463-4086. Search and rescue is not currently accepting more volunteers.

Synopsis: On June 11, 2019 around 6:10 PM the Mendocino County Sheriff’s Office was contacted about a deceased person found floating in the water at the south east end of Lake Mendocino.  It was also reported that a boat, without any persons aboard was also located in the immediate area.  The reporting party indicated he’d observed the boat unattended, with no one aboard, so he went to investigate and observed the body in the water.

Mendocino County Sheriff’s Deputies responded to the area and with the assistance of personnel from the Ukiah Valley Fire Authority, located and recovered the body of a deceased male adult approximately 50 yards away from the boat.  Identification in the boat was used to identify the decedent as Carlos Soto, 62 years of age, out of Laytonville CA.  The cause of death in this case has not been determined but there were no obvious signs of foul play being involved.  An autopsy is scheduled for Thursday June 13, 2019.

During this investigation a second wallet with identification and cellular telephone were also located inside the boat.  The wallet and phone belonged to Vincent Soto, a 40 year old adult male, also out of Laytonville CA.  Deputies were able to contact family members of the decedent where they learned the decedent, Carlos Soto, and his son, Vincent Soto had gone fishing on Lake Mendocino and should still be together.  Deputies also located the missing persons vehicle with a boat trailer at the North Boat Ramp of Lake Mendocino.  With the the two men having planned a day out together on the lake, a missing persons investigation was initiation related to Vincent Soto.  An initial search of the lake showed no signs of where Vincent might be.

Sheriff’s Deputies contacted the Mendocino County Sheriff’s Search and Rescue Team who initiated a search by boat and by ground using divers and a side scan sonar system used to search under water.  Search Teams will also be searching the shoreline of the lake.

Vincent Soto (pictured below) is described as being 5’09” tall, weighing approximately 190 pounds, with “salt and pepper” colored hair that is cut short.  He is clean shaven and when last contacted by relatives, around 1300 hours on June 12, was shirtless and thought to be wearing blue denim cargo type shorts and possibly red (low top) style tennis shoes, possibly made by Nike.  Family members said he has three tattoos; “One Love” on his chest that is multicolored, an English Mastiff on his left shoulder and a Native American with feathers on his right shoulder.

Anyone with information related to this case is asked to contact the Mendocino County Sheriff’s Dispatch Center at 707-463-4086.

Here is a picture of Vincent Soto, presumably from his driver’s license:

One thought on “One man found dead in Lake Mendocino — the search continues for his adult son (updated 5:50 p.m.)”