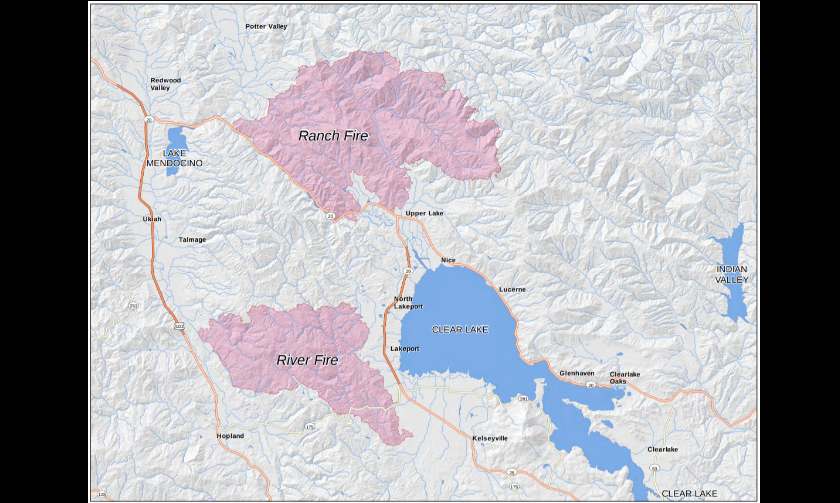 UPDATE 12:10 a.m., 8/2/18 — As of late this evening firefighters had continued to make progress against the fires, and continued to defend property and life across a series of very long fire lines, though the number of structures has been revised up, to 14 residences and 24 other structures. This took place amidst difficult weather conditions, that resulted in three new wildfires breaking out in a one day period.

Ranch Fire only grew by 2,500 acres to 61,514 acres and remains at 15% containment. The River Fire grew only by 1,500 to 33,398 acres and remains at 38% contained. This represents the smallest increase in fire size in several days, both in absolute terms and percentage. Firefighters succeeded earlier in establishing hard fire containment lines around key populated areas, including Lakeport, and have continued to extend dozer lines around more rural developments, as well as into BLM lands on the River Fire and into the Mendocino National Forest on the Ranch Fire. These dozer lines in undeveloped lines are in some cases at some remove from the current edge of the fire, meaning that the fire may continue to burn there, and give off smoke for days.

In the next few days the weather promises to remain adverse across Northern California, with the high temperatures, and a new low pressure system potentially bring higher winds.


Governor Jerry Brown gave a press conference earlier today at which he spoke about the fires, their tremendous cost, and the role of climate change in our ever worsening fire seasons — and many other things, including the prehistory of California, the advent of civilization, and the priest who taught him economics in high school.

The high temperatures, gusty winds and dry air have been extremely conducive to wildfire, with 3 significant fires breaking out in Mendocino County, in only 24 hours — the Eel Fire in Covelo, the Vichy Fire near Ukiah, and the Western Fire south of Hopland. Thankfully both the Vichy and Western fires were put out quickly. The presence of large aircraft and ground resources meant that in both cases a huge response was possible in mere minutes, attacking the fires before they could get a foothold. For more on these fires see below.

Unfortunately, the Eel Fire near Covelo, which started yesterday evening, continues to burn. Because it is burning in the Mendocino National Forest, management of the fire has been transferred to the United State Forest Service (USFS), though CalFire continues to participate and send aircraft to the fire. For more on that follow this link.

Here is a resource list for evacuees, and people displaced by the fires: 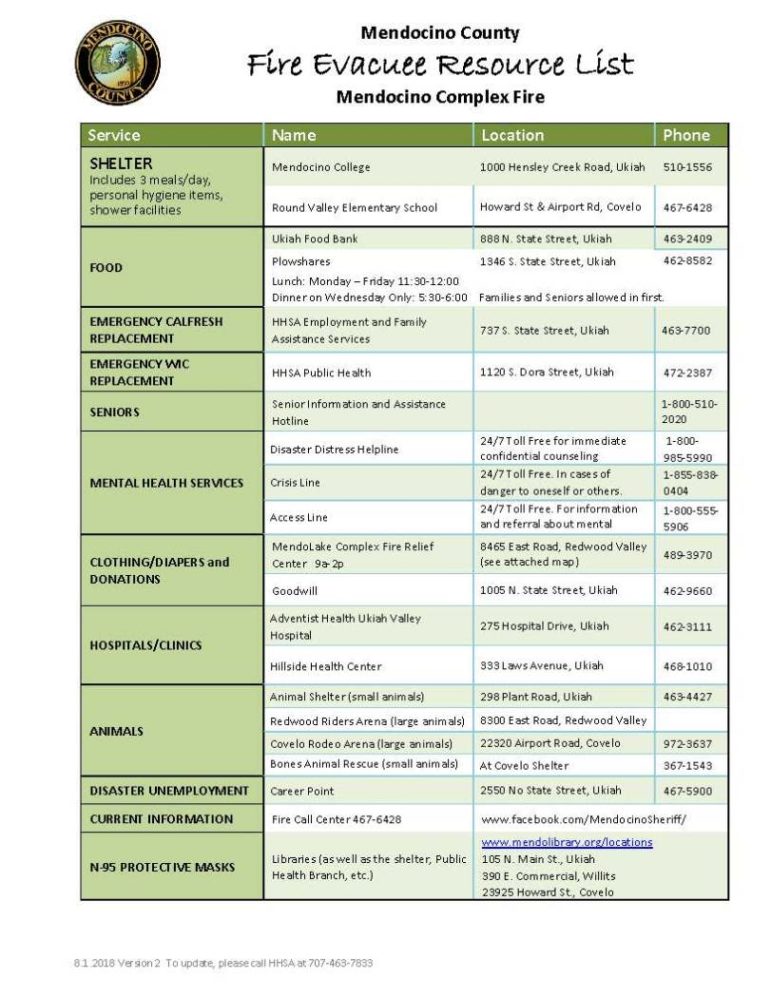 As of this yesterday, a limited number of new items are being accepted at the MendoLake Complex Fire Relief Unit, located at 8465 East Road in Redwood Valley, across from Redwood Valley Market. We will update we will update with more information about what donations will be accepted in the morning.

Evacuees from both Mendocino and Lake counties who received CalFresh benefits or have experienced food loss may be eligible for replacements; the application must be received by August 27. The information for Lake County residents can be found in yesterday’s fire post, but Mendocino County HHSA will also provide “replacement affidavits” for displaced residents of Lake and Shasta counties who get in touch. To apply for replacement benefits, please contact:

Mail delivery has stopped in the evacuated areas of Lake County, and will resume when evacuations are lifted. Until then, all the evacuees from Lake County (both Ranch and River fires) can pick up their mail at the Clearlake Post Office, 4500 Olympic Drive, Clearlake, from 10 a.m. to 5 p.m with photo ID.

UPDATE 3:30 p.m. — Gusty winds are driving the fires and growing the smoke plumes substantially, but the fire is not threatening Ukiah, as was emphasized by the MCSO in a tweet saying, “Although that fire is becoming more visible there are no warnings at this point.”

UPDATE 3:00 p.m. — Yet another wildfire broke out today, this time near Ukiah, here are the details:

UPDATE 1:20 p.m. — With the River Fire continuing to burn east of Hopland, and north into unpopulated BLM land, evacuation orders have been reduced for the Hopland area. Here are those details:

MENDOCINO Co., 8/1/18 — As day 6 of the Mendocino Complex fires begins there is some good news, both fires have substantially increased containment, and firefighters have made good progress in building hard breaks around populated areas.

The Ranch Fire has grown to 59,014 with 15% containment. Firefighters have made good progress at establishing lines at Hwy. 20, though the highway remains closed. They’ve also conducted back burns to dozer liners in the Mid Mountain area, and other more rugged areas. However, the fire continues to burn into the National Forest, where there is less risk of harming people or damaging property.

Huge progress was made in containing the River Fire, which at 31,898 acres was 38% contained. Firefighters made lots of progress in establishing hard lines around Lakeport, and farther south, and the evacuation order was lifted for Kelseyville. Firefighters, and other public officials were optimistic yesterday that the Lakeport may be repopulated soon.

Follow this link for the latest map of the fires: 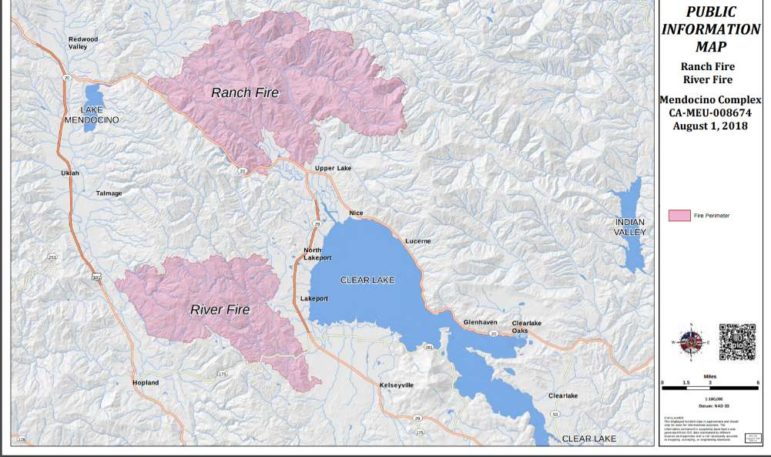 Here is the fact-sheet from CalFire:


On another front, a new fire erupted near Covelo, but the growth of the fire slow substantially over night:

A power outage in areas affected by the fire has been repaired somewhat. People in Potter Valley and Kelseyville have had power restored, though about 1,300 customers in the area remain without power.

A community meeting to discuss the emergency is scheduled in Kelseyville for this evening, at 6 p.m., here are those details:

The Unified Commanders, CAL FIRE, and U.S. Forest Service are hosting a community meeting to discuss the current situation of the Mendocino Complex. Officials are giving an operational overview briefing, highlighting the current actions firefighters are taking on the fires. Current maps of the fire will be available, as well as other handouts.

Additionally, officials will be available to answer questions.

NOTES: Please arrive early, as the meeting will start promptly at 6 p.m. If you have questions about the meeting, please call the Mendocino Complex Fire Information Line (707) 574-8261.