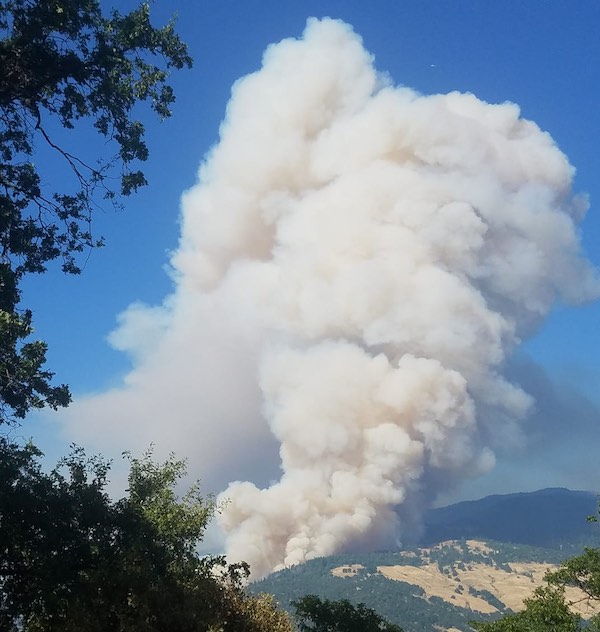 UPDATE 8/2/18 12:30 p.m — Read our newest article here, we will be updating information as it becomes available.

The size of the Eel Fire has not grown overnight, according to the Mendocino County Sheriff’s Office, and more accurately mapping puts the fire at about 972 acres. The United States Forest Service has now added the incident to their fire map, and it putting the containment at 5%, and we have made repeated requests for more information. We will update as more information comes in.

UPDATE 8/1/18 10:45 p.m. — The state of the Eel Fire is currently something of a mystery to the general public, as there are no current updates from the USFS about the acreage or containment of the Eel Fire as of the time of publication. We had previously understood that there would be some updated statistics available this evening. We have included some additional information for evacuees in this article and we will update any info as soon as it comes in.

UPDATE 8/1/18 5:15 p.m. — The Eel Fire has grown to 1000 acres, with 0% containment as of mid-day today. The United States Forest Service (USFS) will now be handling the management of the fire, as large portions of it are within the Mendocino National Forest.

Several structures are currently threatened, but there is currently no specific information on possible structure damage. There are at least six engines, four water tenders, and a variety of air resources including helicopters and air tankers on the scene, including fire crews from the USFS and Brooktrails Fire Department, as well as private contractors. The cause is currently under investigation.

The fire is primarily burning east at this point in time, said Punky Moore of USFS, and is partially burning in the same area that the North Pass fire hit in 2012.

A shelter has been established at Round Valley Elementary School, at the corner of Howard Street and Airport Road in Covelo, which is being staffed by Health and Human Services. There will be cots, blankets, and food available for evacuees. For more information, call the Fire Call Center at 707.467.6428.

The Rodeo Arena, located at 22320 Airport Rd., Covelo, is accepting large animals that need lodging due to the fires. They are not accepting small animals at this time. For more information, please call Lourance Hall at (707) 972-3637.

Free masks are also available at the Round Valley library during open hours.

More information about the current acreage should be available later in the day.

UPDATE 8/1/18 9:00 a.m. — According to CalFire the Eel Fire, which is burning about 9 miles east of Covelo, held steady overnight at about 865 acres, though evacuations and road closures remain in effect.

UPDATE 9:15 p.m. — The MCSO has issued a detailed map of evacuation areas and advisory areas, along with this message: 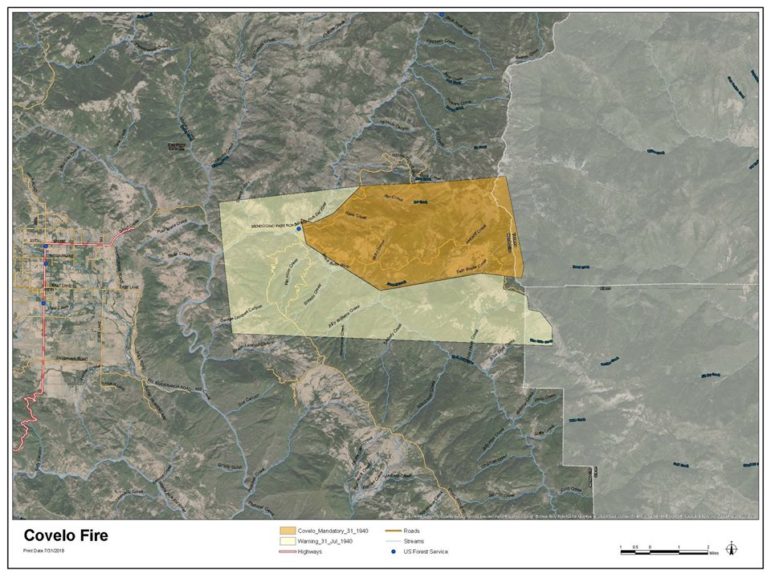 UPDATE 9:00 p.m. — CalFire is now stating that the Eel Fire is at 865 acres. For more information on the evacuation areas and shelters, scroll down

UPDATE 8:50 p.m. — Mendocino County is creating some kind of sheltering set-up for people evacuating from the Eel Fire near Covelo. From the MCSO:

EVACUEES: If you need shelter for tonight please check in at the Covelo Fire Station, 75900 Covelo Rd, Covelo at 9:30pm. You’ll be met with Mendocino County Health and Human Services Agency shelter staff.

UPDATE 8:10 p.m. — The Eel Fire in Covelo has reached 650 acres and a new mandatory evacuation order has gone out that includes the Black Butte Ranch community:

The MCSO’s Lt. Shannon Barney said the mandatory evacuation area covers “north of Black Butte river, east of the Eel River work center, west of M4, and between the Anthony peak lookout and what’s commonly known as Little Baldy, which is about 10 miles out M1. The fire seems to have cut off FH7, and so first-responders cannot get to residents who may be east of the fire, since the fire has cut off the road. People living east of the fire in the evacuation area should evacuate immediately to the east of FH7, towards Glenn County.  People living west of the fire in the mandatory evacuation area should head towards Covelo. M1 is currently closed at the intersection of Mendocino Pass Road.

Barney emphasized that people should attempt to contact or reach any family or friends living to the east of the fire, as law enforcement’s ability to reach people in that area “is sparse,” and the steep terrain and remote forest area can make notifications difficult, and deputies cannot physically access people there. He also emphasized people should remain alert and vigilant, and that law enforcement does not have the resources to perform emergency rescues for people who refuse to leave the mandatory evacuation areas. Barney also asked people to remain careful on the roads.

Ten structures and a campground are currently threatened, according to CalFire Public Information Officer David Clark, and the cause of the fire remains under investigation. He said that the fire does have the potential to possibly damage community infrastructure, such as electrical power, and also may impact the road network in the Round Valley area.

CalFire units, Round Valley fire, and at least six law enforcement units are currently on the scene, and with more law enforcement resources on the way. Due to the ongoing Mendocino Commplex fires, there was “an abundance of resources that were able to be dispatched immediately to the area, Clark said.

UPDATE 7 p.m. — The Eel Fire has grown to 400 acres, with 0% containment and some spotting, meaning that the fire embers are traveling away from the main blaze and starting smaller spot fires.

UKIAH, 7/31/18 — Yet another wildfire has broken out in Mendocino County, this time nine miles east of Covelo, near the intersection of Mendocino Pass Rd. and Indian Dick Rd., (a.k.a M1 County Rd.). The fire broke out around 5 p.m. and had already reached 200 acres by about 5:40 p.m. and was growing, with 0% containment. The fire is being called the “Eel Fire.”

A mandatory evacuation has been for a large area along Mendocino Pass Rd. From the Mendocino County Sheriff’s Office:

Undersheriff Matt Kendall elaborated that the evacuation area is about a three mile circle, the center of which is about a 1.5 miles east of the Eel River Work Center, which is also about at the junction of Mendocino Pass Rd. and Indian Dick Rd. About 30 people have been evacuated, and that area is a patch-work of private and National Forest, with more National Forest land to the east.

Kendall pointed out that the extremely dangerous fire conditions mean that this fire will likely grow very quickly. He noted that a fire burned in the same drainage area about 7 to 8 years ago, and there remain a great number of dead standing trees.

Here is a map of that area from the MCSO: 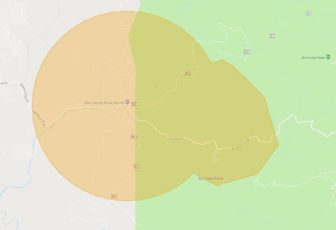 The mandatory evacuation for the Eel Fire near Covelo. From the MCSO.

On two hopeful notes, two “very large air tankers” (VLATs), potentially DC-10s, have already been dispatched from McClelland airbase to hit the fire, and CalFire, as well as the USFS and the Covelo Fire Department all have stations very close to the fire and accessed it very quickly. About ten structures are threatened, and conditions are extremely hot and dry. The fire is burning in dry grass and oak woodland.

Kendall also pointed out that when the VLAT’s do drops, a huge amount of retardant falls very quickly, which can damage structures, cars and hurt people, which is part of the reason for the evacuations. He emphasized that the area is evacuated, and that traveling in that area to see the fire to capture pictures is dangerous and may make accessing the area more difficult for first-responders.

There are reports that this began as a structure fire that spread into the neighboring vegetation, but these are not definitively confirmed. Kendall could not confirm this. 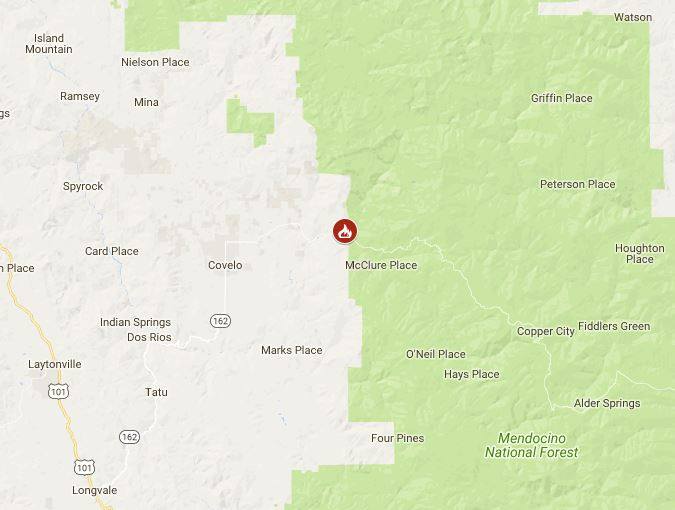 A new fire has broken out near Covelo.