The Western Fire has been fully contained as of this afternoon, and all evacuation warnings have been lifted, thanks to a quick response by firefighters.

UPDATE 9:24 p.m. — CalFire made quick work of the Western Fire. With a tremendous air and ground response the fire capped out at 45 acres, and as of 8:30 p.m. was 50% contained with all forward spread of the fire stopped.

UPDATE 6:15 p.m. — Hwy. 101 remains open as of this time. CalTrans District 1 tweeted out that the highway remains open, and no announcement of a closure has been made.

Here is a map of the evacuation warning zone around the Western Fire: 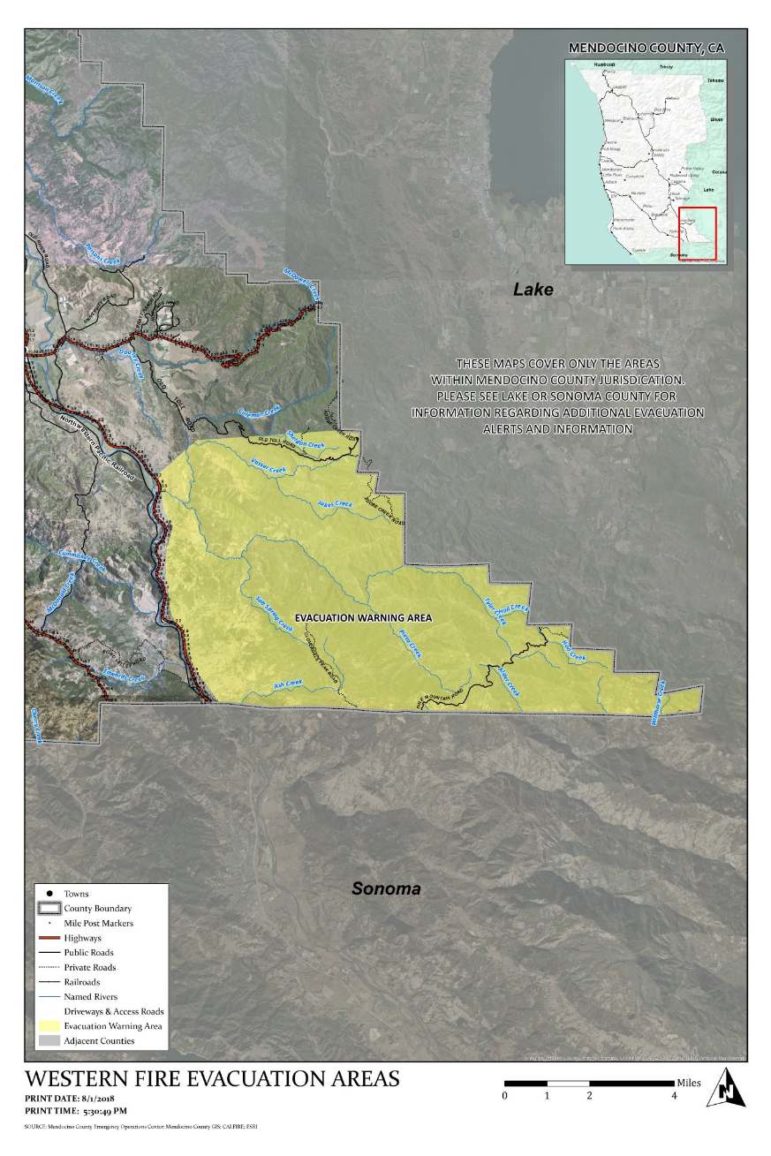 UPDATE 5:30 p.m. — The CalFire incident page now lists the Western Fire as having grown to 50 acres. There is no containment figure. We will continue to update.

UKIAH, 8/1/18 — Mendocino County continues to be pummeled by wildfire, with yet another wildfire, this one called the Western Fire, breaking out. The fire appears to have been started by a motorcycle crash on Highway 101, near Geyser Rd. where the 101 crosses the Russian River. It is burning to the east of Hwy. 101, at approximately mile marker 2.

And evacuation warning has been issued by the Mendocino County Sheriff’s Office:

MCSO is issuing an EVACUATION WARNING for the area of mile marker two (2) on S Highway 101 Hopland, East to the Mendocino Lake County Line, South to Mendocino Sonoma County Line, due to a fire in the area. Residents are advised to be ready to evacuate the area immediately.

If residents feel unsafe, move to a safe location. Further alerts and follow-up notifications will be issued once information becomes available. Please avoid the EVACUATION WARNING area if possible and be aware of emergency workers. #WesternFire

The fire started at about 5 p.m.

Many firefighters have responded and CalFire has send a significant aircraft attack. By 5 p.m. the fire had grown to about 10 acres, but firefighters were making significant progress with dozer lines and aircraft.