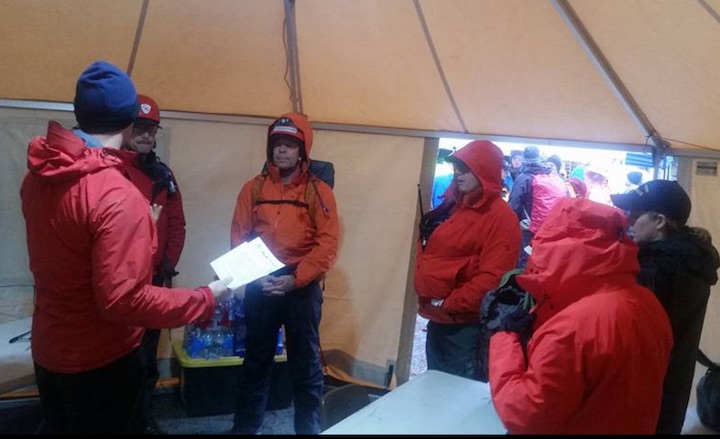 A photo of some of Dow's searchers, who included agency representatives from five different counties, from Sheriff Tom Allman's Facebook page.

Mary Ann Dow was missing for three days after a mushroom picking trip on Branscomb Road.

MENDOCINO Co., 11/26/16 — Mary Ann Dow, the local woman who had gone missing while picking muchrooms earlier this week, has been found, and is safe and alive.

Mendocino County Sheriff’s deputies, along with multi-county agencies assisting on the search, located the 58 year old at around 1:30pm today, Saturday November 26. Dow had been missing for about three days, since Wednesday, after leaving on a mushroom picking trip with a nephew on a remote part of Branscomb Road near Highway 1. 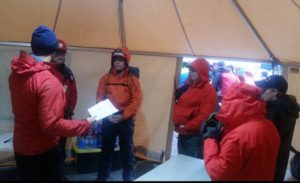 A photo of some of Dow’s searchers, who included agency representatives from five different counties, from Sheriff Tom Allman’s Facebook page.

At least one searcher was injured during the search, which took place during primarily stormy conditions and heavy rains. Dow was last seen around mile marker 7.6 on Branscomb Road, about seven miles east of Highway 1. Authorities were alerted to Dow’s disappearance on the evening of November 3 when the vehicle containing Dow and the nephew did not return as scheduled. Dow had voluntarily separated from her nephew as the two were mushroom hunting in the woods. The original announcement of her disappearance, issued Friday morning, warned that Dow had recently undergone neck surgery that may have prevented her from calling out for help or speaking. 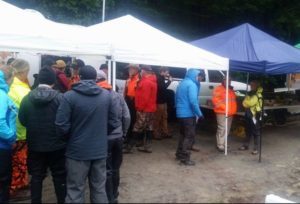 Assisting agencies include the CalFire Mendocino Unit and Napa Search and Rescue, as well as mutual aid resources from Lake, Marin, Contra Costa, Napa, and San Mateo Counties, and search dogs from the California Rescue Dog Association (CARDA), as well as many volunteers. Sheriff Tom Allman wrote in a Facebook post during the search: “Search and Rescue volunteers from 5 county’s are here, in Mendocino County, helping with the missing person in Branscomb. Let that sink in: volunteers from all over Northern California have given up their Thanksgiving weekend to search for this missing person. Words really don’t exist that adequately express my appreciation.” Video from Allman’s Facebook page shows many searchers in rain gear under temporary tents gathered at the main search HQ preparing to look for Dow.