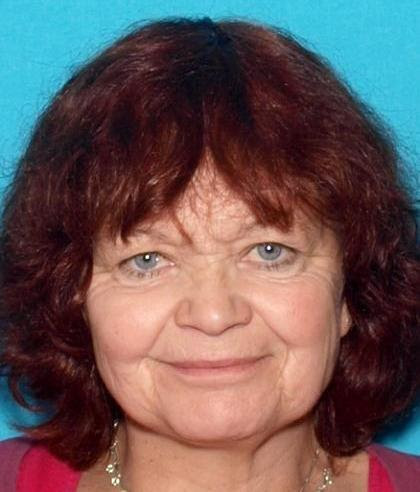 Mary Ann Dow was missing for three days after a mushroom picking trip on Branscomb Road.

Mary Ann Dow has been missing for two days.

Mary Ann Dow has been found, see our coverage.

Mary Ann Dow has been missing since since Wednesday afternoon, when she was lost while mushroom hunting. She went missing about seven miles east of Hwy. 1, off of Branscomb Rd. She may have difficultly talking or calling out due to a recent surgery. Search and rescue teams from several counties have been searching for her.

If you have any information please call Mendocino Count Sheriff’s Dispatch at (707)463-4086.

Kym Kemp has some additional information at Redheaded Blackbelt.

Synopsis: On the evening of 11/23/2016 the Mendocino County Sheriff’s Office received a call of a missing mushroom picker in the area of 7.6 mile marker on Branscomb Road, between Highway 1 and Branscomb.  Deputies were advised that missing person, Mary Dow, went mushroom picking with a nephew that afternoon but did not return to the vehicle as scheduled in the late afternoon.

Apparently the nephew and Dow voluntarily separated around 3:30 PM, as they looked for mushrooms in the thick timber off of Branscomb Road.  The missing person was last seen wearing blue jeans, a gray hooded sweatshirt, and hiking boots.  The missing person is described as being 58 years of age with reddish gray hair.  She is reported to be approximately 4’10” tall and weighing approximately 115 pounds.  The missing person recently had a surgical procedure that may render her unable to speak.  The public is encouraged to approach her if they think they may have seen her as she may not be able to call out for help.

The Mendocino County Sheriff’s Search and Rescue Team searched the area on Thanksgiving but were unable to locate her.  Today (11/25/2016) mutual aid resources from Lake, Marin, Contra Costa, Napa, and San Mateo Counties have responded as well as search dogs from the California Rescue Dog Association (CARDA).

Anyone with information on this missing person case is encouraged to call Mendocino Count Sheriff’s Dispatch at (707)463-4086.

Mary Ann Dow has been missing for two days.