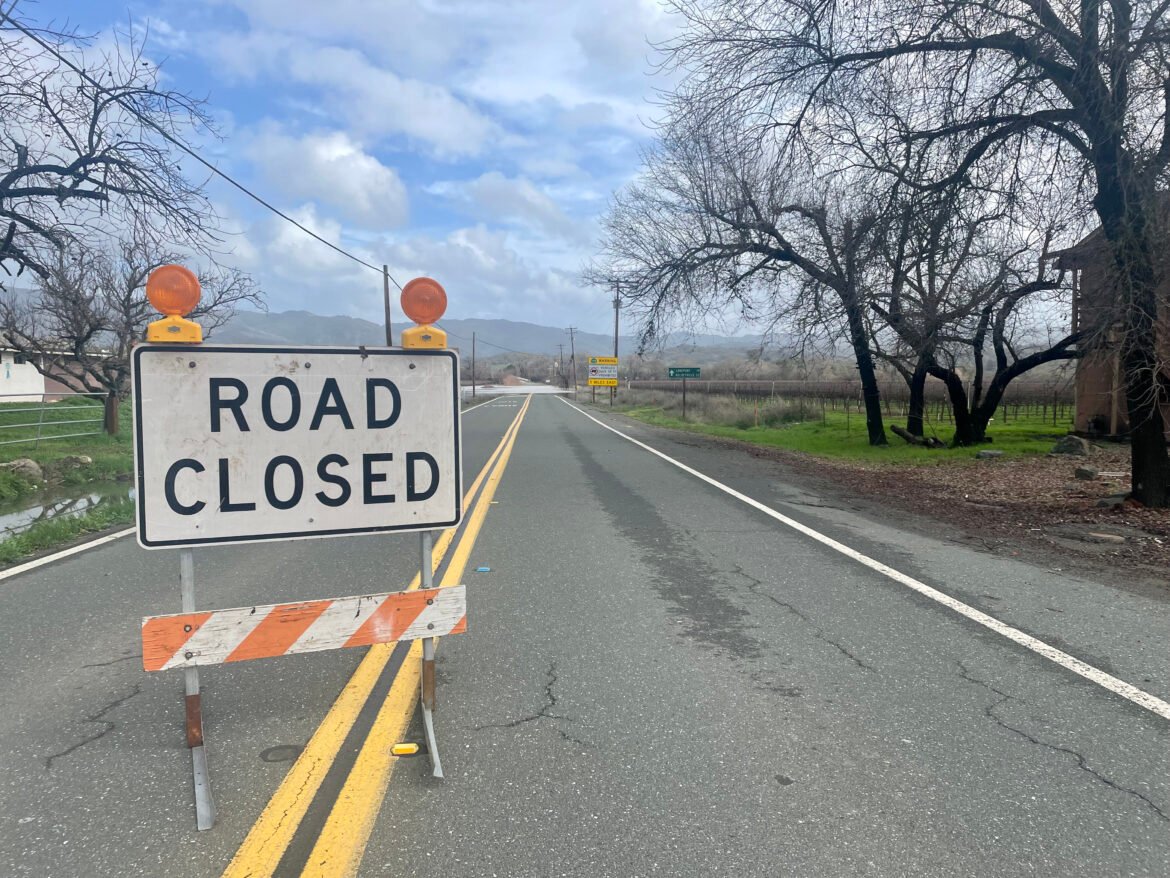 Highway 175 is closed in Hopland due to flooding. (Photo: Serena Alexi)

1/10/23 10:10 a.m. — The Board of Supervisors have unanimously approved the local emergency declaration, and had a brief discussion concerning the county’s response to the storm, with representatives of a number of different county agencies as well as the Sheriff’s Office providing updates. The local emergency declaration covers the storms that began at the end of December, and both the state of California and the federal government have declared an emergency due to these storms as well. You can watch the full supervisors discussion here.

1/10/23 8:40 a.m. — State Routes 175 and 1 have both re-opened this morning, according to the MendoAlert network, but stormy conditions and flooding may continue through the afternoon, due to another storm system bringing rain thunderstorms, and wind. S.R. 128 remains closed from the intersection with 1 to mile marker 12 due to flooding.

The latest Mendocino County forecast timeline from NWS includes additional rain and wind through Thursday, with continued light rain through Sunday, with another storm system arriving Wednesday through Thursday that could also bring high surf to the coast:

1/9/23 7:24 p.m. — Bud Snider Park (also called Willits City Park) is closed due to flooding. The City asks that families stay away from the park, including play structures, until public works has removed the closure signs. Bower Park in Gualala is also closed due to storm damage.

1/9/23 7:18 p.m. — The National Weather Service Eureka (NWS Eureka) announced a Wind Advisory in place starting at 11 p.m. tonight through 12 p.m. Tuesday. Mendocino County can anticipate southeast winds from 20 to 30 mph with gusts up to 50 mph. A Flood Watch still remains in place through noon Tuesday.

1/9/23 5:52 p.m. — After a brief period of reopening earlier today, Highway 1 has been closed, again, after the Garcia River flooded again. Highway 1 is closed from Fisherman Drive, through Point Arena, to just south of Warren Dr. The highway is expected to reopen by 3:45 p.m. on Tuesday, January 10.

1/9/23 3:47 p.m. — The rain won’t be stopping anytime soon in Mendocino County. NWS Eureka reports that thunderstorms may move into the county between 1 a.m. and 4 a.m. Tuesday morning. Residents may experience wind gusts between 40 and 60 mph on the coast and ridges. These winds will continue through Tuesday afternoon, returning midday Wednesday through Friday morning. Rain will continue through the week.

1/9/23 1:25 p.m. — The U.S. Army Corps of Engineers announced that water may be released from Lake Mendocino to prevent flooding. The lake reached 112% of its target water supply curve. Learn more from the Mendocino Voice’s Kate Fishman here.

1/9/23 12:17 a.m. — PG&E held a press conference this afternoon and stated that there are base camps in Gualala and Point Arena. PG&E described Fort Bragg, Gualala, Point Arena and Manchester as having “significant damage.” Over 2,000 customers remain without power in Mendocino County, with over 1,800 without power in Gualala and Point Arena. Spokespeople stated they are hopeful that power will be restored in the next 24 hours. Monitor PG&E outages here.

1/9/23 11:03 a.m. — The City of Fort Bragg reports that PG&E installed backup generators at its substation at Grove and Walnut Streets in downtown Fort Bragg. These generators will provide power to the city in case the main transmission line is damaged during upcoming winter storms. The generators will automatically turn on in the wake of a major power outage.

MENDOCINO Co., 1/9/23 – A third atmospheric river brought rain and gusty winds to Northern California, resulting in countywide flooding, downed trees, rock- and mudslides, and more power outages to an already wet and weary Mendocino County. The Mendocino Voice team will be reporting live all day today on conditions. Latest updates will be posted above!

The National Weather Service Eureka (NWS Eureka) reports that Cahto Peak west of Laytonville saw the highest overnight winds at 69 mph at 1:30 a.m. Monday morning, followed by Bell Springs at 60 mph. These winds, combined with tree roots in saturated soil, caused more downed power lines in the area, creating power outages. New outages in Mendocino, Little River, Caspar, Anderson Valley, and east of Willits are in addition to outages that remain throughout the county from the January 4 storm. PG&E continues to prioritize densely populated areas for re-energizing due to lack of resources, meaning thousands of Mendocino County residents could remain in the dark until January 10. You can monitor outages here.

According to Reuters, President Joe Biden approved an emergency declaration for California as a result of the many storms the state has experienced in the past week. In the past 10 days, the storms have killed 12 people statewide. The declaration allows the state to receive federal assistance to support recovery efforts.

Locally, the City of Point Arena declared a Declaration of Local Emergency due to the ongoing storms on Sunday, January 8. This allows the city to access state and federal disaster funding and assistance. The Point Arena City Hall is operating as a charging, warming and WIFI center, using a generator, from 9 a.m.-4 p.m. daily until power is restored in the region.

A Flood Watch remains in place until 4 p.m., and a Flood Warning until midnight tonight across the county. NWS Eureka reports that the Russian River in Hopland remains flooded at 17 feet, two feet above flood stage. This breaks a record — in January 2019 the river flooded at 16.5 feet. Highway 175 continues to be closed in the area due to flooding. Highway 128 from Highway 101 to Navarro also remains closed due to Navarro River flooding. The Navarro has reached flood stage at 23 feet. It is expected to fall below flood stage, to 16.3 feet, later Monday. Remember to respect road closures and turn around, don’t drown!

Current road closures are as follows per Caltrans:

Please note, estimated times of reopening can change. Be sure to check state road conditions before you travel here.

Weather wise, NWS Eureka expects gusty winds starting tonight and into Tuesday, with more high winds returning later this week. We also might see thunderstorms in the region on Tuesday.

Information is changing rapidly and we’ll be keeping you updated on current conditions throughout the next several days. Although local agencies are preparing for the storm, emergency resources are likely to be stretched thin due to the historic conditions — if you can avoid travel, please stay off the roads for everyone’s safety.

You can read more about the storm’s original forecast in our previous article about this storm, and be sure to bookmark our winter weather information guide. There are additional resources included at the bottom of the article so you can check the exact conditions in your area.

Sandbags are available at the following locations, according to Mendocino County: