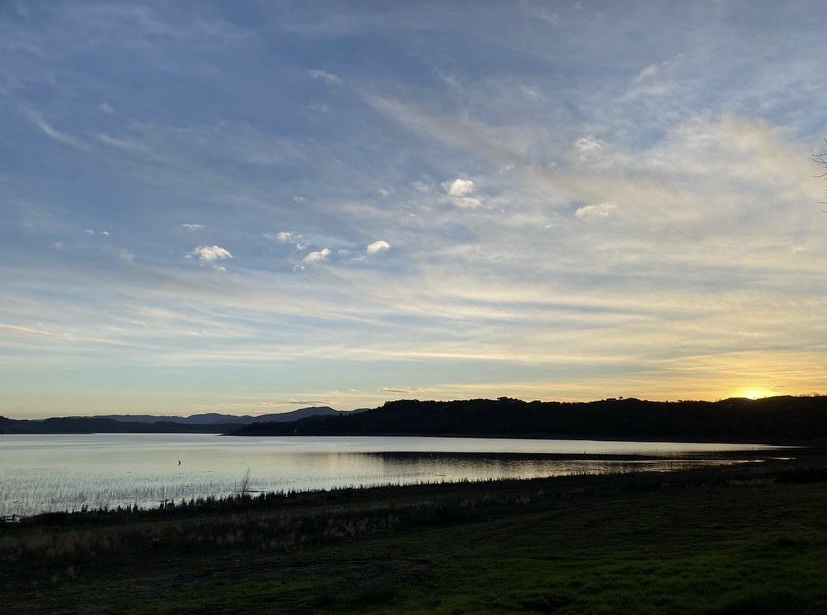 Lake Mendocino, as seen on Jan. 1 in the midde of a couple atmospheric river storms. (Kate Maxwell/The Mendocino Voice)

MENDOCINO Co, CA, 1/9/23 — Lake Mendocino is experiencing substantially increased water levels at the beginning of 2023 thanks to a series of atmospheric rivers hitting the region. According to data published by Sonoma Water, on Monday the lake had reached 112% of its target water supply curve. To prevent flooding, water may be released from Lake Mendocino no earlier than Thursday.

Lake Mendocino and Lake Sonoma and their corresponding dams regulate around 18% of the Russian River watershed, which has experienced flooding multiple times already in the new year. Flooding has, for example, forced an ongoing closure on Highway 175 in Hopland.

The intense storms hearken back to higher-flow years — as the update detailed, “The years-long drought has enhanced the ability of the lakes to simply do what they do, and absorb all of the recent flows and restore historically low lake levels.”

The army corps of engineers does not anticipate a flood control release this week for Lake Sonoma.

“The current outlook, and any changes due to updated forecasts, will continue to be coordinated with Sonoma Water, City of Ukiah, and other partners and communities downstream of our lakes,” the army corps of engineers confirmed.