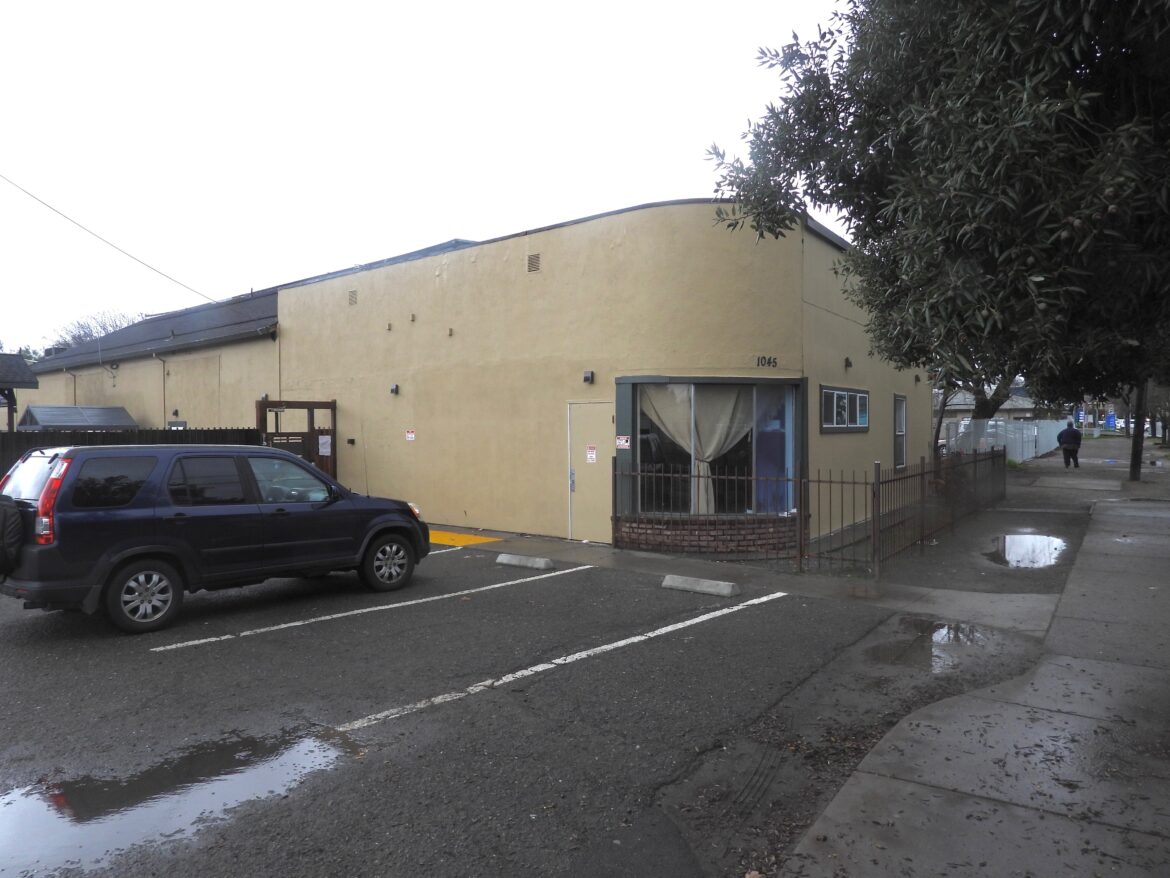 Building Bridges - Homeless Resource Center on South State in Ukiah maintains a low profile in its neighborhood. It is home to 55 permanent beds for the unhoused.

MENDOCINO Co., 1/10/23 — While many of us are snuggled up at home, a dozen or more unhoused people were being turned back out into “atmospheric river” nights, said Ukiah’s Building Bridges Shelter Supervisor Sam Netto.

“And that’s just the ones looking for a bed. There are about 50 more out there who have given up for whatever reason, whether it’s a sense of defeat or the shelter life,” said Netto.

This reporter went to find out how some manage to stay dry while iiving outside.

Being homeless in the rain means some very careful planning, said “Dave,” an unhoused man interviewed in downtown Ukiah between storms. Dave got out of prison a year ago and has been making an effort to get back into the workforce and housing.

“Getting up and going again has been harder than I thought. I just want to work and be a good citizen of my town,” he said. “But it’s difficult, even when people want to give you a chance. There are challenges with getting dressed and ready for work when you are out here. Then there is the question of what you do with this—” he said, pointing to his green duffle. “Everything I own is in here.”

Dave and his friend John were sitting underneath the awning at the Christian Science Society building, located between State and School streets. They were the first willing to talk to a reporter, albeit using only their first names.

With all 55 beds spoken for by homeless people at Ukiah’s Building Bridges Homeless Resource Center, there are nonetheless a few opportunities that open up each day. During the recent storms, which are forecast to continue, as many as 20 people lined up to win that lottery, a bed for the night. Those who lose head back outside.

People admitted to Building Bridges aren’t required to sleep in their bed every night to keep that bed, Netto explained. Some may be out of town, in medical care, or visiting family.

Building Bridges is run by Redwood Community Services, which also runs a wide range of other programs including the county’s mental health crisis services. Sage Wolf, RCS’s Director of Integrated Health, said Building Bridges is intended to act as year-round housing, rather than build a smaller center with a component winter shelter. During the pandemic, Ukiah used the HomeKey program to provide transitional housing for the homeless. Those converted motel rooms make great transitional housing but don’t work for many residents for permanent living. Wolf said the strategy for the future is to offer more long-term solutions, including permanent supported housing, an idea that has shown to be more effective in recent years. Wolf said the governor and the state are aligned to offer more serious solutions to long-term homelessness, and local jurisdictions are being given the tools to make this happen.

Besides providing 55 beds to those registered, Building Bridges also offers services to people like Dave and John, who can come inside and get dry, trade a wet jacket for a dry one (the center will wash and dry the jacket and hand it back out to someone else) and other services as simple as throwing a wet blanket in the dryer. Netto said the center needs donations of everything from socks to plastic bags.

Their site also has extensive information about how funding is done, how demographics are collected and conducts the annual homeless count..

The list of items needed for donation is about the same for Fort Bragg’s Hospitality House, which has 24 beds. It too is full to capacity. Fort Bragg has a winter shelter program involving motel room vouchers, which around 20 people utilized in one night during the recent storms. People come to the Hospitality House at 237 N McPherson St. at 2:30 p.m for the intake process. If a bed is available there, they must take that bed, not wait for a hotel room. Vouchers to the Motel 6 are provided after beds at Hospitality House are used up. The Hospitality Center on Franklin Street is home to offices, intake and resource areas, as well as adjacent transitional housing rooms..

The Fort Bragg City Council has put in place locals-first policies to help its own homeless population. Unhoused travelers who show up for the winter shelter are allowed to stay one night, said Hospitality Center CEO Paul Davis. Then, the police department provides them help leaving town and back to areas where it is believed there is more support. The effort to deal with local homeless but not attract more from elsewhere started when the city became part of a county-led effort to deal with homelessness that culminated in the controversial “Marbut report.” Resource Library :: Mendocino County Homelessness Findings and Data Report.

Different jurisdictions interpreted the Marbut report differently, but Fort Bragg signed on to the part that said local homeless should be dealt with by local governments. The city has had an active program to connect transients with resources elsewhere, while volunteers also work to get unhoused people back home.

One longtime homeless man is now living indoors, caring for his parents in the Pacific Northwest, thanks to a multiagency effort led by the Hospitality Center and the city. There have been other success stories but some have been unhappy when told they can’t stay and utilize the local winter shelter long-term.

Davis said he couldn’t estimate how many people are living unhoused on the Coast. Many people left the area, because of the cost of living and other issues made worse by the pandemic, or so goes the conventional wisdom. However, statistics from 2021 show a six year decline.Healthy Mendocino :: Indicators :: Total Homeless Population :: County

Finding where the unhoused go during the storms was a big challenge. In Fort Bragg, after several hours of heavy rain, two dry people pushing very wet shopping carts were wheeling down Cypress Street around 11:30 p.m. Perhaps understandably they did not respond to a greeting.

This reporter found 12 different homeless people in Ukiah, but most were unwilling or unable to participate in an interview. One man said his name was “poor wayfaring stranger” but was mostly incoherent. One young man ran away at a hello. There were several obviously high people walking the streets of Ukiah last Friday at noon. I was getting nowhere in finding out where the homeless go to stay dry and sleep.

In another era, when there was more widespread compassion for the unhoused population and far fewer homeless people, Roger Miller gave his answer to how “hobos” survived.

“ I know every engineer on every train

And every handout in every town

Every lock that ain’t locked, when no one’s around.”

While Miller sang about the people called bums or hobos in 1965, there were very few of them.  The unhoused are now found in every community. When mental hospitals were closed across the nation, people were sent back to their communities, presumably to local supportive housing and mental health services. But funding for those services never came as promised. The number of patients living in state hospitals dropped from 535,000 in 1960 to 137,000 in 1980. Meanwhile the crack epidemic and homelessness due to bankruptcy and other causes took off in 1980, as documented in a work in the federal National Library of Medicine.

The report also documents how permanent supported housing presents a better solution than short-term shelters. Wolf discussed permanent supported housing projects that local homeless advocates have supported. One is Orr Creek Commons Phase 2, which she said hopes to open in July and will include 20 units set aside for seriously mentally ill homeless individuals, 10 for developmentally delayed individuals and 9 units for general low-income individuals/families.

Dave and John said methamphetamine is one of the prime risks to people living on the streets. John said he can’t stay at Building Bridges because of the dangers of drug use, in a critical tirade about local social services. Dave said Building Bridges does great work, but he is also unwilling to stay there because of people on drugs, especially fentanyl. “I just can’t be around that.” Fentanyl, which can knock flat an addict, or those helping with the overdose,  is often not taken intentionally. Drug dealers lace their methamphetamine with the potent deadly drug, making it far more addictive. This makes them repeat customers but also can kill them and create terrible health and mental problems.

“That’s why I have to avoid all drug users,” said John.

“I don’t care if somebody is having a little pot, but meth, fentanyl and heroin are just dangerous to be around,” added Dave.

Netto said Building Bridges seeks to help everyone and does not turn people away who are not involved in social programs. Nor does it turn away drug users, although drug use inside is prohibited. Netto favors the creation of both low and high bar shelters, the low bar to help everyone and the high bar shelter designed to include only those who have put many challenges behind them and are ready to live and work on their own. Dave said he’d be willing to try such a program. “But that’s just my personal take on it. I’m not speaking for anyone but myself and my thoughts,” Netto said.

Looking into how people lived in the extreme weather led to some very tired and fearful individuals. It also showed how the faith communities in all areas of the county play a major role, although often not as well publicized as the work by local governments and shelters. Couches and rooms also get offered by individuals, some of whom don’t know the homeless person. As to the question of where the homeless go and how they stay dry, even Dave and John weren’t ready to help.

“I have my own spot. That’s not out of selfishness, it’s just pure survival. I don’t tell anybody where I sleep,” he said.  He must start making his way there at the right time and without getting too wet.

“If I get soaked and my bag gets soaked, I’m dead, or at least in big trouble,” he said.

John did not want his photo taken, but Dave was fine with it.

“Maybe somebody will see my picture and it will lead to opportunities. When people get to know me, they will see I’m the kind of person that likes to help and work hard, not create problems.”

5 thoughts on “Just how do the unhoused in Mendocino County stay dry?”