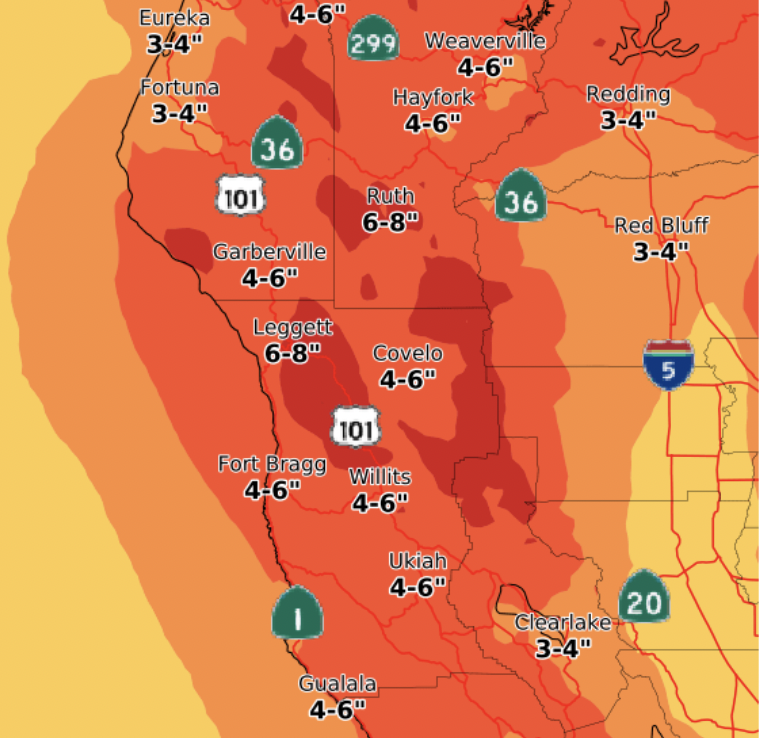 NWS forecast map of precipitation on Friday and Saturday, as of Dec. 28, 2022.

12/31/22, 6:15 a.m. — Highway 1 north of Point Arena is closed from Gasker Slough to the Garcia River Overflow due to flooding. There is no estimated time of reopening at this time. A rock and mudslide has been reported on State Route 20 near milemarker 25, west of Willits.

12/31/22, 4:45 a.m. — Mendocino County residents are waking up to more flooding due to the winter storm. State Route 128 is closed from Highway 1 to Flynn Creek Rd. and State Route 175 is closed from from Highway 101 at Hopland to McDowell Street in Old Hopland, both closures due to flooding. Caltrans District 1 announced that Route 222 in Ukiah has reopened after being closed for almost eight hours due to flooding. A Flood Watch remains in place until 10:00 a.m. Saturday, December 31.

12/30/22, 9 p.m. — State Route 128 will be closed due to flooding from the intersection of Highway 1 to mile marker 12; 162 and 271 remain closed along with a number of other roads in Willits and Ukiah — see additional details in the updates below. There is also a slide reported on 253 but the road is currently open.

In Willits, a vehicle needing assistance has been reported at the entrance to Creekside Cabins and RV Resort, located north of Willits on Highway 101, but crews were able to assist the passengers. Flooding has also closed a number of roads in downtown Willits.

Additional road closures due to downed trees and debris have been reported, and Caltrans, CHP, and county and city crews have been hard at work responding to flooding at different locations and incidents. Please avoid the roads if at all possible, as several rivers are expected to reach flood stages and may lead to additional road closures overnight. If you approach a road that appears flooded, “turn around and don’t drown,” and avoid downed power lines.

Rain is expected to continue into Saturday, and flooding may continue into Sunday as rivers continue to rise after the storm has passed, so residents should prepare for ongoing flooding risks overnight and through the weekend.

Links to current road conditions as well as power outages and more are included at the bottom of this article.

12/30/22, 5:15 p.m. — State Route 162 is now closed due to flooding, north of Grist Creek Aggregates, according the the California Highway Patrol. State Route 271 remains closed, as well as a number of roads in downtown Willits and Brooktrails (see below), and the Moss Cove rest area south of Laytonville on U.S. Highway 101. We have also received additional reports of road closures or flooding on county and private roads — please avoid travel if possible and do not attempt to drive through flooding roadways.

There is the potential for flooding of the Russian River at Hopland, which could impact travel on State Route 175 and 101, as well as flooding of State Route 128 by the Navarro River at Navarro, and the Garcia River near Point Arena, which could close U.S. Highway 1. Additional links for current road conditions and other useful official information is at the bottom of the article.

12/30/22, 3 p.m. — Flooding has begun in Willits and other parts of the county, leading to road closures and other county and municipal roads. The California High Patrol is reporting a number of locations where there is dirt, rocks, or flooding in the road, and so please avoid travel if possible.

State Route 271 is currently closed south of Piercy due to a landslide on the McCoy Creek bridge, according to Caltrans, and there is no current estimated time of reopening”

As of 3 p.m., the City of Willits no longer has sand bags available at the sand pile near the Willits Police Station, and the sand itself is running low. Residents are advised not to drive through any flooded roadways.

More information about current conditions is available at the bottom of the article, and we will continue to update as the storm continues.

UPDATED: 12/30/22, 12 p.m. — It has been raining across the county since last night, and the National Weather Service (NWS) is predicting that several rivers within Humboldt and Mendocino counties may reach flood stage before the rains have receded. A flood watch continues to be in effect for the majority of the North Coast, and the Russian River at Hopland, the Garcia River near Point Arena, and the Navarro River all may flood and lead to potential road closures and other impacts.

NWS is reporting that some areas have received up to four inches of rain since Thursday evening, and rain is currently forecast to continue until at least Saturday morning. Residents should not attempt to drive through flooded roadways but instead should turn around.

We will continue to keep you updated as the storm continues. Additional links for current information on road conditions, power outages and more are included at the bottom of this article.

MENDOCINO Co., 12/28/22 — Another round of rain is in the forecast for the North Coast, following on the heels of Monday’s atmospheric river, and the National Weather Service (NWS) in Eureka is predicting an increased possibility of flooding in the coming days.

As of the time of publication, a flood watch is in effect for the majority of Mendocino County, southern Trinity County, and northern Lake County from Thursday afternoon, December 29, until Saturday morning, December 31. Between two and four inches of rain is anticipated, with up to six inches of rain possible at higher elevations. Snow levels will be higher in elevation on Friday and Saturday across the region. From the NWS flood warning:

“Excessive runoff may result in flooding of rivers, creeks, streams, and other low-lying and flood-prone locations. Storm drains and ditches may become clogged with debris. Rain will increase the risk of rock and mudslides. Area creeks and streams are running high and could flood with more heavy rain.”

In particular, flooding is possible at the Russian River and the Navarro River in Mendocino County, and Mad River and the Eel River at Fernbridge in Humboldt County, according to NWS. The real-time river flow data from the United States Geologic Service is available at this website.

We’ll continue to keep you updated as the forecast develops — and we’ve included a list of official agency websites that you can check for real-time information on your specific microclimate, road closures, power outages, and more.