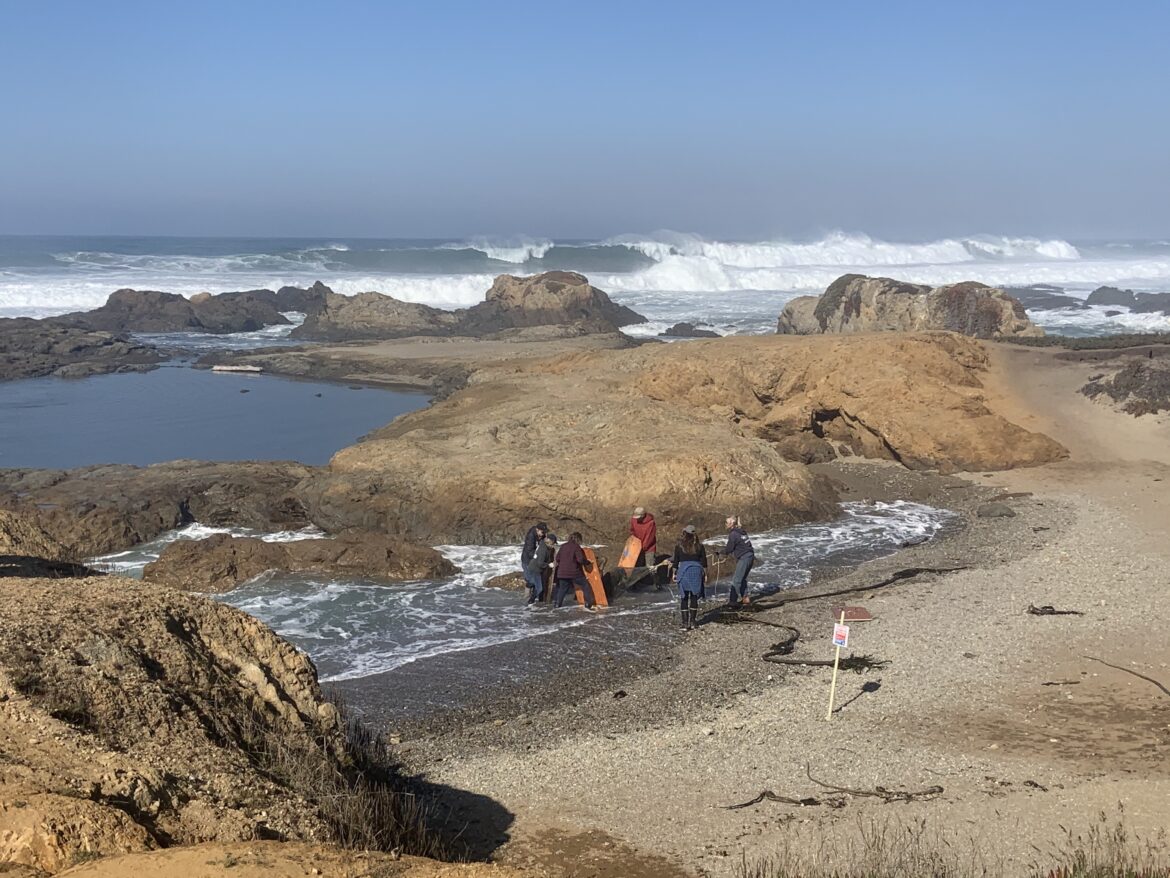 Giancarlo Rulli, a spokesperson for The Marine Mammal Center (TMMC), told The Mendocino Voice that in recent weeks they’ve received a slightly higher volume of calls about sea lions appearing ill, lethargic, or distressed on land in northern Sonoma and Mendocino counties. TMMC takes some 10,000 to 15,000 calls each year from members of the public concerned about marine mammals in its 600-mile response range.

“Adult sea lions are major indicators into the overall health of our oceans,” Rulli said. “They often come in with a wide swath of different ailments. Domoic acid poisoning is one potential ailment; Leptospirosis is a bacterial infection that causes kidney failure, and that is something that is seen this time of year and has become more year-round.”

Domoic acid is a more likely cause of ailments in southern California waters. As for leptospirosis, the cause of outbreaks is unknown but could include a combination of changes in herd immunity, sea surface temperatures, and migration patterns. Other health problems can plague sea lions, too: Around a quarter of sea lions tended to by TMMC are diagnosed with fatal cancer, Rulli explained, and an emerging parasitic disease called sarcocystis causes muscle-wasting in the animals. It’s difficult to give a definitive diagnosis before an animal has been tested at TMMC’s hospital in Sausalito, where today’s sea lion was heading this afternoon.

Volunteers monitored the sea lion once they were notified of his presence on the beach this morning. He was being pestered by ravens but still didn’t move from the rock where he lay. Due to his “below average body condition” — or low weight — and evident lethargy, TMMC gave the go-ahead to attempt a rescue.

Eight volunteers from TMMC and the Noyo Center for Marine Science came to the site — with a big net, a metal crate on beach wheels, and wooden boards for protection — to capture the estimated 200-pound sea lion and transport him by truck to the hospital in Sausalito.

The possibility of sneaker waves, combined with high surf in general, threw an extra wrench into the attempt.

“If she says get out of there, we get out of there no matter what,” said Tanya Smart, a longtime volunteer with TMMC, as the crew assigned one member to watch waves. Planning ahead was important so that they could approach the animal quietly — Smart planned to circle behind him and startle him using her wooden board, so that he’d move off the rock and into a zone where Noyo Center Stranding Coordinator Sarah Grimes could trap him with the net.

The sea lion did not react much as volunteers approached on the beach, but became agitated and flailed around once in the net. (See video on The Voice’s Instagram). From there, maneuvering him into the crate took a concerted effort of pulling line at the end of the net and flanking him with boards. Despite a sneaker wave washing under the group as they began to push the sea lion up the beach, their efforts were a success.

“As the general says, the best laid plans are good until the first shot’s fired — or in this case, the first net’s thrown,” volunteer Stan Anderson said. Luckily, holding on tight to the crate meant no one was pulled out by the wave — and after using wooden planks to slide the sea lion in its crate into the bed of a truck, volunteers debriefed about lessons learned for next time.

After a drive down the coast, the sea lion will “receive a full admission exam where it’ll undergo blood tests, an ultrasound, and a variety of different medical procedures to then determine what the best course of action is for treatment protocol on a given animal,” Rulli explained. Several names are in contention for this sea lion — among them Spooky, Boogie, and Pumpkin Pie as homages to the date of his rescue.

TMMC’s ultimate goal is always to return animals to their natural habitat — but with an adult sea lion in rough shape, that process is likely to take weeks or months.

“Sea lions are incredibly resilient animals, so if they’re coming ashore … that’s a cause for concern,” he said. “The reason that they’re coming ashore is because they’re not able to efficiently feed in the wild, and the disease process is at a point where it’s causing them to not perform normal foraging behavior out in the open ocean, and instead come ashore because they’re too weak and debilitated.”

But even in poor health, these are still large and powerful animals. Rulli cautioned that members of the public should give a sea lion or other marine mammal on the beach a berth of between 50 and 100 feet, as distressed animals can behave erratically.

He also encouraged anyone interested to consider joining TMMC’s volunteer ranks and learn more by visiting the website.

“We are always looking for response volunteers, especially in northern Sonoma and Mendocino County,” he said.

Anyone who sees a possible marine mammal in distress should notify TMMC using its 24-hour hotline 415-289-SEAL.

Editor’s note: An earlier version of this article incorrectly stated that the sea lion was an estimated 500 pounds.