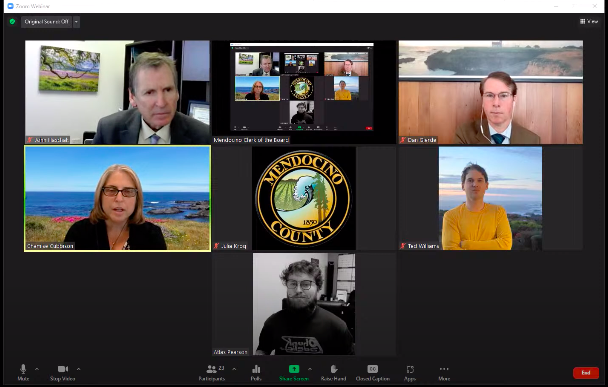 County Auditor-Controller/Treasurer-Tax Collector joins the Sept. 13 Board of Supervisors meeting to answer questions about the county's finances.

MENDOCINO Co., 9/15/22 — The Mendocino County Board of Supervisors asked tough questions about the county’s financial situation in a tense meeting Tuesday with Auditor-Controller/Treasurer-Tax Collector Chamise Cubbison.

The conversation with Cubbison came a month after Board of Supervisors Chair Ted Williams said during the Aug. 2 BOS meeting that he had not seen a credible financial report in the three years he’s been in office. During that meeting, the board unanimously decided to send a letter to the state controller for help with the county’s finances, a move that received fierce criticism from Cubbison, KZYX first reported.

The state controller, after meeting with county supervisors, determined Mendocino County’s finances were a local issue that the Board of Supervisors needed to solve with the county controller, Williams said during the Tuesday meeting. The board devised a list of questions and concerns to ask Cubbison, seeking clarification or a determination whether action was necessary on such items. Cubbison explained during the supervisors’ meeting that the items were briefly discussed with her in a budget ad hoc meeting only a couple days before being brought to the full board Tuesday.

She expressed frustration with the haste of the board bringing the concerns to a full meeting and pushing her and her staff, which is already short-staffed, to work longer hours.

“I guess I’m concerned about the overall approach, I was presented a draft on the screen during a very brief budget ad hoc. At the time I had suggested and requested that the ad hoc take the time to discuss some of those items with me before bringing it to the public,” Cubbison said to the supervisors. “You’re not listening to the information given during the different ad hocs…you continue to demand that staff just work longer and harder.”

The board asked Cubbison questions about the possibility of generating monthly reports and balance sheets for county departments and the projected revenue for the next fiscal year. Supervisors also detailed problems with the county’s accounting software, late county financial reporting, and other questions about Cubbison’s office.

The county may be subject to fines, Cubbison said, but she is not sure if or when the state may impose a fine.

“I’ve had two days to consider answering every one of your questions,” Cubbison said in response to the board asking about potential fines. “The financial transaction was delayed, we’re trying to get the fiscal year end closed…everything is kind of smashed together.”

Williams said the budget ad hoc committee sent an invitation to Cubbinson on Sept. 6 to meet on Sept. 7. At first she expressed unwillingness, according to Williams, but when he asked if she could meet before Tuesday’s board meeting, she joined the Sept. 7 meeting ad hoc group.

During the supervisors’ meeting, neither knew the exact date the report was supposed to have been filed with the state.

The Board also asked Cubbison about the upcoming fiscal year revenue projections. The fiscal year began on July 1.

“Some say the county is in a good financial situation, we may have a net loss year over year, I don’t know, I won’t be surprised if it goes in either direction,” Williams said during the meeting.

Cubbison said she couldn’t answer questions about the upcoming fiscal year because her office is still working to finalize paperwork from the previous fiscal year.

“Until we close the books I don’t know what the carry-forward [from last fiscal year] will be. I think you have revenue forecasts, you have outside consulting firms who have given you forecasts,” Cubbison said. “But I don’t personally have a way right now to give you a crystal ball forecast on this next year.”

Cubbison repeatedly urged the board to bring its concerns to an ad hoc committee so her office could determine who is best to address those concerns and how they can move forward together.

“As far as departments being behind on a regular basis, that is something I’m going to follow up on with [Cubbison],” Antle told The Voice. “It has not come to my attention.”

Cubbison did not respond to requests for comment by time of publication.