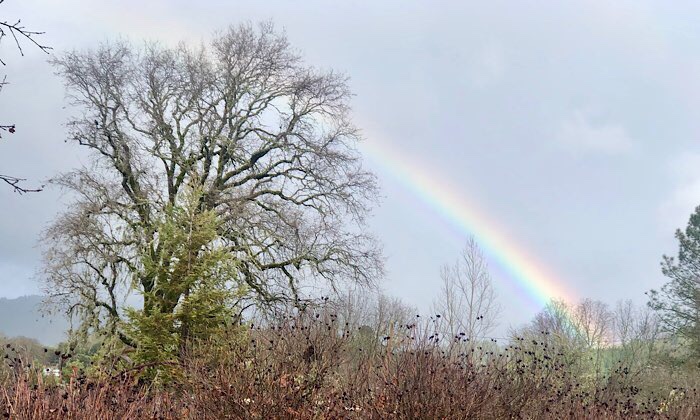 We know it's cheesy, but this was a nice rainbow.

MENDOCINO Co, 9/15/22 — Mendocino County’s got an unusual forecast for stormy weather this weekend with showers possible both inland and on the coast, according to the National Weather Service.

There’s a 20 percent chance of showers in Mendocino County starting after 11 a.m. Saturday, September 17, according to NWS Eureka’s current forecast. Then on Saturday night, showers are expected mostly after 11 p.m., with the likelihood up to 80 percent. Fort Bragg is looking at possible precipitation between a quarter and half of an inch; in Ukiah that amount is a bit lower, with between a tenth and a quarter of an inch possible.

Thunderstorms are likely on Sunday between 11 a.m. and 11 p.m. according to NWS Eureka’s forecast, with the chance of precipitation at 80 percent. A small chance of showers then continues through Tuesday afternoon.

Daniel Swain, a climate scientist who runs the website Weather West, pointed out on Twitter that the unexpected rains could have immediate positive impacts on wildfires currently ablaze in Northern California, such as the Mosquito Fire in Placer and El Dorado counties — now California’s biggest wildfire of 2022. But he cautioned against making a mountain out of a mole hill when it comes to a rainy weekend’s impact.

“It’s indeed very good news from a short term fire weather perspective,” he wrote, but added that “it’s not going to end fire season on its own, and there’s harm in suggesting that it will.”

Find the detailed forecast for your exact area here.