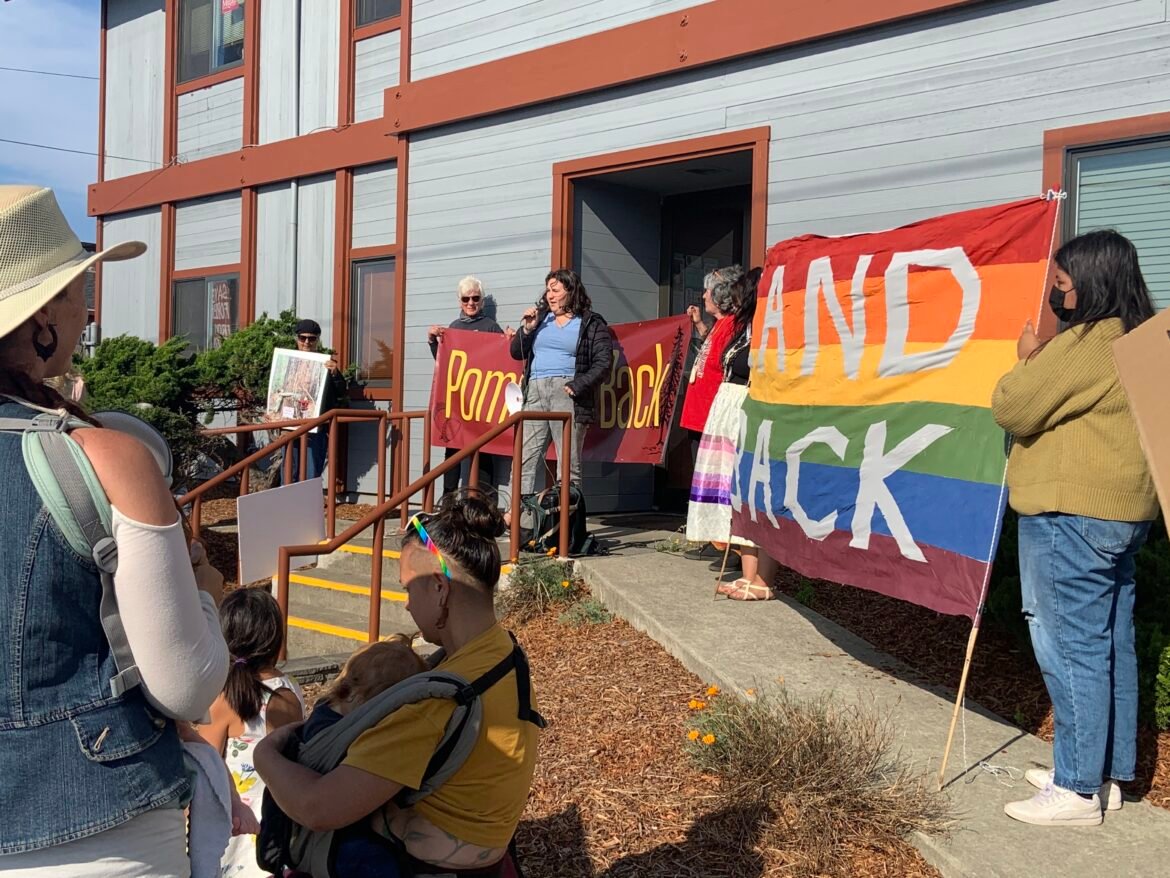 Dozens gathered on the steps of Cal Fire's Fort Bragg station on Monday to call for a moratorium on logging. (Kate Fishman/The Mendocino Voice)

MENDOCINO Co, 8/30/22 — After Cal Fire announced a reopened timber harvest on the heels of professing a vision for tribal sovereignty, the message from activists at rallies in Caspar and Fort Bragg this week was simple: “No more broken promises.” Their next stop is Sacramento.

The phrase expresses frustration from a movement around indigenous stewardship and climate resiliency that had made significant headway this month, as the California Natural Resources Agency (which encompasses Cal Fire) debuted a vision for tribal co-management of Jackson Demonstration State Forest (JDSF). But then Cal Fire announced a plan to resume work this week on timber harvesting plans (THPs) in Jackson. These logging plans had been on pause for nearly eight months during negotiations with the tribes; but Chair of the Coyote Valley Band of Pomo Indians Michael Hunter said Cal Fire did not notify the Pomo before resuming timber harvest, leading him to “question the state’s seriousness about co-managing ancestral lands.”

Though Pomo leaders’ “jaws dropped” when co-management came on the table, longtime activist Polly Girvin — the partner of Priscilla Hunter, the tribal historic preservation officer of the Coyote Valley Band of Pomo Indians — told The Mendocino Voice that what followed felt regrettably familiar.

“We’re so used to being betrayed by state and federal authorities,” Girvin said.

On Tuesday, activists plan to take their frustrations to state authorities with a rally in the capital. Supporters and members of the Coalition to Save Jackson Demonstration State Forest — which includes the Coyote Valley Band of Pomo, Mendocino Trail Stewards, The Environmental Information and Protection Center, Redwood Nation Earth First!, and the Mama Tree Network — plan to head to Sacramento on Tuesday, where they will gather on the CRNA’s steps and call for logging in JDSF to pause again. In the words of 13-year-old climate activist Ravel Gauthier, these united indigenous and non-Native activists hope to show Cal Fire that “surprise tactics aren’t going to work.”

Local actions this week have been well attended, with around 100 people gathering for food, song, speeches, and a quilt raffle at the Caspar Scales trailhead in the forest on Sunday and around 40 marching on Monday afternoon to the Cal Fire building in Fort Bragg.

“What do we want?” protesters of all ages chanted outside the building, which had closed for the day. “Pomo land back! When do we want it? Now.”

Sunday’s event was originally planned to support Mendocino County Youth for Climate (MCYC) — and those young voices shone. One teenager, Suzette Smith from the Manchester Band of Pomo Indians, garnered cheers of support from the audience as she gave a tearful speech.

“I’ve been an activist for protecting sacred sites and trees since I was six years old,” she said. “I would like for Cal Fire to stick to their commitment. … A lot has been taken away from me, and my ancestors, and my family, and my people. It hurts — it really does.”

Cal Fire plans to resume logging first in the Chamberlain Confluence THP, with timber harvest to resume on the Caspar 500, Red Tail, and Soda Gulch THPs as logging companies coordinate schedules. The newly reopened plans come with new caveats — including halting removal of trees over 48 inches in diameter and the permanent protection of large trees to enhance carbon sequestration — but activists hope commercial use of Jackson will end completely.

“We will not let CalFire start once again with business as usual in this forest,” said Sara Rose, a co-founder of MCYC along with Gauthier. “We will stand up and show them as we have time and again that disregarding the community’s concerns, failing to honor the tribes in negotiations, and lying to the public will not be accepted quietly.”

On Tuesday, demonstrators in favor of protecting indigenous sacred sites, conserving redwood forests, and fighting climate change will rally at the CRNA building in Sacramento from 11 a.m. to 1 p.m. before a legislative walk at the Capitol until 4:30 p.m.

“We’ll be here until the forest is safe, and you need to be here too,” Rose said.