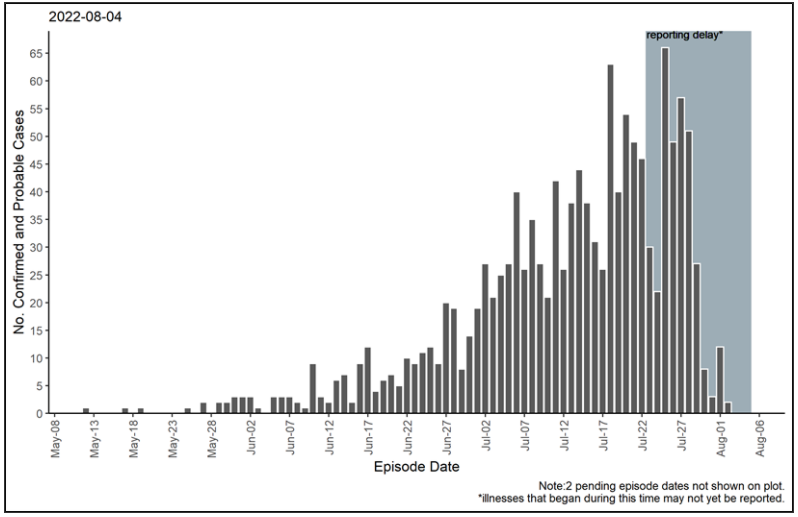 California monkeypox cases reported per day as of Thursday, Aug. 4. Case counts are updated by the California Department of Public Health every Tuesday and Thursday.

There are no cases of monkeypox in the county, said Mendocino County Public Health spokesperson Maya Stuart, and officials want to keep it that way. But because of close proximity to San Francisco, the second-largest outbreak site in the state, county health officials have begun working with local providers to determine testing and treatment strategies.

Mendocino County received a small number of monkeypox vaccines intended for immunocompromised individuals and others who are at high risk for infection, Stuart said. She did not know exactly how many doses the county had available.

The Centers for Disease Control and Prevention considers people with weakened immune systems, children under 8 years old, people with a history of eczema, or people who are pregnant or breastfeeding at higher risk of serious illness or death. The vaccines are approved for people 18 years or older. They require requesting and obtaining single-person emergency use authorization from the Federal Drug Administration for people under 18 who require the vaccine, according to the CDC.

California Gov. Gavin Newsom declared a state of emergency Aug. 1 in an attempt to bolster the state’s access to monkeypox vaccines. The proclamation enables emergency medical services to administer FDA-approved shots, which are in high demand nationally.

The federal government is distributing about 1.1 million doses, over 2 million less than the 3.5 million health officials predict are needed to fight the monkeypox outbreak, the New York Times reported on Aug. 3.

There are 1,310 reported probable or confirmed cases of monkeypox in California as of Friday, Aug. 5, nearly double the cases reported from last week, according to the California Department of Public Health. But only 27 people with confirmed cases of monkeypox are hospitalized. The cases are largely concentrated in Los Angeles and San Francisco Counties.

Neighboring Sonoma County has 14 confirmed cases, according to CDPH. Stuart acknowledged that the virus may spread into Mendocino because of travel to and from larger cities with more outbreaks.

Health officials in the county and state are urging caution and vigilance to mitigate the spread of monkeypox. The virus may start with flu-like symptoms including fever, low energy and swollen lymph nodes, but will develop into painful rashes or sores in one to three days of infection.

The sores will go through several stages before scabbing and falling off. Lesions usually persist for three weeks before falling off and being replaced with new skin. Health officials say individuals must isolate themselves until the skin is fully healed.

One thought on “No monkeypox in Mendocino County yet, officials ramp up prevention efforts”