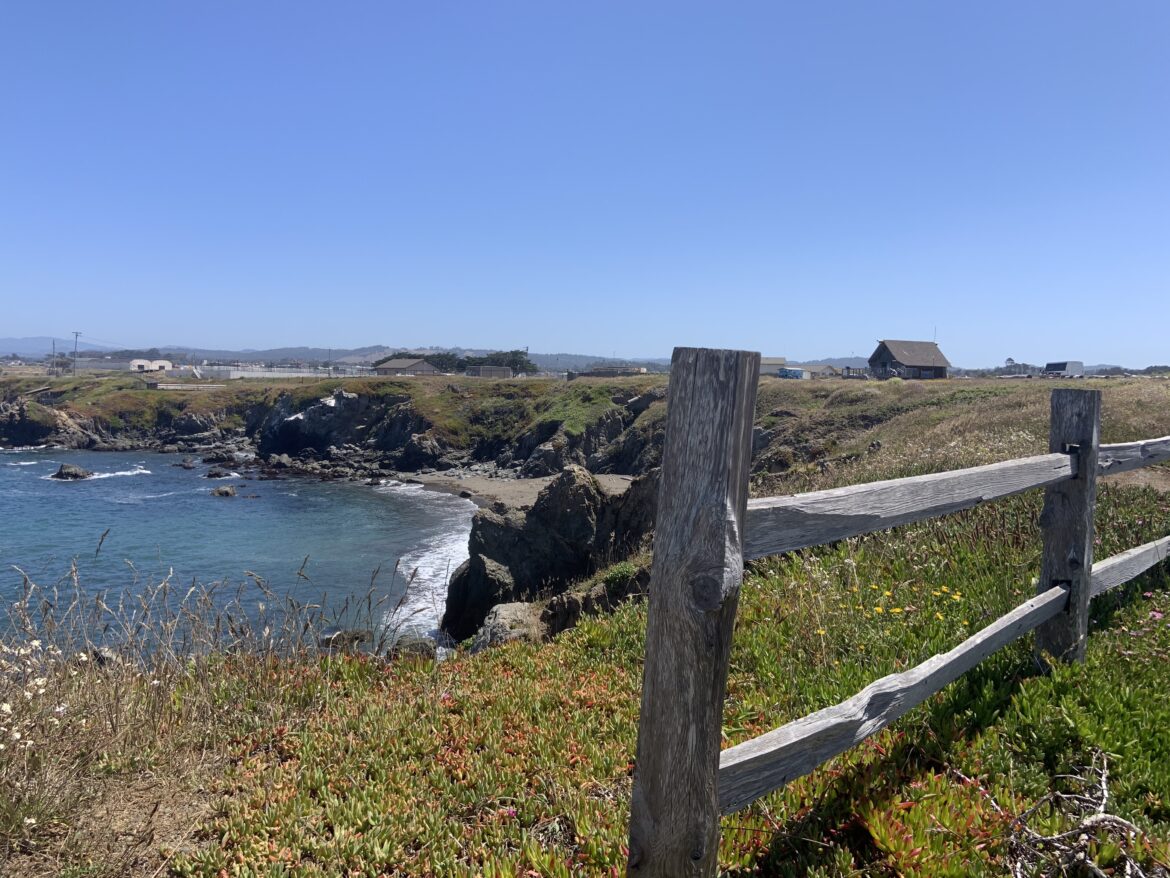 Mendocino Railway submitted a Coastal Development Permit on Wednesday to implement a remedial action plan for ponds on the former Georgia Pacific mill site (visible on the headlands here).

FORT BRAGG, CA, 7/15/22 – The California Coastal Commission closed out several days of meetings in Fort Bragg with a dive into the controversial waters of the Georgia Pacific mill site on Friday, hearing from city officials about their blue economy goals for Fort Bragg and its harbor as well as questioning Mendocino Railway representatives on their plans for the acreage they acquired through a disputed claim of eminent domain.

Public comment was unsurprisingly spirited, as Fort Bragg residents were vocal about plans for the former mill site – and their disdain for Mendocino Railway’s purchase of its acreage. One resident, Andy Mackey, used an original song to express his concerns that Mendocino Railway would take agency over the land away from the Fort Bragg community.

“Well the town folk here have had enough of toxic ponds on the coastal bluffs,” he sang. “GP, Koch, or the little Skunk, someone has to clean this up.”

Mendocino Railway President Robert Jason Pinoli followed that performance, saying “while you continue receiving negative comments — or clever songs — about Mendocino Railway, we’re not some detached company. We’re local, and in my case, fourth generation of this community.”

Vice President Chris Hart said Mendocino Railway has continued to follow the Department of Toxic Substances’ lead and oversight, as well as that of Fort Bragg, and plans to continue that in developing reuse plans, saying, “We will abide by local, state, and federal laws.”

Members of the Coastal Commission, including President Donne Bromsey and Vice President Caryl Hart, asked for clarification on what Mendocino Railway sees as the scope of necessary oversight in its alleged public utility status, but the representatives declined to comment due to the lawsuit. Then, Commissioner Mike Wilson asked whether Mendocino Railway had a building permit for construction he’d seen that morning on a railroad maintenance equipment facility behind Town Hall — which Pinoli said they do not.

“How do you protect public health and safety with relationship to this for adjacent property owners, and even for your own insurance purposes?” he asked. Pinoli said rules and regulations are followed and monitored internally and by an outside safety officer, but that those documents are not available to the public and that there is no Coastal Development Permit for construction on that building. The response drew laughter from the crowd.

In a presentation with Harbormaster Anna Neumann, Interim City Manager Sarah McCormick said that, while the lawsuit is being sorted, the city is continuing to plan for aquaculture land use allowed within the Timber Resources Industrial Zoning on the former mill site land. A varied list of local organizations — the City of Fort Bragg, the Noyo Harbor District, the Sherwood Valley Band of Pomo Indians, Mendocino College, the Noyo Center for Marine Science, and West Business Development Center — have partnered as the Noyo Ocean Collective to explore development ideas centered on the vibrant marine life and restoration needs in Fort Bragg.

“We have started a really fun, visionary plan around opportunities within the blue economy,” she told the commission.

A representative from the local Grassroots Institute said the group had garnered 688 community signatures against Mendocino Railway’s claims of eminent domain, and encouraged the Coastal Commission to support community-driven development of the property.

A section of the former mill site known as Operable Unit E is one of the only parcels that still requires remedial action, according to a presentation from Tom Lanphar, a senior environmental scientist with the Department of Toxic Substances Control. Lanphar explained that the Department has recommended containment by repaired and enhanced dam structure at Pond 8, containment by beach berm at Ponds 6 and 7 and North Pond; and containment by operations and maintenance and land use restrictions for all ponds (including 1, 2, 3, and 4). In a prior report, DTSC said that cost, landfill capacity, and short-term impacts meant removing the substances would not be feasible.

But some residents are unhappy with the plan for containment, and want a more thorough removal of toxic materials — in this parcel, dioxin and arsenic — from the property to make the Soldier’s Bay beach a usable area for the community and ensure protection from hazardous substances.

McCormick explained that Mendocino Railway submitted on Wednesday for a Coastal Development Permit to undergo remediation on that parcel of land. The City of Fort Bragg is the lead agency on the project; Fort Bragg is now seeking proposals from qualified environmental consulting firms to prepare a project-level Environmental Impact Report, with the detailed plan for the scope of remediation work expected to go before City Council for approval at the August 8 meeting.

“We have super support for these big ideas,” Brownsey said to close out the meeting, reiterating that resilience of coastal communities in the face of climate change remains the commission’s top priority.

After the hearing, the Coastal Commission toured the perimeter of the Mill Pond Complex via the Noyo Headlands Trail, enjoying the view from Soldier’s Bay. McCormick pointed out the fenced-off Mill Pond Complex area, as well as the Noyo Center’s “Crow’s Nest” Interpretive Center on the headlands and the land the Noyo Center hopes to use for its large marine center.

The city’s presentation with details on plans for the mill site is available here.