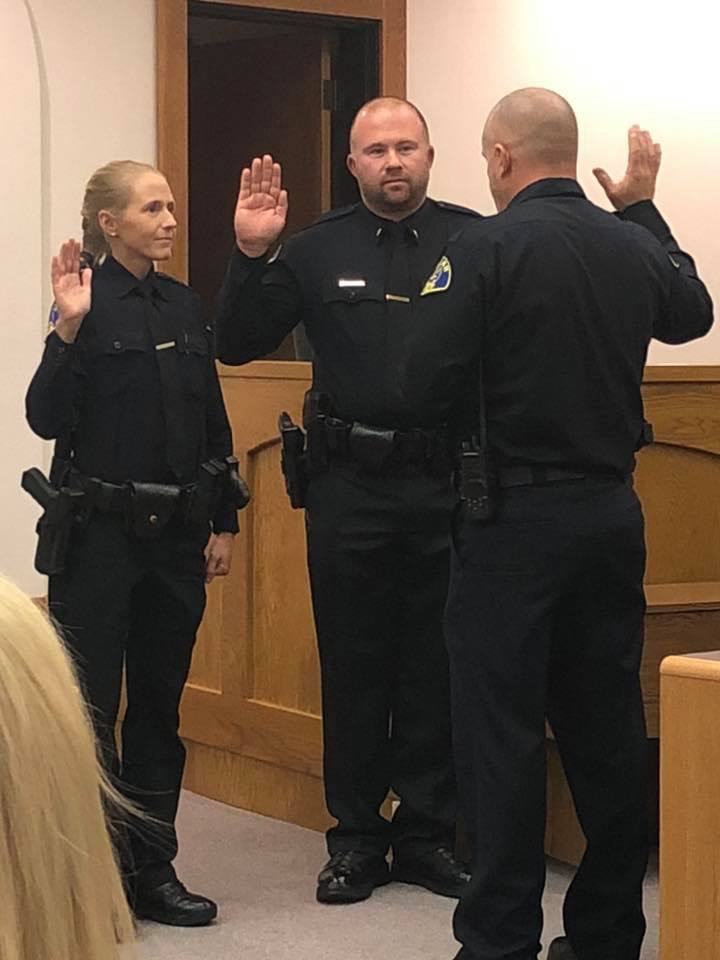 UPDATE, 5/27/22 — Mendocino County Superior Court Judge Jeanine Nadel has punted the defense’s motion to dismiss in Carley vs. County of Mendocino until July. The court issued a tentative ruling Wednesday rescheduling the matter. Neither side showed up for this morning’s hearing as a result.

“The county has abandoned its position that the case has to be mandatorily dismissed,” Amanda Carley’s attorney Richard Freeman wrote in an email Thursday afternoon. Freeman thinks that the county still will seek a future dismissal.

Carley says she still wants her day in court. She is accusing Ukiah Police Chief Noble Waidelich of domestic abuse and other charges in a long-running case. The plaintiff will ask Judge Nadel to set a date for a jury trial at the next hearing, scheduled for 9:30 a.m. Friday, June 10. Today’s hearing regarding the motion to dismiss has been rescheduled for Friday, July 15.

Meanwhile, a second case involving a UPD officer, that of former Sgt. Kevin Murray, has a trial date of July 18, in the courtroom of Judge Carly Dolan. Murray is accused of allegedly assaulting two women. (Another woman is pursuing a civil suit against Murray.) Waidelich’s case is civil and Murray’s is a felony matter, but both men stand accused of physically abusing women and then using their training and experience as law enforcement officers to cover it up. It’s possible their respective cases may proceed simultaneously this summer.

UKIAH, 5/26/22 — Ukiah Police Chief Noble Waidelich has been accused of beating his ex-fiancee and then using witness intimidation tactics and his influence as a cop to escape criminal prosecution. Those allegations come from Amanda Carley vs. County of Mendocino, a civil suit filed in 2017, in which Waidelich is named as a co-defendant. Waidelich and the county have filed motions asking that the case be dismissed, arguing that it still hasn’t gone to trial after five years. Carley has argued that state law requires a six-month extension due to the pandemic’s impact on the courts, and is asking the judge for a trial by jury this summer. If the police chief gets his way, however, it could all come to a close this week.

Wrote Carley’s attorney, Richard Freeman, to the court: “The Motion to dismiss is premature as the five-year statute in this matter does not conclude until October 14, 2022 because of the applicability Emergency Rule 10 of the California Rules of Court, enacted in April, 2020 in response to the Covid Pandemic. Emergency Rule 10 specifically extends the provisions … by six months, which means that the motion to dismiss is not applicable until October 14, 2022. Consequently, the motion is premature and must be denied.”

Public records show the case remained active roughly three years, until February, 2020. Six months after the pandemic struck, courthouse staff literally sent Carley’s file to the basement, and it stayed there until April 25, 2022 — when the defense filed a motion to dismiss. The case currently has its latest (and possibly last) hearing scheduled for 9:30 a.m. Friday, May 27.

Amanda Carley worked for Mendocino County as a probation officer. As a sworn peace officer, she looked up to cops. Sometimes she still refers to herself as one. The job required her to carry a gun, and she worked with high-risk offenders — including individuals convicted of domestic violence offenses. Carley says that didn’t stop her from becoming a victim at home, however, or participating in a cover-up that served to protect Waidelich.

“On more than one occasion Noble reminded me that I should not bother calling the cops because he ‘is the cop,’” Carley wrote in an email Tuesday night. “On one occasion when I did attempt to call for help, Noble took my cell phone and snapped it in half, denying me the ability to reach out for help.”

She and Waidelich met through work, back when he was a detective. They became engaged, but the relationship was abusive. Carley alleges Waidelich beat her, sometimes in front of her children. In 2015 her daughter told a school counselor, who was obligated to report the abuse to Child Protective Services. A “family safety plan” was drafted, prohibiting Waidelich from being in the house with Carley’s daughter, and that plan was signed by a social worker. (Carley’s daughter Madisyn filed her own lawsuit citing substantially similar allegations against Wadelich in December, 2021.)

When word got out, Carley alleges that Mendocino County and the City of Ukiah engaged in a civil conspiracy to protect Waidelich and retaliate against her. The allegations were investigated to some extent, and the probation department conducted a lengthy internal affairs investigation, but Carley says that she became the investigation’s target. Carley initially tried to protect Waidelich, and that was later used against her.

“Now, had I made up the abuse, I should go to jail,” Carley said in a recent interview. But she says that’s not what happened. “They’re alleging that I didn’t disclose [my abuse] the first two times I was interviewed.”

She was placed on leave, interviewed repeatedly, and her boss took her gun — which Carley’s attorney described in court briefs as a “scarlet letter” in the workplace. Records indicate that District Attorney David Eyster even put her on the Brady List —a tool defense attorneys use to track law enforcement officers proven to have lied in previous investigations. The list can be used to disqualify their testimony in subsequent prosecutions.

“I find it particularly disturbing that at NO time did anyone from my department (besides my very competent union representative) ask if my children and I were safe,” Carley wrote.

The county hired Kevan D. Kurt & Associates Professional Investigations to look into the allegations. That agency gained access to a report that UPD Sgt. Andrew Porter had filed earlier; he determined that Carley was minimizing the extent of her abuse: “Amanda stated that approximately 1-2 hours before meeting with Sergeant Porter, Amanda had met with Waidelich in a park where he told her ‘if you don’t say anything … they can’t do anything.’ Waidelich also told her that she would lose her car, home, ability to care for her children and would be homeless if she talked. Amanda told us she did not have any choice but to deny that domestic violence had occurred in her relationship with Waidelich.”

According to Carley, the intimidation tactics worked, and the probation department turned on her as a result. There’s a hierarchy in which detectives trump probation officers, even across different government agencies, and Waidelich enjoyed a level of protection she did not.

“The ramifications of a cop, especially someone who’s been a detective for so long … if he gets exposed for felony domestic violence all of his cases could be appealed,” Carley said. “And that’s understandable. I get it. I don’t want bad guys to get off because of some technicality.”

The allegations against Waidelich have been known to the Ukiah police since at least 2013, when the department hired a private investigator to investigate the rumors, according to Kevan D. Kurt & Associates. Since then Waidelich has been promoted repeatedly, and is now top cop in the city where all this is alleged to have occurred.

Carley was eventually reinstated by her department, but later resigned her position, citing a hostile working environment, and moved to Southern California. She’s suing Mendocino County for creating a hostile work environment, retaliation and participating in a civil conspiracy with the City of Ukiah and UPD to protect Waidelich. There are numerous other allegations. Carley is asking the courts for punitive damages, also known as money, in an amount to be determined at a jury trial. She’s also suing Waidelich for battery and intentional infliction of emotional distress.

“Filing the civil case was the only avenue available to me in seeking justice,” Carley wrote. “Noble has never been held accountable for his criminal actions.”

She wrote: “Eyster chose not to prosecute Noble, citing the ‘lack of credible evidence’ as the reason. Instead, Eyster set his sights on me, condemning me for choosing my family’s safety and well-being as a priority over disclosing the details of the abuse.”

Eyster was named as a co-defendant in a civil conspiracy for his alleged refusal to charge Waidelich, but the court dismissed two of the four counts against Mendocino County’s top prosecutor under Code of Civil Procedure Section 425.16, more commonly known as the “anti-S.L.A.P.P. statute.” (For more information about Strategic Lawsuits Against Public Participation, check out John Oliver’s explainer video posted in November 2019.) Judge Jeanine Nadel granted a motion to remove him from further proceedings in 2018, and that held up on appeal in Carley v. Eyster. It also delayed Carley v. County of Mendocino until Nov. 2019, just before the pandemic, creating an opening for the defense’s recent motion to dismiss the case on Friday morning.

If Judge Nadel dismisses Carley’s case, this could all go away for Waidelich and the rest of UPD with convenient timing. Former Sgt. Kevin Murray’s trial is slated to begin before Judge Carly Dolan in July. Murray has been criminally charged with sexually assaulting two women, including one he pulled over on duty and followed to her motel. Murray also stands accused of sexually assaulting a third victim in a civil lawsuit filed by a former UPD detective.

Copy of the complaint: