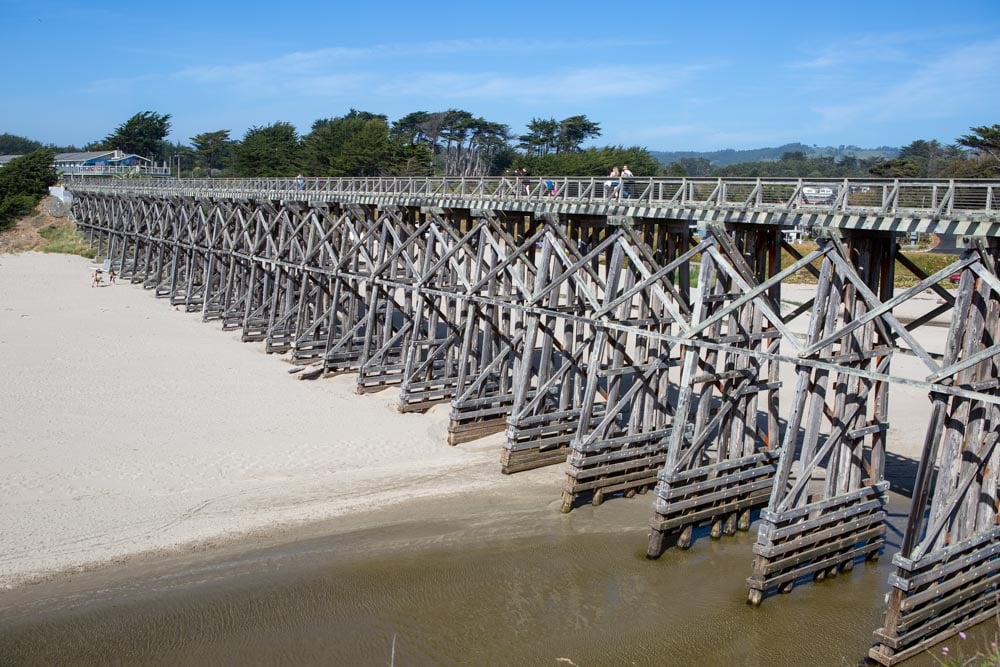 FORT BRAGG, CALIFORNIA, May 23, 2020 -- A handful of people walk across the Pudding Creek bridge in Fort Bragg Saturday. Beaches in the area were mostly empty and filled only with locals. (Christopher D. Pugh)

Update 5/26/22 — Bacteria levels at Pudding Creek Beach in Fort Bragg are no longer above state standards and all warnings about swimming and staying away from the way have been removed. All of the other four beaches on the Mendocino Coast that are tested every Tuesday also came up negative on Thursday, said Marlayna Duley of Mendocino County Environmental Health. Duley said the levels were the lowest at Pudding Creek as possible without being zero.

FORT BRAGG, 5/24/22 — Fort Bragg’s Pudding Creek Beach will continue to have warning signs advising people to stay out of the water at least until after the state’s test results come back this Thursday, according to Marlayna Duley of Mendocino County Environmental Health.

On May 17, for the second time in less than a month, Pudding Creek Beach’s  bacteriological quality sampling results showed ocean water quality did not meet state standards. Five local beaches—Big River, Little River, Pudding Creek, Hare Creek and Caspar Beach—are tested by the county every Tuesday from April to October to determine the presence and levels of three bacteria species that can be harmful to mammals and birds: coliform, E. coli and enterococcus.

None of the other beaches have had a positive test this year, although Hare Creek tested positive in 2021, which Duley believes may have been due to homeless encampments along the creek last year. She said if Pudding Creek tests positive for a third time in 2022, it could warrant a follow-up investigation. The beach has had two positive tests since testing restarted in April. The next testing will be this Tuesday, May 25, with results expected on Thursday.

The tests can’t determine the source or the exact cause of the high bacteria levels. Duley said the events can be caused by sewage getting into runoff. Bacteria levels most commonly rise when high water events occur.

Signs have been posted at Pudding Creek, warning the public to avoid contact with creek and ocean water due to an increased risk to human health. Contact with ocean water should be avoided for 50 yards on either side of the creek drainage where it enters the ocean.

Pudding Creek Beach will remain posted with the warning signs until water quality tests come back that show the area now meets minimum standards specified by the State.

For more information, please contact Duley with the Environmental Health Division at  707-234-6625.