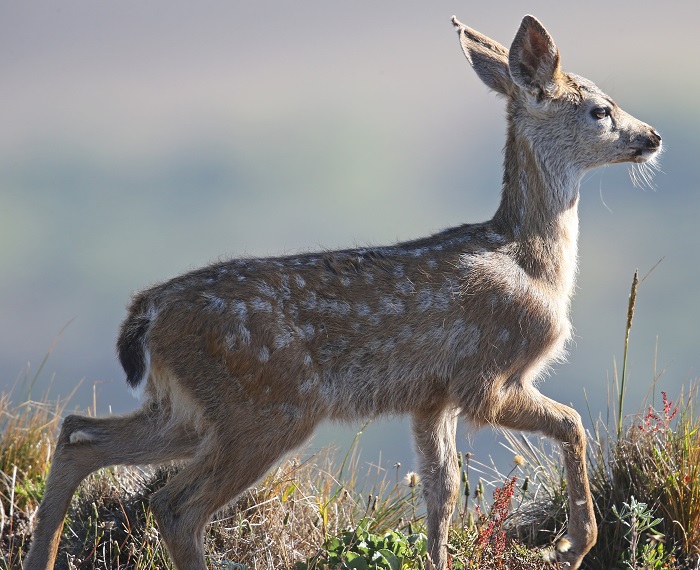 MENDOCINO Co., 4/29/22 — Spring is when the flowers bloom and many different wildlife species introduce their newest offspring to the world — and that can lead to unexpected interactions with humans. The California Department of Fish and Wildlife (CDFW) reminds residents to take extra caution with fawns during this time of year, as adult female deer often leave their young in the brush while they forage. While these fawn may look abandoned, people should avoid interacting with them just the same.

If you come across a deer and the wild and suspect it may be injured, sick, or orphaned, contact your local CDFW regional office directly.

We also want to to remind you to keep an eye out for rattlesnakes as the temperatures heat of (read tips about that here).

Here’s the announcement from CDFW:

Late spring and early summer is the peak time for California’s deer herds to give birth to fawns, and the California Department of Fish and Wildlife (CDFW) is issuing a reminder to well-intentioned people to not interact with the baby deer – even if they find one that appears to be abandoned.

Adult female deer often stash their fawns in tall grass or brush for many hours while they are out foraging for food.

“Each year dozens of fawns across the state have their lives shortened by well-meaning residents,” said Axel Hunnicutt, Siskiyou unit biologist with CDFW’s Northern Region. “For the first several weeks of their lives, young deer are left for extended periods by their mother as a survival strategy. People who interfere with this process always mean well but end up disrupting nature and the life of both mother and fawn.”

Each year, CDFW and wildlife rehabilitation facilities are called to assist with fawns that have been removed from the wild by concerned members of the public recreating outdoors. With limited long-term placement options in zoos or other wildlife sanctuaries, the animals often have to be euthanized since they lack the survival skills to be released back into the wild and can become dangerous and difficult to keep as they become bigger.

It is both illegal to feed deer and keep deer in your personal possession. Both crimes are misdemeanors, each subject to penalties of up to $1,000 and/or six months in jail. Learn more about the dangers and consequences of feeding deer in this CDFW video.