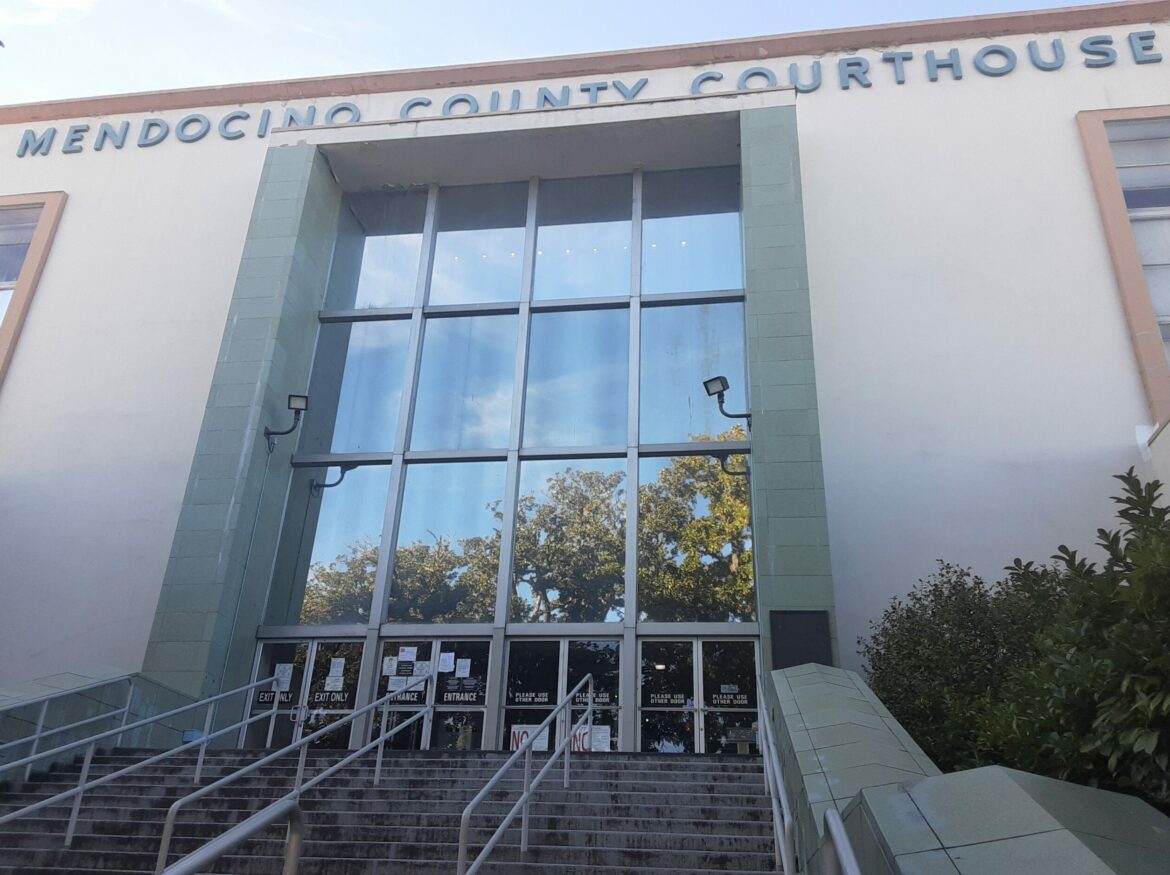 The front entrance to the Mendocino County Superior Court in Ukiah.

UKIAH, 12/2/21 — Three men publicly accused by the California Highway Patrol (CHP) of trafficking children “for the purpose of forced labor at a marijuana cultivation site” this August were actually taking family members to work, their defense attorney said today, and the children were not there against their will. These new details about the case emerged in court arguments during a preliminary hearing this morning at the Mendocino County Superior Court in Ukiah, but the defendants failed to appear, prompting discussion of a bench warrant for their re-arrest.

Avertano Diaz Martinez, a 20-year-old man from Modesto, 24-year-old Fernando Francisco and  36-year-old Abraham Suman Cassilas, both from Santa Rosa, were arrested on Highway 101 Aug. 7. CHP officers patrolling the area south of Laytonville spotted a Honda Accord on the side of the road with its hazard lights on and conducted a welfare check. They allegedly observed “items commonly associated with marijuana cultivation inside the vehicle,” questioned the individuals involved, then turned over two boys ages 15 and 16 to Child Protective Services and took the adults to jail.

The case was reported widely and uncritically in local media. Officer Rick Fowler with the Garberville office of the CHP said the men were arrested for “human trafficking and child endangerment” in the headline of an Aug. 10 press release (below) but they were charged with the lesser felony of using a minor in cannabis work. The child endangerment allegations appear to have stuck, but The Mendocino Voice has reached out to Fowler for comment on his initial characterization of the alleged crimes, and will update this story if he responds.

In court this morning, Deputy Public Defender Daniel Moss argued the victims were “by all accounts willing participants” to the labor in question, that they are related to the suspects, and that the circumstances of these particular allegations are “less egregious than usual.” But his clients were not present for the hearing, prompting Judge Keith Faulder to consider issuing warrants for all three. Faulder acknowledged the defendants have been present for all of their previous proceedings, and elected to wait two weeks before having them arrested again. The hearing was continued until 9 a.m. Dec. 16.  The prosecution will present its case at that time.

You can read the CHP’s initial press release below:

On August 7, 2021, at 3:10 pm, a California Highway Patrol Sergeant and Officer assigned to the Laytonville Resident Post were on patrol in the area of US-101, south of Laytonville, when they stopped for multiple subjects standing outside a 2003 Honda Accord with its hazard lights activated.  The officers contacted the subjects for a welfare check and observed items commonly associated with marijuana cultivation inside the vehicle.  Upon further questioning, the officers learned that 24-year-old Fernando Francisco of Santa Rosa, 36-year-old Abraham Sumano-Casillas of Santa Rosa, and 20-year-old Avertano Diaz-Martinez of Modesto were transporting two male juveniles ages 15 and 16 for the purpose of forced labor at a marijuana cultivation site.  Subsequent to an on-scene investigation, Francisco, Abraham Sumano-Castillas, and Diaz-Martinez were booked into the Mendocino County Correctional facility on felonies 236.1(a) PC – Human Trafficking, and 273a(a) PC – Child Endangerment.  The juveniles were turned over to the County of Mendocino Child Protective Services.