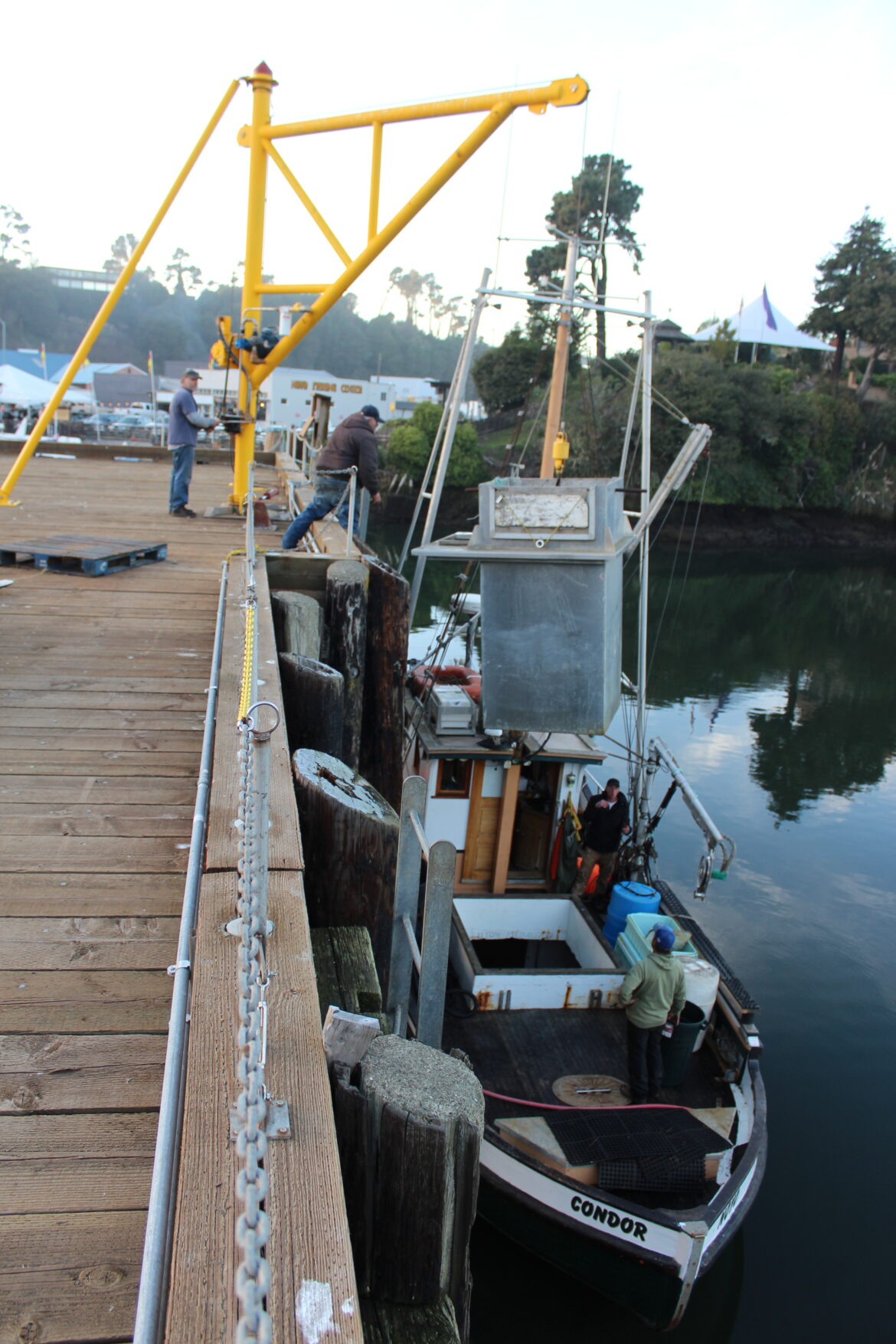 FORT BRAGG, 12/2/21 — Dan Schmidt has been fishing off Ten Mile Beach for the past six or seven years. He says there were always plenty of Dungeness crabs there up until last year. Schmidt put out a couple of test pots that returned zero crabs, so the owner of the Condor decided not to crab at all. This year might not look too different for Schmidt.

The Condor harvested a fraction of what it normally gets for the first pull of the season on the first day of Dungeness crab season Wednesday. With fuel and bait costs, it wasn’t very lucrative, and Schmidt said he’s shifting to black cod and lingcod, which are more cost-effective, unless the season picks up later. “I’ve talked to a lot of other guys that have fished from up here to Shelter Cove and it’s kind of the same scenario,” Schmidt said. “Apparently Crescent City and Eureka have some good volumes of crab, but down here it’s not the same.”

Wednesday marked the first time in seven years that the commercial Dungeness crab season opened on time, and that means locals can have holiday crab for the first time in almost a decade. But it’s still too early to say whether the Dungeness crab population in the area has rebounded compared to last year. The new harbormaster at the Noyo Harbor District, Anna Neumann, said 2020 was an “absolutely atrocious crab season.”

That’s put the kibosh on the typical price strikes and negotiations that accompany the start of the season, Neumann said. Last year, the price of Dungeness crab opened at $3.10 a pound whereas this year it’s opening around $4 a pound. “The prices this year are really high,” Neumann said. “I think that because last year was one of the worst years on record, everyone went through all of their frozen crabs throughout the year to sell to restaurants. So the freezers were all wiped out from all the big supply companies so everyone this year was just desperate for crab.”

But the crab fishery experiences a 10-year boom and bust cycle based on factors like the crab’s life cycle — it takes about three to five years for baby crabs to grow up into the fishery — and ensuring the fishery is managed sustainably. That means you can only fish for male Dungeness crab above a certain size during the designated season.

The Tri-State Dungeness Crab program does quality control testing before the start of the season to ensure the crabs are bulky enough for it to make sense to fish for them, said Christy Juhasz, an environmental scientist with the California Department of Fish and Wildlife (CDFW) who has been working on the management of the Dungeness crab fishery for about a decade. The opening of the season can’t be delayed past Jan. 15, but sometimes crabbers have opted to wait beyond that to allow the crabs to build up biomass.

There are more pounds of crab in the test pots this year than there were last year, but that isn’t saying much. “Last year, we were not reaching the minimum pounds in these test pots,” Juhasz said. “And we didn’t really have that problem this year, so that’s at least indicating we’re going to have a little better season than the last.”

How good the season is for individuals will depend on the number of boats that are out crabbing, Juhasz said. There are about 550 Dungeness crab vessel permits in the state, of which 70% to 80% are generally active during the season. At the Noyo Harbor, there were about 14 to 15 ships out crab fishing on Dec. 2, Neumann said. About 80% of the crab are landed within the first two months of the season, Juhasz added. “We generally see a lot of the effort happening at the beginning of the fishing season,” Juhasz said, “a lot of the landings happen in the short run.”

Schmidt said it’s a disappointing start to the season, but that perhaps the crabs will have more biomass later in the spring, although whale entanglements become a problem around the same time. “The only good sign I saw was there were a lot of short crabs,” Schmidt said, referring to smaller crabs that can’t yet be fished. “So maybe next year might be better.”