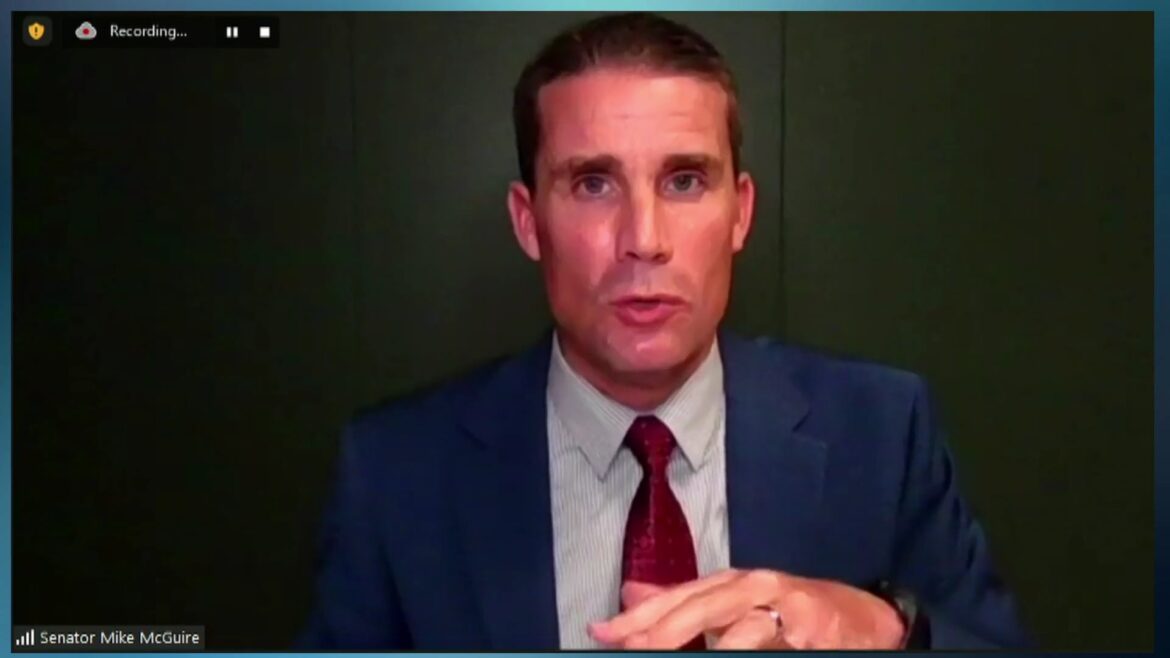 North Coast State Sen. Mike McGuire speaks about the milestones that have been reached in making the Great Redwood Trail a reality in the coming decades during a virtual town hall on Tuesday night.

MENDOCINO Co., 12/1/21 — Plans are well underway to convert hundreds of miles of dilapidated railroad stretching from Sonoma to Humboldt County into the longest rail-trail in the country. At a virtual town hall hosted Tuesday night, North Coast State Sen. Mike McGuire announced some major milestones on the path to making the Great Redwood Trail a reality in the coming decades.

One of the biggest milestones is the state’s appropriation of $10.5 million in this year’s budget to staff up and begin the master planning process, which the State Coastal Conservancy will be in charge of overseeing for the next three to four years beginning July 1, 2022. “So now we have the organization to be able to replace the railroad with the trail and the money to be able to get it done,” McGuire said. “And this is just the start.”

The master plan is expected to take a look at everything from how the 280-mile trail will be constructed and pieced together to how the trail will be kept secure once it’s finished, with a particular focus on the back country stretches of the trail. Some stretches of the trail have tunnels that have collapsed, so planners will have to make decisions around whether it’s feasible to fix them, go around or go over. “I can’t stress this enough,” McGuire said, “every step of the way during the master plan process, the community will be front and center.”

Parts of the trail are already being constructed, mostly in incorporated communities like Willits and Arcata, McGuire said. The Wildlands Conservancy also recently acquired the 29,600-acre Lone Pine Ranch on the Mendocino and Humboldt county line, which the conservancy is opening up to the public. It will be part of the trail. The state appropriated $500 million for projects that help fight the climate crisis and go toward non-motorized trails, which can be used for projects like these, McGuire said. “This is huge news and it’s a game changer,” McGuire said. “It answers the question ‘How the hell are you going to pay for the trail?’”

In September, the state also passed Senate Bill 69, or the Great Redwood Trail Act, which will rename the North Coast Railroad Authority (NCRA) as the Great Redwood Trail Agency (GRTA) and transition its focus from rails and freight to the management of the trail on March 1, 2022. The state budget also appropriated the funds to pay off NCRA’s remaining debt, which was between $10 and $12 million a couple years ago.

One major step that still remains is applying to the federal government to have the rail line railbanked. Railbanking allows railroad lines to be used as trails until rail service resumes with the intention of preserving a right-of-way that would otherwise be lost. The concept was established in 1983 as an amendment to the National Trails System Act.

The NCRA currently owns the rights-of-way to the rail line, but there are several parties interested in keeping the 175.84 miles of rail line traversing Mendocino, Trinity and Humboldt counties as is. The Surface Transportation Board received several letters in support of and opposition to the project, but a couple of major opposition letters came from the Mendocino Railway and a Wyoming-based company known as the North Coast Railroad Company, which both want to keep the rail line dedicated to transporting freight.

There are concerns that the Wyoming-based company, whose lawyers state the company is “capitalized to the tune of $1.2 billion,” is planning on exporting coal to China using the rail line. “We know that this shadowy corporation is worth over a billion dollars and they have put in a competing application with the Great Redwood Trail to federal regulators to start a toxic coal train that will run through our communities,” McGuire said. “Their application will be up at approximately the same time when federal regulators review our bid to be able to railbank the rail line from Willits all the way up to Humboldt Bay, and turn the rail line into a trail.”

“I know that we got the people on our side and we’re going to win,” McGuire said, “but that is a big threat to the Great Redwood Trail.”

You can watch the full town hall here: Facebook.