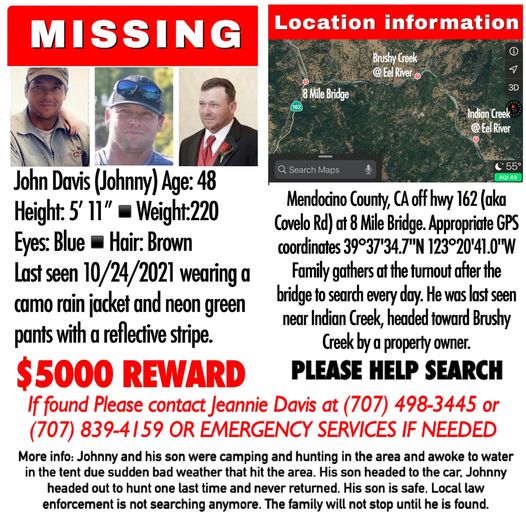 MENDOCINO Co., 12/1/21 — John Davis went missing eight miles up Highway 162 more than five weeks ago, and since then two very different search efforts have taken shape. The Mendocino County Sheriff’s Office (MCSO) says it found new evidence last week during an aerial search, and is planning to send a team in on foot to check it out. MCSO sent crews in during the first few days of the search, but Davis’ family isn’t waiting for them to come back. The civilians are conducting a search of their own, and according to a crowdfunding effort posted by a family member, they’ve been shot at by the locals.

“The public should keep in mind that private property owners have rights that prevent people from unlawfully accessing their land,” Capt. Greg Van Patten told The Mendocino Voice in an email. “This also applies to law enforcement and mainly prevents us from accessing someone’s land without first getting owner consent.”

Van Patten pointed out that deputies could ask a judge to sign a warrant or possibly search private property under “exigent circumstances,” but that would require a reasonable belief that Davis was on that property, alive and in imminent danger. Based on statements from the family, however, they seem to believe those circumstances apply here.

“For the last two weeks it has been just family and friends searching for our brother without the help of (MCSO),” wrote Jenny Lawrence, who identifies herself as the missing man’s sister, last week on www.gofundme.com. “We have been shot at as well as weird messages from people claiming that they have our brother and wanting ransom for his return.”

Nevertheless, Lawrence said her family is looking for a home to rent in Covelo as their search continues. They’re staying in hotels and raising money to cover those expenses, but they also said the proceeds will also go toward Davis’ medical care when they find him. “As the days get longer and the nights get colder, we ask for the public’s help,” Lawrence wrote.

The search and rescue professionals appear to be less optimistic about Davis’ wellbeing.

“It is believed Mr. Davis went missing in the swift water of the Eel River caused by the heavy storm as no signs of him were located in the extensive terrain/land search that lasted for several days after his initial disappearance,” Van Patten wrote. “Due to the extended period of Mr. Davis’ disappearance this is becoming more of a search and recovery mission as opposed to a search and rescue mission.”

They haven’t put a team on the ground in more than a week, but Tuesday, Nov. 23, MCSO searched 15 to 20 miles downriver from Davis’ campsite from the air with assistance from a California Highway Patrol (CHP) helicopter. The aerial team found an item of clothing as well as some material they think may have been part of a raft. Neither of those things are necessarily connected to Davis, but Van Patten said investigators want to look for more evidence in the surrounding area. They’re in the planning stages of another ground search. Meanwhile, the missing man’s family says they will continue to look for him night and day.