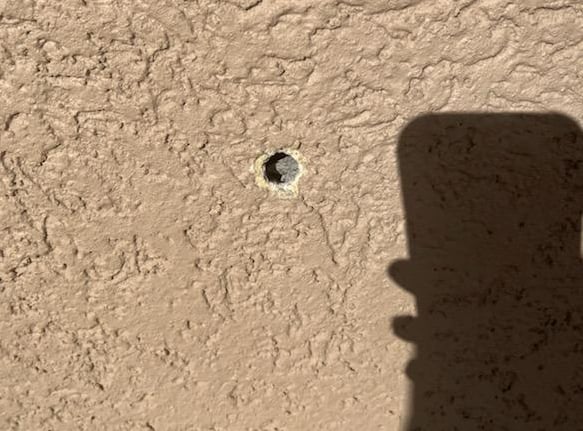 WILLITS, 11/30/21 — An argument led to gunshots Friday morning outside a gas station on Main Street, and the cashier called the cops — but it took multiple phone calls and about two hours for officers from the Willits Police Department to arrive on scene. Now they’re facing criticism from the proprietor, who says officers should have been dispatched immediately. Police Chief Fabian Lizarraga described the incident as a communications breakdown on both sides, but acknowledged that his officers “should have gotten there sooner.”

The shooting occurred outside the AMPM at 898 South Main Street around 6 a.m. Friday, Nov. 26. According to store manager and part-owner Muhammad Zarnoor, roughly a half-dozen individuals from multiple groups were involved in a verbal confrontation in which people started cursing at each other, and then suddenly walked away. Three rounds were fired. Two of them struck the building. The victims ran inside and told the employee on shift he’d been shot at, prompting the employee to call the police — but officers didn’t arrive on scene until after 8 a.m.

“My understanding was it was kind of downplayed. We had trouble keeping him talking, because he was apparently conducting his business like normal when he was talking to us,” Lizarraga told The Mendocino Voice Tuesday, referring to the caller. ‘It didn’t come out as urgent a matter as it should have. We’ll take the hit for not pressing further, I guess, and seeing what was happening or what the guy was seeing, but it was also a communication breakdown on the other side as well.”

“They were just trying to make an excuse,” Zarnoor responded. Regardless of how effectively the cashier communicated the details of the crime to dispatch, Zarnoor argues that officers should have responded. He had to call them a second time to get them on scene. “A customer is coming and telling the guy behind the register ‘someone just shot at me.’ You should just come out regardless of what the cashier is saying, because the cashier can only see so much — he’s inside.”

Zarnoor added this is the first time anything like this has happened at the AMPM since he got involved with the store. An armed robbery was reported at that location in Dec. 2017, however, according to KRCR TV in Redding.

Arrest records show that Willits police booked Joshua Webb Smith into county jail around 5 a.m. Sunday on suspicion of shooting at an inhabited dwelling. Court documents show he was charged with possession of an assault rifle in 2019, although that charge was dismissed as part of a plea negotiation. In that case Smith ultimately pleaded no contest to possession of a firearm while under the influence and was sentenced to 90 days in jail. Chief Lizarraga confirmed Smith is suspected of being involved in the shooting, but investigators are still working to positively identify the shooter.