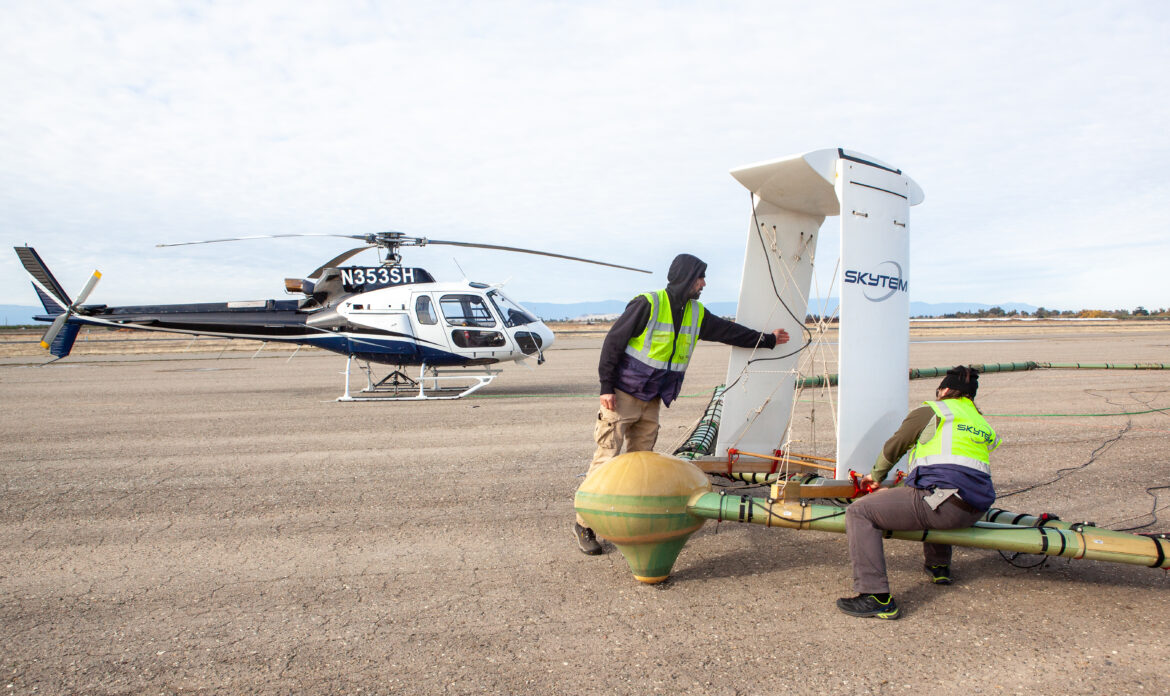 Skytem workers set up surveying equipment on a large hoop frame to be towed by helicopter at Haigh Field in Orland on Dec. 3, 2018. The Department of Water Resources conducted an airborne electromagnetic survey to identify aquifers and possible recharge basins in the Ukiah Valley on Thursday, Nov. 11.

MENDOCINO Co., 11/12/21 — If you were in the Ukiah Valley yesterday, you may have noticed a helicopter towing a giant hoop in the sky. That hoop is equipped with technology that will fill an important data gap as agencies across the state try to figure out how to better manage their groundwater aquifers.

The Department of Water Resources (DWR) flew the helicopter over the area with Nordic company Skytem’s geophysical survey equipment attached to the giant hoop on Thursday, Nov. 11. The signals that equipment sends to and receives from the Earth provide invaluable data about the structure of the groundwater basin and aquifer, but not how much water is inside them, said Katherine Dlubac, who is on DWR’s airborne electromagnetic survey team. “We’re collecting it statewide in all of the high- and medium-priority groundwater basins where data collection is feasible,” Dlubac said. “What we’ll be able to do with it is get a better understanding of the regional large-scale aquifer structure.”

The Ukiah Valley Basin was designated a medium-priority basin based on factors like population growth by the state in the process of developing better strategies to manage the state’s groundwater. The Sustainable Groundwater Management Act requires high- and medium-priority basins to form groundwater sustainability agencies and develop groundwater sustainability plans that ensure the aquifer will be managed in a way that protects it from overdraft and other adverse effects, such as the degradation of groundwater quality. These surveys are being funded by Proposition 68.

The data will be available to the general public about six to eight months after the surveys are complete through the California Natural Resources Agency Open Data Portal. “And we’re hoping to have some simple visualizations available so the general public can easily view the data online,” Dlubac said.

The way the technology works is the equipment sends signals beneath the ground and receives them when they bounce back, gaining information about “the electromagnetic properties of subsurface materials,” said Dlubac. “So information about the materials that are electrically conductive or materials that are electrically resistive.” That data will show the distribution of coarse-grain materials, like sand, and soft-grain materials, like clay, in the subsurface. “And those correlate to areas where we have our aquifers in those coarse-grained materials where water can flow and then in the fine-grained materials, those are areas that inhibit water flow.”

The technology has been around for decades and has been used to map aquifer structures in the U.S. and abroad. Three pilot studies were conducted in California in 2018 to get the program off the ground.

One thought on “WEIRD SCIENCE: The sky hoop will tell us about Ukiah Valley Basin’s groundwater aquifer”