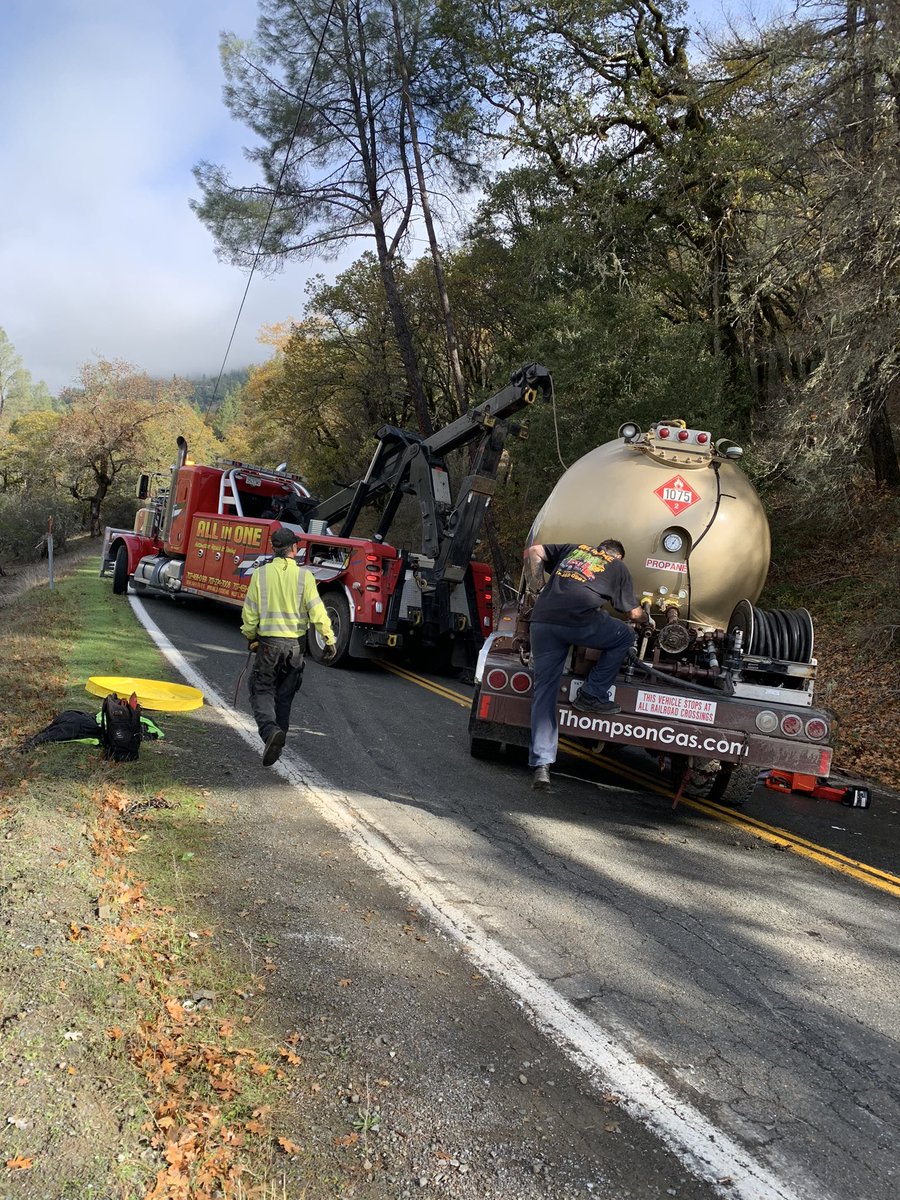 COVELO, 11/11/21 — Highway 162 is now open, Cal Trans said in a Tweet just before noon today. The main path of travel to Round Valley was closed for roughly 48 hours after a delivery truck hauling 2,600 pounds of propane overturned and sprung a leak near mile marker 4, just above Outlet Creek, around 11:35 a.m. Tuesday. The driver suffered minor injuries, according to the California Highway Patrol (CHP) but is expected to recover. Drugs or alcohol were not thought to be a factor in the investigation and there were no criminal charges pending Wednesday.

This situation presented a significant risk of explosion if that fuel had found a source of ignition. The gas displaces regular air, which could asphyxiate people or wildlife nearby. It’s also heavier than air, so it seeks low points in the terrain as it expands. That combination of hazards is not an every day occurrence at crash scenes in Mendocino County.

“It’s really rare,” Kirk Ford with the Redwood Empire Hazardous Incident Team said by phone Tuesday afternoon. “We don’t see a lot of propane trucks crash. This is the second one in 15 years that I can remember.”

Explosion was their primary concern, since the propane cylinder kept leaking. They knew it had to stop eventually, but it really just seemed to slow down. There was a small crack in a pipe, or maybe a ruptured valve, and it kept freezing over as the compressed gas inside expanded in a real-world demonstration of Boyle’s law. The leak slowed to a point where it was negligible, and dropping night time temperatures did not help. They couldn’t safely stop it, though, so they sped it up.

“There’s not really much they can do to patch it but they made the call today to try to open the truck up more, open the valves so we can get things moving a little bit quicker,” Ford said Wednesday. At one point that involved firefighters spraying water on the leak to keep it from freezing over.

There was a frost line on the cylinder showing roughly how much propane remained inside, but it wasn’t really feasible to measure the rate of the leak. At least, not accurately enough to reliably predict how long it would take. They just had to wait it out as a road closure that started Tuesday stretched into Wednesday evening and Thursday morning. But the gas never ignited, and no one but the driver got hurt. Now that the road is clear, the threats of explosion and asphyxiation have passed. The Mendocino Voice asked Ford about the environmental impacts associated with having a hazardous materials incident so close to Outlet Creek:

“Liquid Propane Gas (LPG) wants to be at a gaseous state and not a liquid state in our atmosphere,” Ford said. “Typically for environmental contamination we’re primarily concerned about liquids and solids, like liquids entering our drinking water and affecting aquatic life. This propane is heavier than air, it will condense and get low, so it will go down towards the low areas which in this case would be the river, however, it won’t mingle with the water because it’s a hydrocarbon.”

The incident’s primary impacts on the community may have been traffic related, but vehicles and some supplies were still getting through to Round Valley on back roads. John Clarrey at Keith’s Market IGA in Covelo said this morning that so far one delivery driver had already brought in a small truck on a road from Laytonville today and more were en route. That road isn’t paved all the way, though. It’s too tight for large trucks, which can get stuck and cause other problems. Some shipments were delayed by the closure. Others got through.

“We’re not really out of anything,” Clarrey said around 10:30 a.m., although they were running out of bread. “We’re just getting low.”