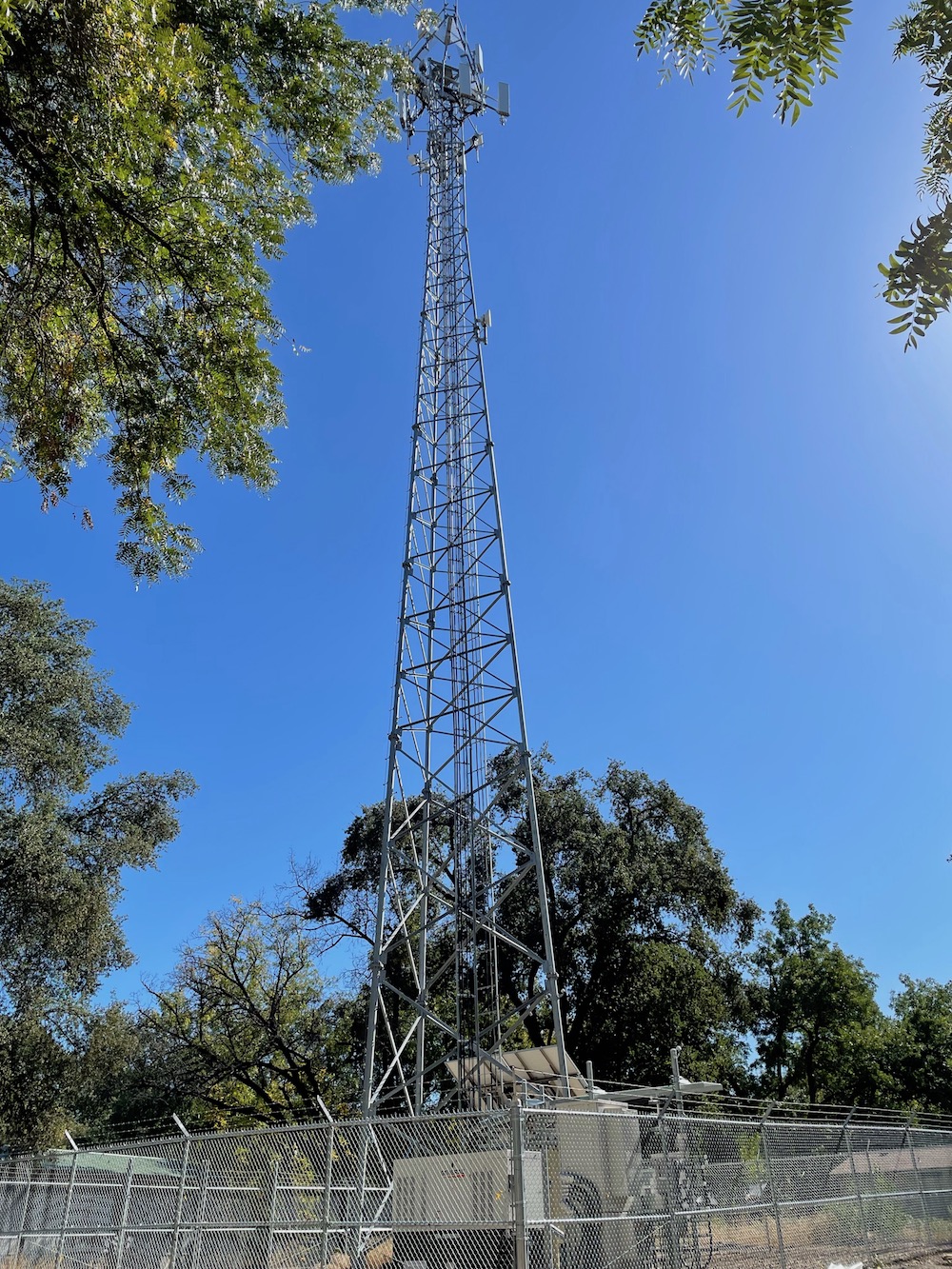 MENDOCINO Co., 10/20/21 — Round Valley residents, and their visitors, know that cell service can be unreliable in the area, and over the several years residents have experienced extended cell service outages that occurred during emergencies. For more than a year, a coordinated effort has been going on led by the Round Valley Indian Tribes, along with local and state officials including District 3 Supervisor John Hashak and State Senator Mike McGuire, the Mendocino County Sheriff’s Office in coordination with US Cellular to upgrade the cellular network and install two new towers.

The inconsistent cellular service has led to numerous incidents where residents were unable to contact emergency dispatchers during emergencies, including wildfires, and addressing the problem has also resulted in periods of no service while equipment was being upgraded and repaired.

In December of last year, plans were finalized for a new wireless tower in the Mendocino National Forest on Big Signal Peak, which is expected to improve cellular connectivity for residents of north county.

The following is an announcement from McGuire’s office:

North Coast, CA – In the past, when residents of Round Valley had an emergency, it was hit or miss if they could get ahold of emergency dispatchers because cell service in this region of Mendocino County was so inconsistent. This reality has put lives in danger and caused public safety nightmares.

For over a year, Senator McGuire has been working with Round Valley Indian Tribal Leadership, Officials from the County of Mendocino, the Mendocino County Sheriff’s Department, and UScellular to construct two additional cell towers and add new equipment to greatly enhance cell service in the region.

“Round Valley has experienced some of the greatest impacts of wildfires over the last few years. And, at the same time, inconsistent and at time’s inoperable cell phone service has hampered emergency response and put lives at risk. When we first heard of this issue, we immediately moved on a fix,” Senator Mike McGuire said. “We’re grateful to the Round Valley Indian Tribes, the County of Mendocino, State OES and UScellular for the partnership. All sides worked together to get these two new towers built and to ensure residents have the service they need to stay connected on a daily basis, but especially during times of emergency.”

The two 150-foot towers that were constructed by the Tribe are strategically located and will improve and expand cellular network capabilities in and around the Valley.

“For too long, the hard working members of the Round Valley Indian Tribes along with Valley residents have struggled with inconsistent cell phone coverage. These two new towers that have been constructed by the tribe and our consultant Spy Ego Media are game changers and we couldn’t have been more grateful to have partnered with Senator McGuire, the County of Mendocino and UScellular to get this job done. We know enhanced cell coverage will help make residents safer, especially in times of emergency,” said Round Valley Indian Tribes President James Russ.

“Ensuring resiliency of our county’s 911 system is the utmost priority. Over the last couple of years during wildfire events, Round Valley’s cell systems became overloaded, which meant residents were unable to call out to 911 or receive inbound calls. This is totally unacceptable. I am grateful to have partnered with Senator McGuire on this critical project that will provide Round Valley residents the coverage they need to keep their families safe,” Mendocino County Sheriff Matt Kendall said.

“Getting these cell towers constructed has been one of my top priorities. The residents of Round Valley desperately need enhanced cell coverage, especially now with the consistent threat of catastrophic wildfires. This project been a total team effort with Senator McGuire, The Round Valley Indian Tribes, State OES, the County of Mendocino and UScellular. With this project now complete, neighbors will be able to stay connected during a disaster and have clear access to 911,” Supervisor John Haschak said.

“By working together with members of our community to provide a great network experience for our customers, we can make sure that local families and businesses have access to the technology they need,” said Anthony Carlson, interim area vice president and general manager for UScellular in the northwest region. “We want to thank everyone involved for their dedication to finding a solution to enhance wireless service in the area, especially our network team who worked tirelessly with local leaders to ensure increased connectivity for this growing area.”