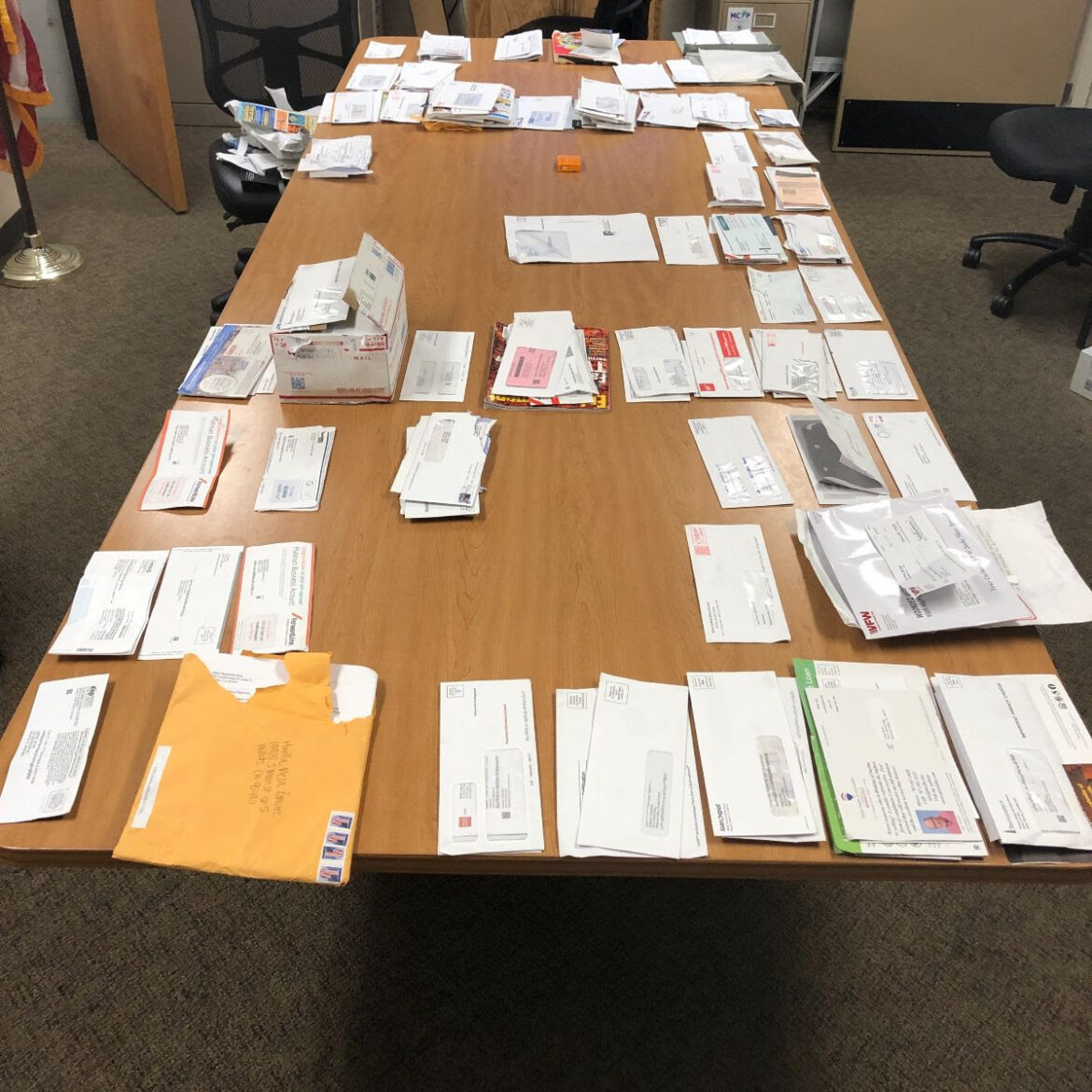 MENDOCINO Co., 10/14/21 — Last month in Potter Valley, a concerned resident called in to report about a suspicious vehicle near some mailboxes around 1 a.m. on Sept. 25. The suspect vehicle sped off when approached, but responding deputies with the Mendocino County Sheriff’s Office (MCSO) found it nearby, and noticed that the driver “came to an abrupt stop prior to him making contact.”

The driver allegedly fled on foot but was identified as Charles Maxfield, a 46-year-old from Willits with an outstanding warrant and multiple prior convictions. Passenger Sharon Kathleen Smith, 43, remained with the vehicle — where deputies allegedly found mail stolen from no less than 100 from the communities of Ukiah, Calpella, Potter Valley, Redwood Valley, Reeves Canyon and Willits. Deputies also found “identifying documents,” blank checks and a laptop with a portable printer.

“A photocopy of a California Identification Card depicting Maxfield was located with the printer,” deputies said in a press release Oct. 11. “The I.D. card contained the full identification of a person other than Maxfield.”

Smith was arrested on suspicion of conspiracy to commit a felony and acquiring false identification with intent to commit fraud. She also had her probation revoked. Maxfield evaded a search of the area, however, and remained at large as of Tuesday.

Maxfield has prior convictions, starting with drugs and violence in 1997. Hewas convicted of multiple vehicle thefts and being a felon in possession of a firearm in 2018. He was sentenced to three years, 8 months in prison, and freed on Post Release Community Supervision (PRCS) this February. A warrant issued for Maxfield’s arrest Sept. 14 — more than a week before the alleged mail theft — says he “absconded and his … whereabouts are unknown.” The document describes Maxfield as a 300-pound Native man standing 6-feet 4-inches tall with brown hair and brown eyes. A photo was not provided by MCSO.

Smith entered a plea of no contest to a misdemeanor charge of being an accessory after the fact during a preliminary hearing Wednesday. An unsigned summary probation order indicates she’s been offered a sentence of 12 months probation plus 20 days time served in county jail and ordered released by the court. In the criminal complaint listing her as co-defendant, prosecutors initially charged Smith with two felonies including unlawful use or transfer of identifying information and conspiracy to commit mail theft. They also alleged she’d been using two-way radios to communicate with Maxfield while they were stealing mail.

You can read the original press release from MCSO below: