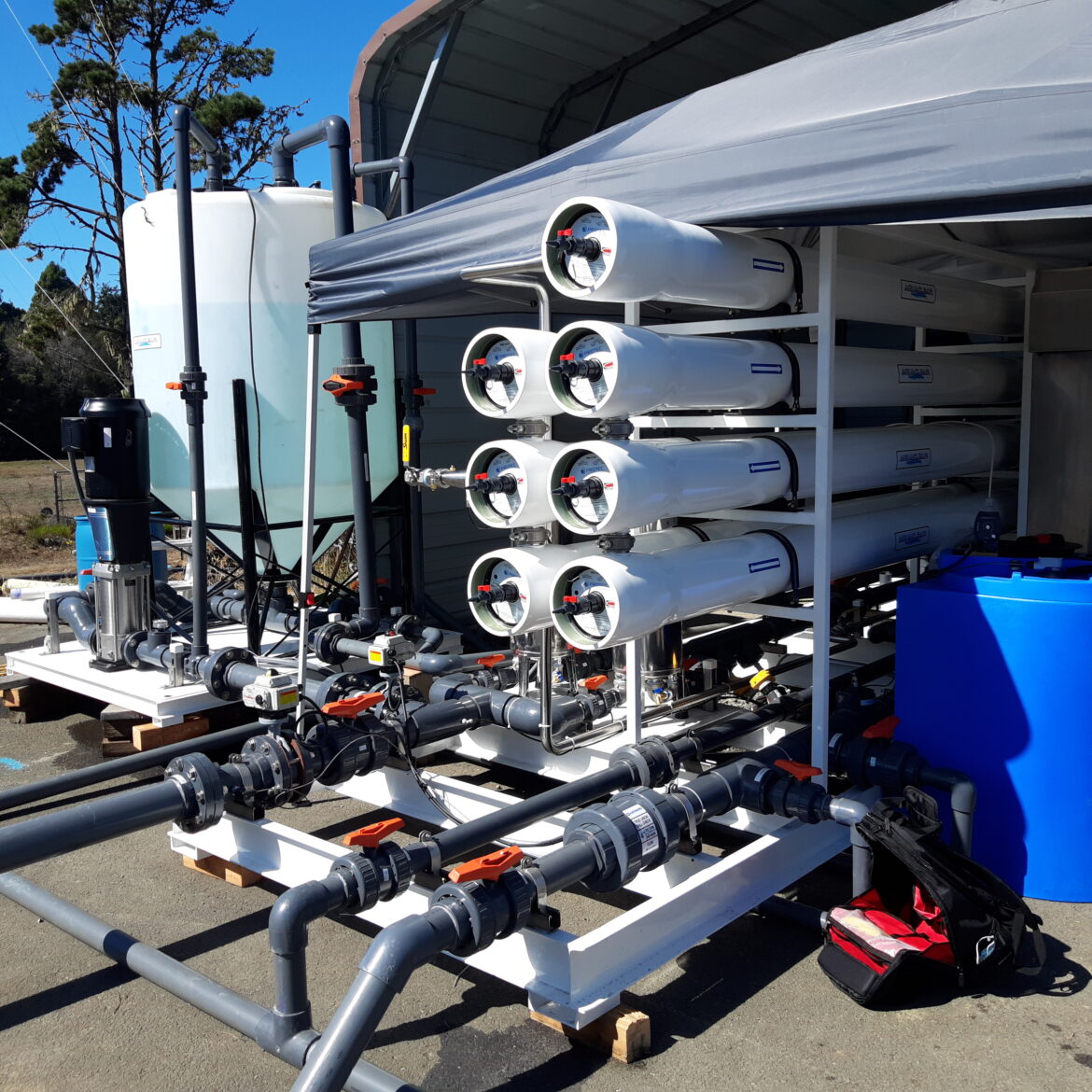 FORT BRAGG 10/6/21 — High tides are here, but Fort Bragg doesn’t have to worry about them making the water from the Noyo River undrinkable anymore. Last week, the city received a new desalination system that will allow it to keep pumping drinking water from the river when tides are high and the streamflow is low. The city doesn’t have to rush to get the system up and running thanks to much-needed rain invigorating the streamflow, but it’s expected to be an integral part of managing water for the city moving forward. The city has a reception planned for this Friday, October 8.

San Diego-based water treatment company Aqua Clear delivered the $335,000 reverse osmosis desalination system to the Fort Bragg water plant on Sept. 23. The system is expected to help the city survive extreme drought conditions that have left the Noyo River, one of its three primary drinking water sources, susceptible to water quality issues during high tide events. High tides lead to saltwater intrusion in the Noyo River all the way up to the city’s water intake pumps whenever the streamflow falls below 1.5 cubic feet per seconds (CFS).

The streamflow in the Noyo has been below 1.5 CFS since mid-July, far below its usual 5 to 6 CFS around this time of year. The situation noticeably improved after the rain in late September, which brought the streamflow up around 5 CFS before dipping to about 2 CFS, where it was resting as of Wednesday, Oct. 6. “The river flow is a great help,” said city of Fort Bragg Public Works Director John Smith. “The fresh water is diluting the saltwater, improving water quality.” Even if the system isn’t needed today, it’s setting the city up to address water scarcity issues in the future as droughts become more extreme.

Desalinating brackish water is becoming an increasingly cost-effective way to access water as freshwater becomes more scarce and costly, said Dr. Pei Xu, professor of civil engineering at New Mexico State University and an expert on water technology. Desalination relies on reverse osmosis, in which semi-permeable membranes are used to filter out the majority of dissolved substances and pathogens and leave behind drinkable water. Right now, that process can still end up being costly when accounting for energy consumption, pretreatment and waste disposal. “For reverse-osmosis membranes,” Xu said, “we use high hydraulic pressure to overcome the osmotic pressure that’s due to the high salinity that’s in the water, so the energy consumption would be high.”

The cost for Fort Bragg to desalinate water from the river is less than it is for municipalities desalinating ocean water because the water the city’s treating has less salinity, Smith said. “The water comes from high up the Noyo River,” Smith said, “so it’s not the salt content that you would see from the ocean.” Seawater, for instance, has 35,000 milligrams of total dissolved solids (TDS) per liter, which means it’s very salty. “What we’re pulling is about 2,500 at most,” Smith said.

In any case, Xu said using solar power can reduce the cost of the energy, and that researchers are also developing new membranes and membrane configurations that are expected to reduce the cost of desalination in the future. She expects the technology to become much more widely used as people have less freshwater options and turn to treating brackish groundwater, industrial water and wastewater.

One of the main challenges of desalination is disposing of the brine resulting from the filtration process in an environmentally friendly way, Xu said. Right now, it’s common for coastal communities to discharge the brine into the ocean. In Fort Bragg’s case, Smith said the city’s wastewater discharge permit covers the city’s ability to dispose of the brine.

The city is expecting another water treatment device to arrive shortly. That one’s expected to treat the groundwater from Redwood Elementary School, primarily using cartridge filtration, another method for collecting different-sized particles from the water, Smith said.

The City of Fort Bragg is hosting an informal reception and ribbon cutting ceremony for the system at 2 p.m. Friday, Oct. 8 at the city’s Corporation Yard at 31301 Cedar Street in Fort Bragg.