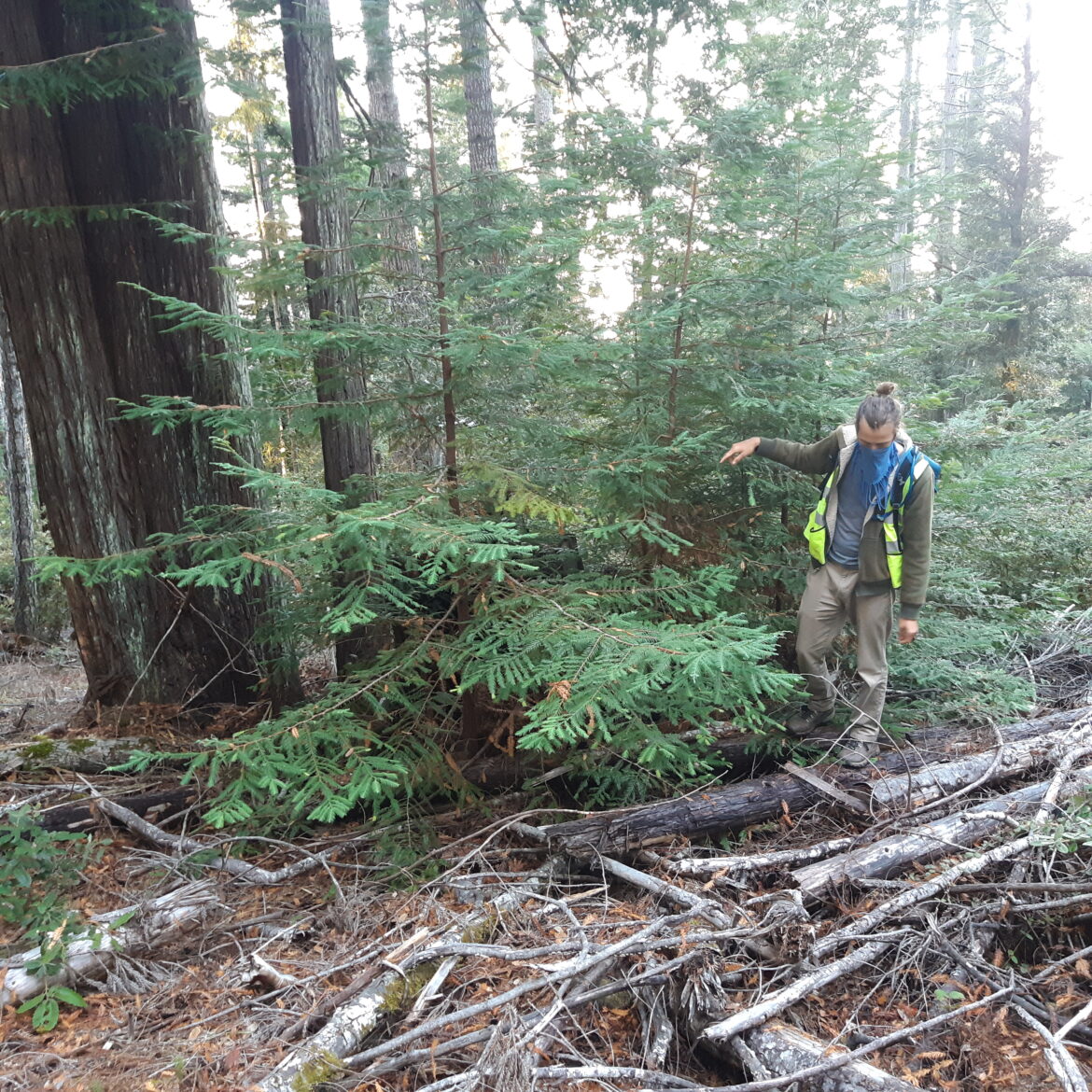 An activist named Alder stands on logging refuse in the area of the Soda Gulch timber harvest plan (THP) in Jackson Demonstration State Forest on Wednesday, Sept. 29. The activists shut down logging in the forest last week, their second successful attempt at stopping cutting in the forest since June.

“We’re trying to ultimately have this be a forest reserve,” said one of the activists, who didn’t want to be identified but went by George.

Logging operations for the Soda Gulch timber harvest plan were put on hold because one of the contractors hired by Cal Fire was injured as a result of the activists’ presence at the site on Tuesday Sept. 28, said Cal Fire Chief Kevin Conway, who manages the state forests program and is the acting manager of Jackson State. Conway didn’t give details about the nature of the injuries or the condition of the worker, but said an investigation is ongoing. “I plead with the public that those closure orders are in place to protect both the public and our contractors during active timber operations,” Conway said. “Those are very hazardous operations and I just plead with you to heed the forest closures when they’re in place.”

However, activists said it was really the Cal Fire employee and Cal Fire contractors at the site that made the situation unsafe. The Cal Fire employee “did not seem to have any issue with loggers continuing to cut while activists were in the forest,” said one activist called Alder. “I mean I don’t know any other way to describe it other than negligence.” They see halting logging in the forest as an ecological necessity. “There’s many issues here … these second-growth redwoods that are the best carbon sequestrators on the planet,” said George, the other activist. “They’re the money trees that they’re going after. Casper 500, that has the most money, we’re really trying to protect that.”

Alder said he thinks Cal Fire is allowing timber operators to get away with a huge land grab ahead of the implementation of the state’s 30×30 executive order, which is expected to conserve 30% of the state’s land and water resources by 2030. But Conway dismissed that assertion. Jackson State is the largest of the state’s 10 demonstration forests at almost 50,000 acres. Demonstration forests are expected to be used for research, recreation and demonstration of forest management practices.  “It allows us to showcase the forest practice rules for the public,” Conway said, “and it allows a place for the board of forestry and Cal Fire to see the effectiveness of the forest practice rules that are in place and how they balance the public’s demand for forest products, recreation, wildlife, water, carbon, you know, all the demands that the public places on the forest.”

Conway said that the Soda Gulch harvest aligns with the mission of the forest as laid out in the forest management plan. “We are directed to create a wide variety of stand conditions across the forest and those are laid out in what we call our landscape allocation,” Conway said. “This was probably one of the most contentious portions of the original creation of the management plan back in 2008 and it shows for every acre of the forest, what is our objective there.”

That allocation includes old growth stands that will be maintained as reserves, areas marked for accelerated old growth development, areas where trees will be managed to be different ages, and areas where trees will be managed on longer rotations. Large trees would be a bigger component of those last areas, but those trees would still be in the queue to be chopped down and harvested at some point. That’s how Cal Fire is managing the area where the activists were last week. The plan is to remove some trees in Soda Gulch to allow other trees to have the space to grow bigger.

“This specific plan is 330 acres of selection harvest,” Conway said. “That’s where we’re marking individual trees, and we’re controlling the density of the trees in there. So when we’re removing a tree that’s providing the sunlight, nutrients, water, soil — all the site conditions that our trees need to grow up and grow healthy.”

Conway acknowledges that’s clearly not how everyone wants to see the forest managed, but that there is a public process that’s a more appropriate avenue to air these concerns. But activists like George say getting public input incorporated into how the forest is managed is practically impossible. “I think three of the THPs were approved during the inception of the incipient COVID time,” he said. “People didn’t know. It was rather devilish the way this was put through and so we didn’t know until Trail Stewards got wind of it last spring.”

They say things had been quiet up until about a week ago when there were rumblings that logging activity was starting back up. “They come out here fast,” Alder said. “They had less than a week on this THP and they’ve got this whole swath and they’ve completely massacred another 50 acres. It’s insane how fast they work.” Alder says the public input process that’s in place now is meant to give the illusion of public participation without actually letting the public participate. For instance, a notice about the Casper 500 timber harvest plan was posted in the Casper area when everyone was stuck inside because of the COVID-19 shutdown. And even though it was also posted on the website, he asked, “Are we as the public supposed to continuously monitor the website and wait for them to put out ridiculous THPs?”

You can read our previous coverage of the Jackson State Forest activities here.