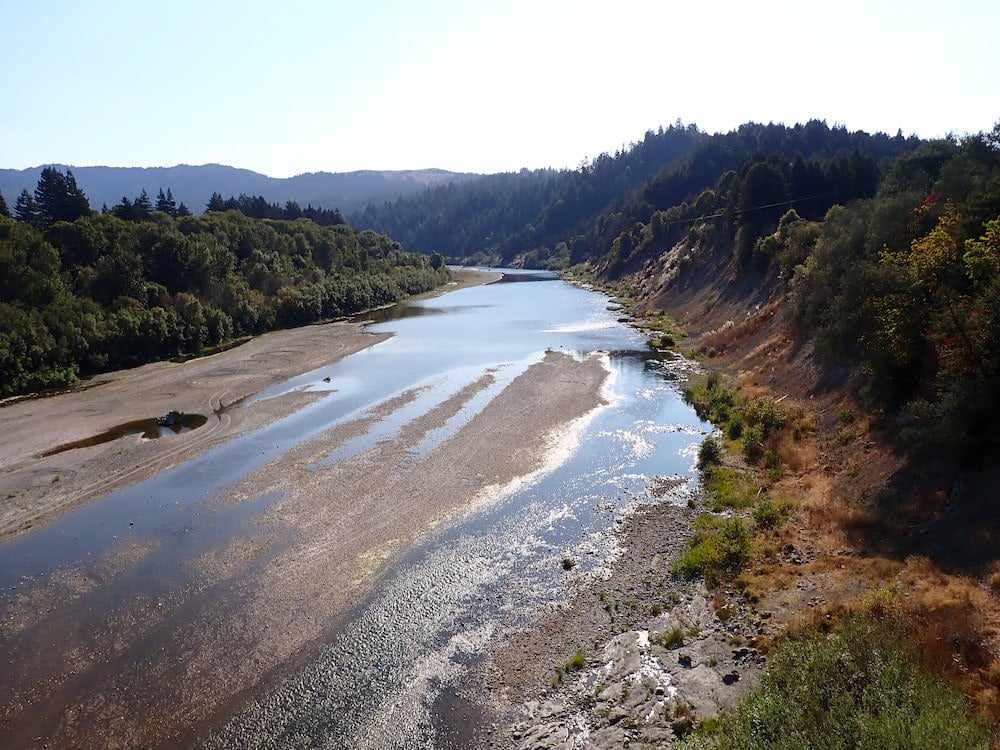 MENDOCINO Co., 9/21/21 — The Eel River Recover Project (ERRP), a non-profit organization which facilitates citizen monitoring projects in the Eel River watershed, reported historic lows in the South Fork of the Eel River last Friday, determining that the river bed was effectively dry at Dyerville and disconnected from the main Eel River.

“Drought conditions in the Eel River basin are not uniform, and the drought is more serious in the south in the Mendocino and Lake County portions of the watershed,” a statement from the group notes, and current disparities in river flow throughout the watershed may in part be attributed to a reduction in fuels due to the August Complex in 2021, leading to increased flows in the Middle Fork and North Fork Eel River.

The United States Geologic Service provides ongoing stream flow monitoring data here, and more about the ERRP can be found on their website.

Here’s the announcement from the ERRP:

The current record two-year drought is causing record low Eel River flows, according to U.S. Geologic Survey flow gauges, but on Friday, September 17, the Eel River Recovery Project discovered a condition in the field that would not be revealed by flow gauges.  The South Fork Eel River was not connected to the main Eel River, and in fact the bed was mostly dry below Highway 101 at Dyerville, which is an unprecedented condition.

An examination of USGS flow gauge results for all Eel River stations on September 17 indicated that the main Eel River flow at Scotia was 26.3 cubic feet per second (cfs), while the historic low for this location was 16 cfs in 1924.  The latter year ushered in a 25 year-long drought that precipitated the Dust Bowl, but no other gauge in the Eel River watershed goes back to that date.  The Van Duzen River, a large tributary that converges with the main Eel near Fortuna, was at record low with a flow of 2.54 cfs at Bridgeville.  The previous low of 2.65 cfs was on the same date in 2014, also the second year of a major drought.

The main Eel River at Ft Seward tells a different story, where the historic low of 7.4 cfs came in 2002, and the present flow level is 15.4 cfs.  Interestingly, the Middle Fork Eel River flow at Dos Rios of 7.4 cfs is more than four times the all time low of 1.64 set in 2014.  Why would there be so much flow in 2021 when the rainfall years were similar or worse.  The answer is the August Fire, where flows were depleted in 2014 because the over-stocked forest of the watershed was causing a decrease in baseflow, as well as creating huge fuel loads that fed the fire.  The reduction in trees and evapotranspiration have increased flow in the Middle Fork and North Fork Eel River, and help feed flows at Ft Seward.

On the South Fork, the headwater tributary Elder Creek is an old-growth watershed with well-studied hydrology.  On September 17, Elder Creek flow was 0.5 cfs and the record for the date is 0.40 set in 2007.  From there downstream, it is all record lows.  At Leggett, the flow was 6.98 cfs, less than the previous historic low of 8.86 cfs in 2002.  The flow of the South Fork at Miranda of 7.07 cfs was also a record, and barely more than at Leggett, while the previous low of 12.1 cfs was in 2008.  Historically, the South Fork Eel River was geologists call a gaining stream, but altered watershed hydrology combined with severe drought is causing flow to diminish in a downstream direction, this year causing it to be dry at the mouth.

Bull Creek feeds the lower South Fork Eel just above Dyerville and the USGS gauge indicates that it is currently at a record low flow of 0.03 cfs, which is barely flowing at riffle crests.  The previous low flow was 0.10 cfs in 2014.  The Bull Creek watershed was half clear-cut in the 1950s and 1960s before it was acquired as part of Humboldt Redwoods State Park.  A long-term flow study of the Eel River by Eli Asarian for Friends of Eel River found that the flow of Bull Creek had decreased 50% from 1950 to 2015.  Forty to 60-year-old overstocked forests in the watershed are transpiring water back to the atmosphere and depleting baseflows.  This is a pervasive condition across the watershed where ever clear-cut logging took place.

Drought conditions in the Eel River basin are not uniform, and the drought is more serious in the south in the Mendocino and Lake County portions of the watershed.  A large stationary high has recurred over the last two years, pushing the jet-stream north, and storms that would otherwise hit the North Coast, are going towards Canada.  This deflection results in more robust rainfall in the Fortuna area and the Van Duzen River sub-basin, but far less in southerly interior basin watersheds. Lower flows there have biological implications because they keep salmon from reaching optimal spawning grounds in headwater tributaries.

The Eel River Recovery Project is non-profit organization that assists citizen monitoring throughout the watershed. We also assist communities with water conservation and restoring forest and grassland health in order to improve base-flows and biodiversity, to reduce the risk of catastrophic fire, and to create jobs in restoration.  See www.eelriverrecovery.org for more information.  Call ERRP Managing Director Pat Higgins, if you have questions or want to participate in citizen monitoring at 707 223-7200.