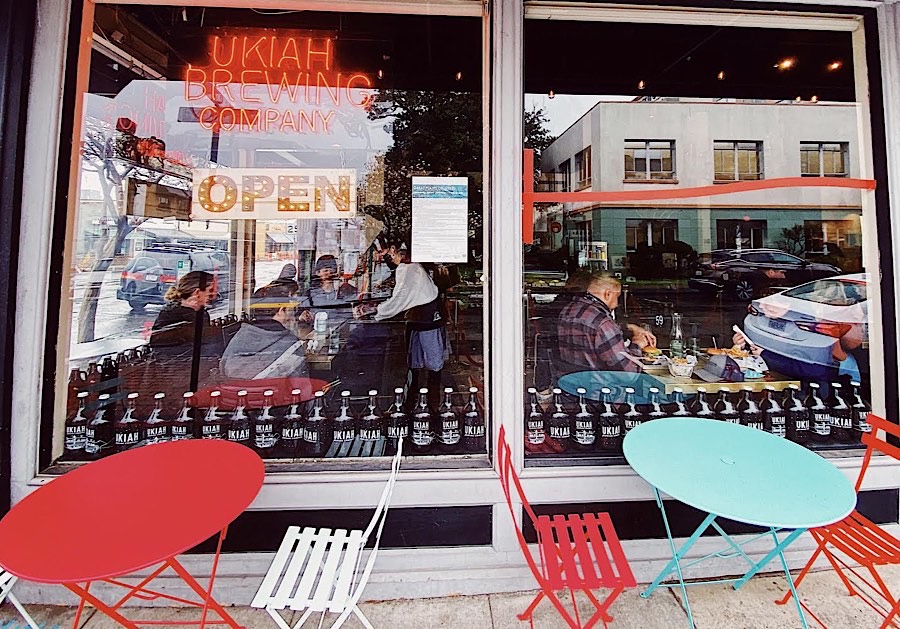 People once more eat indoors are resturants in Ukiah, after Mendocino County was moved to the red tier of COVID restrictions. (Josh "Jethro" Bowers / The Mendocino Voice)

California’s grand reopening day is almost here, but it comes with a few asterisks.

If all goes as expected and promised, on June 15 our 15-month-long ordeal of public health restrictions, mandates, bans and color-coded tiers to stem the COVID-19 pandemicwill finally come to an end. As Gov. Gavin Newsom said in April and reaffirmed in May, next Tuesday is when “we can start to open up…business as usual.”

But as that much-touted date approaches, the governor’s promise of a sudden milestone is colliding with the loophole-ridden gradualism of California labor law, local control and the imperatives of fighting a diminishing — but not defeated — virus that has killed 62,500 Californians and counting.

Some mixed messages along the way have added to the confusion. So what will — and won’t — actually happen on Tuesday? Many of your questions, answered.

Will I be able to sit inside a bar, work out at a gym or go to the movies?

The average Californian can expect things to look fairly back-to-normal in most of the ways that matter.

Moving “beyond the blueprint,” to use the state’s branding, and instead using federal health guidance for public places means that most businesses can dispense with social distancing requirements, capacity limits and forced closures.

But there’s a difference between “can” and “must.”

Counties will still be free to impose their own public health restrictions if they choose to — but only if they’re stricter than what the state is requiring. So far, no counties have said that they’ll part ways with the state’s rules, though a few, like San Francisco, say they’re still mulling over their options.

Even so, businesses aren’t taking any chances. On Tuesday, more than 35 business groups sent a letter to county governments across the state begging them to stick to the statewide rules.

Though business groups, who don’t relish the idea of getting sued, are hoping for consistent, cheap and easy-to-follow standards, your favorite restaurant, movie theater or hair salon is also free to impose its own public health restrictions.

That means you shouldn’t be surprised if you still spot a few “No Mask, No Service” signs after June 15.

Can I go to a concert?

Depends. Are we talking open mic at the local bar or Beyonce at an arena?

The state has said it will impose additional restrictions on “mega events.” That’s defined as anything that draws more than 5,000 people indoors or 10,000 outside. (Sorry, nameless dude playing a melodica into a loop pedal, you are not a mega event).

According to the most recent state guidance, concerts, conventions and other indoor mega events will only be open to people who can prove that they’ve either been vaccinated (by showing a vaccination card, a photo of the card, or documentation from a doctor) or that they tested negative for the coronavirus in the last 72 hours. That kind of proof won’t necessarily be required at outdoor events such as baseball games, but the state is recommending that stadiums either impose such a rule or require masking.

Once I’m inside the bar, gym or movie theater, can I finally take this mask off?

California’s public health officials confirmed Wednesday that along with relaxed social distancing, the state will also drop its mask mandate on June 15 and instead adopt the recommendations of the federal Centers for Disease Control and Prevention.

That means vaccinated adults should feel free to go mask-less in most public spaces. There are still exceptions for venues where the potential for many vulnerable people congregating in a confined place is high: hospitals and other health care settings, school classrooms, prisons and jails, public transit and nursing homes.

If you’re unvaccinated, you’ll still be required to wear a mask indoors in most public places, though it’s not entirely clear if or how that will be enforced. On Wednesday, health and human services secretary Mark Ghaly said that businesses can require masks of all customers, implement a vaccination verification system or simply go with the honor system.

“We are not requiring businesses to, for example, have somebody at the door checking for vaccine status as a way to comply with this,” he said.

What about when I’m at work?

For anyone who has a job, doesn’t work from home and spends their work hours with other human beings, this Q&A just got a lot more complicated.

Since last November, the state’s workplace safety regulator has been requiring most employees across the state to mask up and maintain six feet of distance from one another when possible. They’ve also required stores, restaurants and other employers to provide personal protective equipment to their staff, offer testing when necessary and, in some cases, set up pathogen-blocking furnishings such as plexiglass shields.

Those requirements seem to be on the way out, but not on June 15

Wednesday night,the state’s Occupational Safety and Health board agreed to take the new state public health mask guidance into account and vote on new workplace rules on June 17. If affirmed, they wouldn’t go into effect until June 28.

The board unanimously voted to revoke a vote last week to adopt new workplace rules that would let workers go maskless, but only so long as they and all their colleagues are vaccinated. Employers would also be required to provide N95 masks to staff.

That idea did not go over well with the state’s business interests. How, they asked, is an employer supposed to find out which workers are not vaccinated? What if vaccinated employees, chafing at their masks, begin harassing their unvaccinated colleagues? How expensive are all these masks going to be?

“We can’t be the mask police,” said Rachel Michelin, president of the California Retailers Association. “This totally contradicts the messaging that came out of the governor’s office, which was June 15, we’re opening up the economy.”

California’s business interests lobbied the governor directly, asking him to do an end run around the state’s workplace safety regulators and issue an executive order to “align” workplace guidelines with guidance from the state public health department and federal CDC. They renewed that request after the Cal/OSHA decision Wednesday night, urging Newsom to provide all employers with “consistency and certainty.”

Newsom declined on Friday to say whether he would act on that request. On Wednesday, Ghaly said the administration was “in no way predisposing or pushing for one outcome over the other” but for now was simply leaving it up to the workplace safety board.

Presumably state agencies will be abiding by the state public health guidelines?

You might think that. And that might very well be the case. But no one seems to know just yet, including the agencies, themselves.

Take the Department of Motor Vehicles. Californians participating in that most pedestrian of pre-pandemic activities — waiting in line at the DMV — may or may not be required to wear a mask, stay six feet apart from one another or have their temperatures checked before entry.

Those public health measures are in place now. Will they be relaxed come June 15?

State agencies are still waiting to find out.

“I’m in the same boat that the general public is in,” said DMV director Steve Gordon, whose agency is in the process of moving license renewals and other common customer service requests online.

A spokesperson for the governor’s office directed a question about state agency opening procedures to the California Department of Human Resources, wherea spokesperson for CalHR did not respond to either emails or voice messages.

Is the state still going to be in a state of emergency?

Does that mean the state isn’t actually going to reopen?

When the governor was asked on Friday whether, come June 15, he would also rescind the state of emergency proclamation that he issued in the early days of the pandemicin March 2020, Newsom — to the surprise of many and dismay of some — said that he would not.

So how can the state possibly reopen for “business as usual” when it’s simultaneously under an emergency?

The answer might be that the definition of “state of emergency” under California law doesn’t necessarily mean “emergency” in the everyday “something is on fire” sense of the word.

While the California Emergency Services Act does give the governor exceptionally broad powers to govern by fiat during a period of crisis, in practice the governor has evoked that power during the pandemic to administer various public health and economic relief programs and to collect federal aid.

“Abruptly terminating the emergency would cancel all that wholesale,” said Brandon Stracener, research fellow at the California Constitution Center at UC Berkeley. “A gradual transition process that involves the Legislature is far better, and permits a rapid response to any unexpected surge in the pandemic.”

With executive orders empowered by the proclamation, Newsom has loosened regulations to allow more people to administer vaccines, banned water shut-offs on homes with delinquent utility bills, given cities the ability to freeze commercial evictions, allowed local governments and courts to conduct public hearings over Zoom and given businesses on state roads the freedom to set up parklets and other street-side services.

The governor is hoping to extend some of the programs long past June 15 — either as long as the effects of the pandemic coursing through the state, or until the Legislature can make it permanent by statute.

On June 2, for example, the governor’s office assured local governments that they would still be allowed to hold meetings remotely. “The Governor recognizes,” cabinet secretary Ana Matosantos wrote in an open letter, “the importance of an orderly return to the ordinary conduct of public meetings of state and local agencies and boards.”

Republicans in the Legislature have long bristled at the governor’s unprecedented use of executive power during the pandemic, and are now attacking him leading up to an all-but-certain recall election this fall. On Monday, Assemblymembers Kevin Kiley of Rocklin and James Gallagher of Yuba City and state Sen. Melissa Melendez from Riverside County demanded that the administration explain what justified the continued proclamation of the emergency.

Some emergencies from recent wildfires and past droughts are still active, Newsom’s office notes.State law does give the Legislature the ultimate check on the governor’s emergency powers. All they need to do is pass a resolution declaring the emergency to be over. But they haven’t. And with Democrats enjoying supermajorities in both the Assembly and Senate, they aren’t likely to anytime soon.

This article was originally published by CalMatters.

5 thoughts on “What changes when California “reopens” June 15 (CalMatters)”