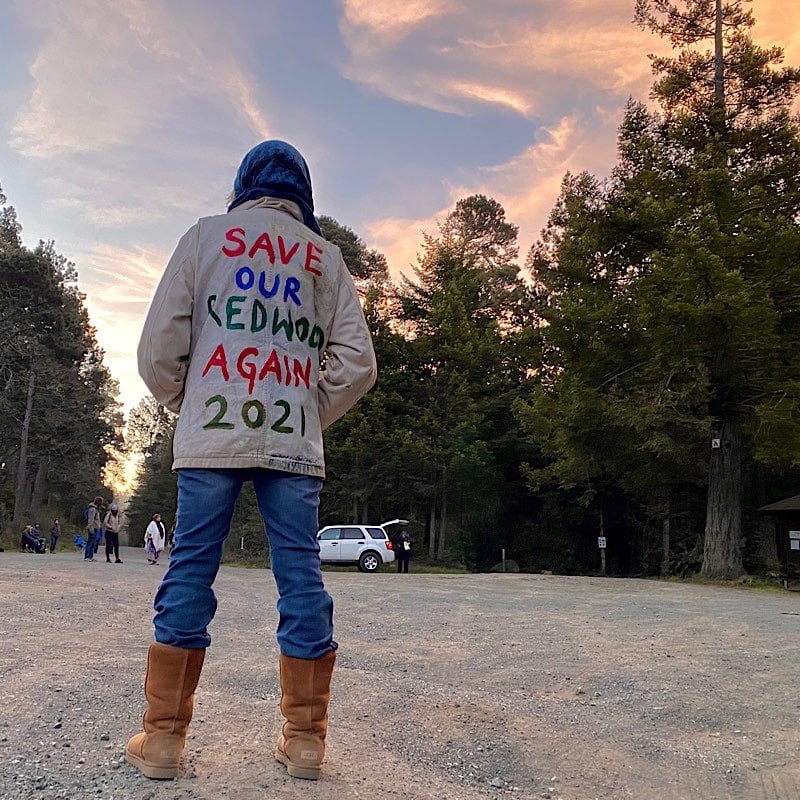 WILLITS, 6/22/21 — Cal Fire announced today in a press release that they have ceased logging in the “Caspar 500,” a section of Jackson Demonstration State Forest near Caspar on the Mendocino Coast, which was slated for a timber harvest. Indeed logging had begun in the area only to be repeatedly interrupted by the efforts of activists from an array of groups, urging Cal Fire reconsider how it is logging the areas of older second growth redwood forest. (For a longer discussion on the issues behind these protests and the different sides see our previous coverage)

The coalition of groups, which includes the Coyote Valley Band of Pomo Indians, EarthFirst! and the Mendocino Trail Stewards, are asking for a two year moratorium on logging in the forest, and more broadly, a reconsidering of the role of this forest in an era of climate change.

A second logging operation was halted in another section of the forest this morning. Near an area called “Camp One,” protesters staged another direct action. While Andersen Logging was charged with falling trees in the Caspar 500, near Camp One, logging operations were being conducted by Two Brothers Logging and Excavating.

The active site was near the area of the forest titled “Camp One.” Camp One is located in the Red Tail THP, East of Fort Bragg CA along CA Highway 20. The purpose of the additional action was to demonstrate to the public that the issues surrounding commercial timber harvesting in the State forest go beyond any single logging plan. These include the need to preserve dwindling stands of publicly-owned second growth redwoods for environmental services such as carbon sequestration, water conservation and fire resilience necessary to combat climate change.

A press release from activists quoted Linda Perkins as saying, “No one is being responsible for public safety. I am appalled at the lack of responsibility shown by CalFire, CHP and the Mendocino County Sheriff.”

Cal Fire is calling for new community meetings to discuss the issue, while protesters vow to continue their actions until all logging has been halted,” according to their press release.

The Caspar 500 Timber Harvest is an Experimental Watershed and is the oldest experimental watershed in the western united states, dating back to 1962. It has almost 60 years of data detailing a wide array of measurements to relate forest practices to watershed processes and downstream conditions.

Details for Community Meetings will come in future news releases, as well as, on the CAL FIRE MEU social media:
Twitter: https://twitter.com/CALFIRE_MEU ,