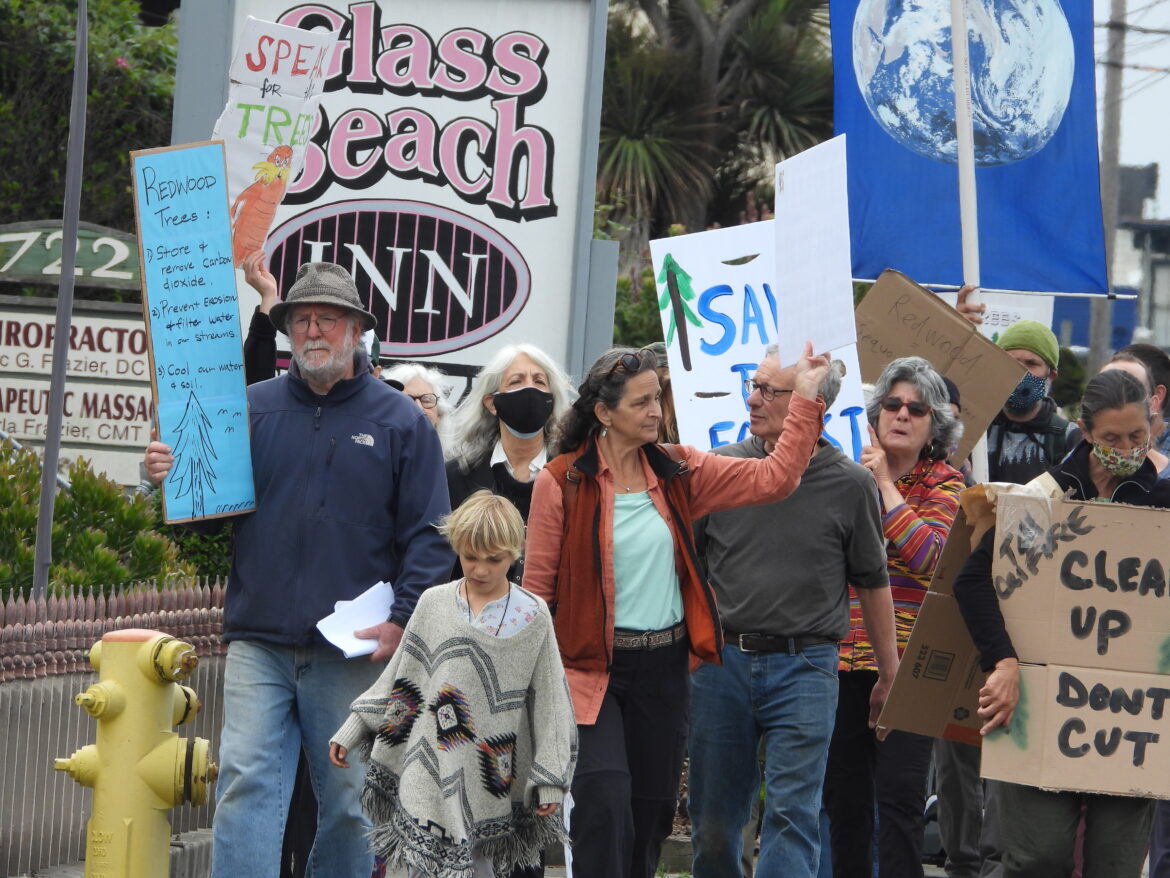 FORT BRAGG, 6/29/21 — Tim McClure, 66, and Amari Fishman, 11, both of Fort Bragg showed up to march against the logging of Jackson Demonstration State Forest on Monday. They were part of a group of more than 60 people who walked from Oak Street through downtown Fort Bragg to the closed Cal Fire Station on the northern end of town.

The crowd walked amid melodic chants led by the booming low voice of veteran activist, Anna Marie Stenberg: “What do we want? A forest preserve! When do we want it? Now!” or “Hey, Hey, Ho, Ho, now it’s time to listen to the Pomo.”

McClure, a carpenter, is distressed at the decline in quality of wood as well as what is happening in the forest. Both show a declining planet with overused resources, he said.

“We’re in crisis mode here on planet Earth. The more of these redwood trees we cut down the weaker we become and the lesser our chances of survival on this planet are. I have kids, and I want them to have a future. And I want them to be able to walk in the same forests I have walked in as a native Californian for the last 65 years,” McClure said.

Young Amari Fishman is impressed by the size and presence of redwood trees. The idea of cutting big redwood trees down makes no sense to her. She has been to several forest protests now and finds them inspirational.

“I have a passion for nature. I go for walks in Jackson State Forest and I’m getting a bike soon.” She carried a sign that said “Redwoods are a Keystone Species.” That means everything else depends on them. “They are only really in one place, which is here,” she said.

The march was led by activist Chris Skyhawk, who suffered a stroke that ended his run for the board of supervisors in 2018. He has since recovered, although he used a scooter to lead the charge north on Main Street. He stood in front of the crowd at the Cal Fire office and described how it has all given him a new perspective, while congratulating activists for their efforts and emphasizing the value of the forest to the community.

In front of the Cal Fire sign, a number of other people gave speeches, including Polly Girvin on behalf of the Coyote Valley Band of Pomo Indians. She gave an update on government to government consultations that are ongoing between Cal Fire and the tribe. She described the removal of Native artifacts and battles to retrieve them that have lasted for decades, ranging from a struggle with UC Berkeley over remains removed from Lake Mendocino when it was made to the recent confrontations with the likes of CalTrans and Cal Fire.

“In federal law Indian justice comes slowly,” Girvin said. The Sherwood Valley Band of Pomo Indians is also involved in negotiations over Jackson Demonstration State Forest. Activists celebrated victory for stopping cutting in the forest, describing early morning interventions that have been going on for weeks.

The rally was only one of three events that took place Monday related to the protests against the logging in Jackson Demonstration State Forest. Fired up activists have gathered at the crack of dawn to block any harvesting and have made every effort to block logging in the forests. The energy against cutting has been formidable. Protesters have succeeded in blocking the logging chiefly by going into the forest while cutting is going on, endangering themselves from falling trees.

This relatively new tactic has succeeded so far, although it’s particularly distressing to loggers. Before the crack of dawn, protesters gathered and once again blocked logging activities in the forest, attendees at the rally heard. Next came the march, then on Monday evening, Cal Fire held an informational event at the Woodlands Station 5 miles out Little Lake Road in Mendocino. (There will be a separate story on that event)