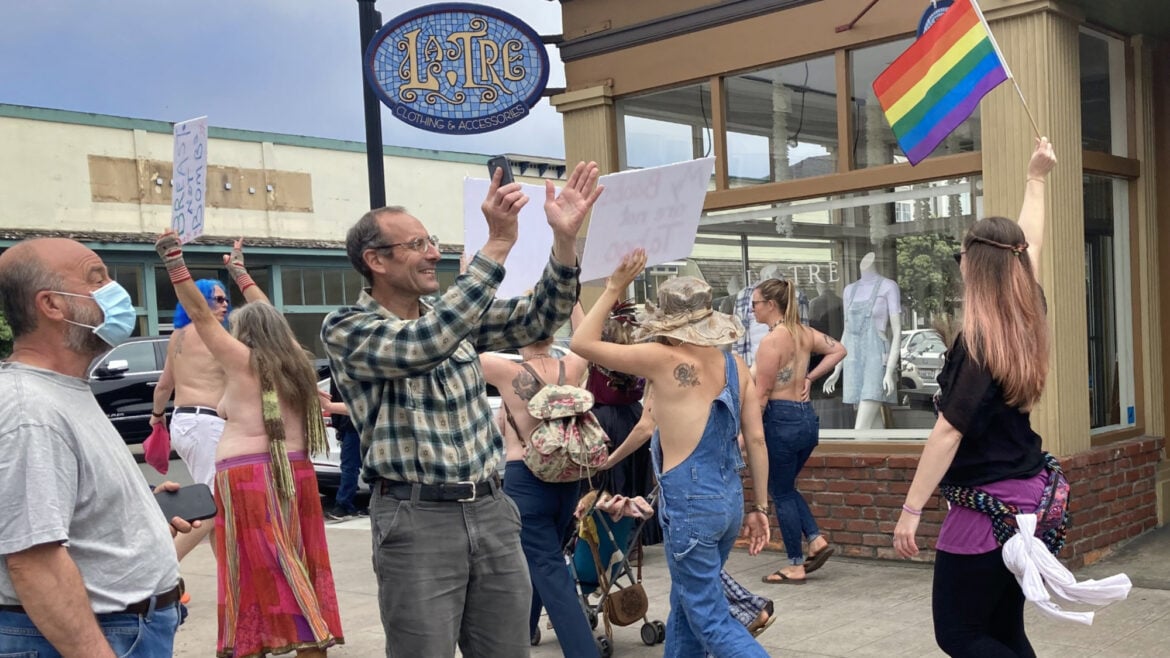 FORT BRAGG, 6/28/2021 — Going topless is a taboo that has not seemed to go away — for women at least. But societal norms are slowly changing, pushed along perhaps by a group of people who assembled in Fort Bragg on Saturday afternoon, at a rally to support the freedom to go topless.

The group of about 25 gathered in front of the Fort Bragg Town Hall on Main Street under a semi-cloudy sky. The majority were topless. Some adorned themselves with strands of colorful necklaces and costume jewelry. A few drew statements on their chests that declared their views including, “My boobs are legal.”

Protesters said the rally and march was for the freedom to march topless and in support of Marie Willa Bobo-Smith, 57 of Fort Bragg, who said she was encouraged by friends to organize the rally.

With some COVID restrictions and the weather warming up, more people are out and about getting exercise.

“I started out [last week] walking through town, walking for health reasons…walking topless,” said Bobo-Smith. She explained that she was getting bullied on Facebook for walking topless.

Willa Bobo-Smith said to the assembled marchers and onlookers, “Imagine: that as a transgender woman I am the living embodiment of a sexual double standard. Men can walk around top free and post photos of themselves on the internet and when a woman does it, she then becomes a slut, a whore and illegal. Why?”

The small crowd reacted with their own shouts of, “Freedom,” and “Breasts are not illegal.”

Destiny Laird of Albion, with feathers and beads in her hair, clad in a long flowing skirt and butterfly wings on her shoulders, was dressed to be festive. As a few others finished up their signs, and while listening to Bobo-Smith speak, Laird explained her motivations for joining the rally and march.

“[Marie] told me about the hateful things said about her on Facebook. Marie asked me and others to walk with her and a lot of women said, ‘We are afraid,’” said Laird.

“These women here today, saw on the Facebook group page ‘Fort Bragg is my roots’ the gymnophobic and the transphobic hatred directed at me,” said Bobo-Smith. Gymnophobia is defined as the fear of nudity and transphobia as having or showing a dislike of or prejudice against transsexual or transgender people.

Bobo-Smith said she was surprised that so many people showed up to the rally.

The group proceeded to march through Fort Bragg’s downtown which was busy with an influx of summer tourists. The marchers walked on the sidewalk waving and carrying signs that said, “I am with her,” “Equality has no gender,” and “You have boobs too!”

Several people joined the march for a bit along the way. Many bystanders clapped or shouted their approval. A male passenger in a car drove by and made known his disapproval by mimicking vomiting.

“This [rally] is a result of word of mouth in response to what was happening to Marie,” said Laird, “I am here in solidarity and for women’s rights — one of these rights is to be nude, nude breasts without being sexualized. It is not an invitation for assault.”

“Breasts are so highly sexualized,” said Alexis Thurber, who lives north of Fort Bragg. She added, “At one point in time it was not legal for men in this country to be topless and with push back it became normalized. We are trying to get rid of this limit for women.”

Though federal law does not generally regulate these kinds of things, the California penal code does include a statute against nudity in public — though what this means for women being topless is unclear. Indeed, several cases have been brought to the California courts regarding full nudity. In 1972 the California Supreme Court ruled, “That simple nudity is not lewd, and therefore does not constitute indecent exposure.”

Vicki Wellspring, of Fort Bragg who marched with the group said, “Part of why I am doing this is about giving an anti-capitalist message. Breasts are commodified. This restricts [women] from having them out and you know that you use them to sell…you can sell with the titties.”

“I wanted to come to support my friend Marie,” said Gowan Batist of Caspar. “I didn’t want to walk topless. I do want people to understand this is not illegal. And, that it is people’s personal idea of modesty — that they are free to have — [that] should be kept personal.”

The marchers, before dispersing, gathered to share what it felt like before and after the march and rally.

“Before I started the march, I felt that people would look down on us, but we had lots of thumbs up and cars honking,” said Bobo-Smith’s wife, Marge Bobo-Smith, “I am happy to see the community come out and support Marie and I did not expect to see so many people to show up.”

“I was semi-prepared for the need to defend my friends and instead we felt loving support,” said Laird.

Willa Bobo-Smith added, “I feel stronger and safe. There is a group on the Facebook site that did not like that we would be here. They were supposed to have a counter protest. And [that group] they are not here.”