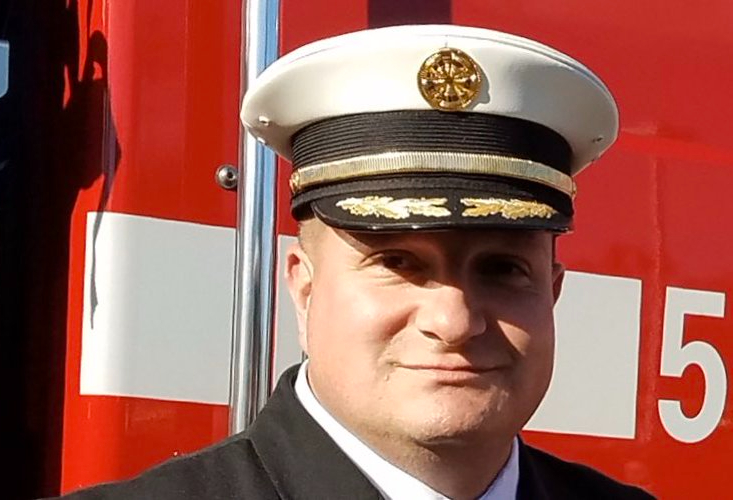 LITTLE RIVER, 5/12/21 — Two years of low rainfall have left Mendocino County, not to mention the entire state, dry as a bone. We wanted to understand what that will mean for fire severity and fire fighting capability, so we had a chat with Cal Fire Mendocino Unit Chief George Gonzalez, who has been working as a firefighter for 30 years and in the Mendocino Unit for over 10. Gonzalez said that with the drought, he’s anticipating a long, difficult fire season ahead.

For more follow this link all our drought Mendocino Voice reporting.

This interview has been edited for clarity and brevity:

TMV: Could you explain the relationship between drought and fire?

Gonzalez: Drought has a direct impact on fire on several levels. The drought that we’re experiencing now has significantly impacted us here locally, and statewide.

With the lack of moisture — no rain — all the trees that are used to getting 30 to 40 inches of rain here locally have gotten approximately half that, if not less. Normally, fire season would go forward and things would gradually start to dry into summer but that has already happened in the spring.

And we’ve already had large fires this spring here in Mendocino County. So the lack of moisture, the lack of water means all the vegetation — the trees, the brush, the grass, are very drought stricken, very thirsty for water because we did not have adequate water this winter

…lakes or ponds where we would normally get water, have gone dry already. So we’re going to need to see where we can get water that’s close and available for fire suppression because some of the local smaller types of ponds have dried and even some of our station wells have started to dry such as Covelo. We might have to start trucking in water just for our daily activities at the station level, which we’ve never done before.

TMV: If you’re already having these big fires in the spring, what do you anticipate we’ll have in the summer?

Gonzalez: Well, I’m hoping for the best but we’re prepared for the worst.

I anticipate a very large and long fire season; I think we’re going to have significant fires throughout California. And every square inch of Mendocino unfortunately, even all the way through the coast is very susceptible to fire already. So to answer your question, I believe we will see large fires this summer.

TMV: How are you preparing?

Gonzalez: Thanks to the governor’s budget, working with our department, we’ve had monies available to us earlier than normal. We’ve hired additional staff throughout the state and locally.

We also are about to receive a new helicopter. We should have it in service at the unit level here in Mendocino County, approximately by the first week of July. So with all these factors, with the additional firefighters, with additional staffing, with all the training that we’re doing now and all the preparation we’ve done over the past several years — vegetation management, firebreaks and controlled burns — this has given us every chance to prepare for the summer.

TMV: How many more firefighters exactly do you have?

TMV: What kind of toll is the dry weather and high fire risk taking on your staff?

The sheer volume of fires we’ve seen in the past five years has more than doubled. It is a tremendous workload but thankfully we’re able to get additional staffing to deal with some of these modern fires.

TMV: Is there a chance that Lake Mendocino could get too low for you to be able to scoop water up?

Gonzalez: At some point it can. We are now accustomed to being able to draft water from extremely low water levels. We can work under those conditions.

But at some point it may.

I understand from hydrologists that the water can get to a low level where it is a mixture of mud sediment mixed in with the water and it starts to turn into a sludge. I’m not a hydrologist so I don’t know if the water level will get to that point this year. But it does sound like that is a possibility.

TMV: Have you ever seen that before?

Gonzalez: We have not seen that before. But we’ve never had the Covelo station go dry before either. And right now, preliminary reports just in…we are starting to notice areas where we’ve gone to in the past for water that are almost dried up already — smaller, little tributaries, and small ponds

TMV: What happens when those ponds, rivers, or creeks that you usually get water from go dry?

Gonzalez: It adds another layer of complication to the firefighting plan, but it’s not something that’s going to halt any firefighting operations.

We’ve been training and preparing for this moment. We can order extra equipment, extra water tenders, extra air tankers, extra helicopters to a site because we understand that our normal water sites may be impacted. So the initial attack incident commander will be ordering additional resources as a preventative measure.

TMV: With things like the Covelo well going dry, how do you ensure you have enough water consistently available?

Gonzalez: So for Covelo we will have to purchase water and get it delivered. And then as far as firefighting, that is one of the one of the decisions that our firefighting ground personnel do when they respond to a fire incident — see the potential for the fire and request enough resources for the fire, including water tenders for the fire that they have on hand.

TMV: Do you think that response time will be slower because there might not be water available and you might have to wait for water tenders to arrive rather than using water on site?

Gonzalez: I think the response times will be the same, if not a little bit quicker. We’re sending more equipment to each dispatch.

We started that last year, we’ve increased our equipment responses to each dispatch. And we’re also going to add additional water tenders and things like that to our dispatches as needed when the incident commander feels that they need more water.

TMV: In the past few years, the vast majority of the Mendocino National Forest has burned. So is there a lower fire concern for the eastern part of the county or could there still be severe fires in that region?

Gonzalez: I have high concerns for all areas of Mendocino County. I have high concerns as well for the Mendocino National Forest, which encompasses several counties. The large fires that have occurred, because they’ve been high intensity fires on the Mendocino National Forest, have converted the vegetation type. Where there was timber or brush that burned, now there is a crop of annual grass. So I do anticipate large crops of grass in those areas. And grass can burn fairly frequently and is ignited very easily with any sort of lightning or people dragging a chain from their trailers, things like that.

TMV: Everyone talks about this being the new normal or the new abnormal. Based on your 30 years of experience, does it seem like things have radically changed in the past five, 10 years?

Gonzalez: They absolutely have…the fires from 2014, 2015 up to present time have gotten much larger.

The fire seasons are much longer.

When I first started in the Sonoma Unit, in the early ‘90s, fire season was maybe three and a half or four months. Now our seasonals are working nine or 10 months every single year and fires and that’s a direct response to the fire season.

So fire seasons have more than doubled in length…Our summers are longer and drier and our winters are shorter and drier. So the fuels don’t recover as they should during the winter so they’re drier.

TMV: What are you most concerned about for the upcoming season? What do you think the biggest challenges will be this year?

Last year, in a 24 hour period, lightning rolled through California and started over 1000 new fires. And that’s just something nobody’s prepared for. And then if you add wind to that, that complicates an already complicated scenario.

TMV: What are the top three messages that you want to pass on to readers about how to prepare for this fire season, how to stay safe, and what to be thinking about?

There’s plenty of information for home hardening and defensible spacing. And sign up for your local alert system, so you can know when there’s an evacuation process through the sheriff’s office.