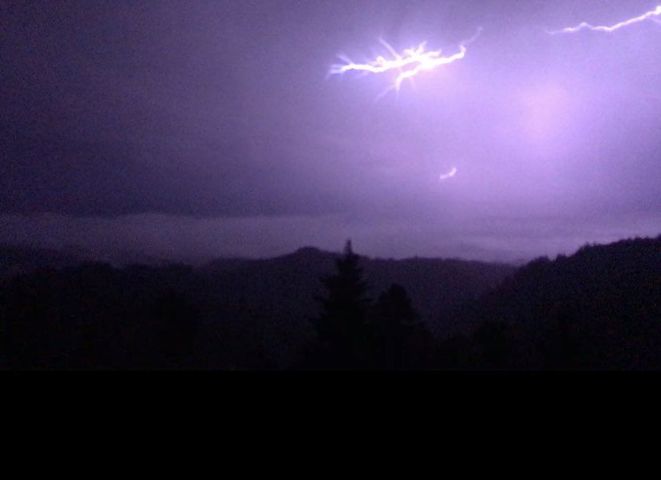 UPDATE 5:20 p.m. — Intense and drenching rain fell in and around Willits this afternoon, with a great many lightning strikes. The result has been a series of car wrecks on the freeways, and some possible lightning sparked spot fires. Firefighters and others are searching the area along Willits-Hearst Road, and also near Brooktrails, after reports of smoke. At least one small fire was started by lightning, but was quickly put out by the drenching rain.

There was a single car incident north of Willits in which car went off the 101, and another accident on the 20, but neither is blocking the road, and it does not appear that there were substantial injuries.

ORIGINAL
WILLITS, 5/15/21 — A small wildfire is burning north of Covelo, along Mina Rd., which was likely caused by lightning from the thunderstorms overnight. A firefighter at the Mendocino Cal Fire unit explained that though the fire is still under investigation, it was most likely started by the significant lightning event overnight.

As of about 1 p.m. the fire was at only one-eighth of an acre, burning in heavy timber, with a very slow rate of spread, and posing no danger.

The Cal Fire Copter 101, which is usually based out of the Howard Forest Station at the top of the Ridgewood Grade but is currently flying out of the Ukiah Airport, has made some drops on the fire, but has mostly been flying of north and inland Mendocino County in an effort to spot other possible lightning starts. By midday a hand-crew and an engine had arrived at the fire on Mina Road, and were working the blaze from the ground.

Reconnaissance flights of the copter and another air asset will likely continue, and will resume tomorrow morning. Thankfully, enough rain came down with the lightning to squelch any starts, but there may be smoldering timber, and as the ground dries up those could flare up into wildfires. As a result Cal Fire will continue to monitor the situation from the air today and tomorrow — do not be surprised to see air traffic.

The National Weather Service is expecting more lightning through the day: