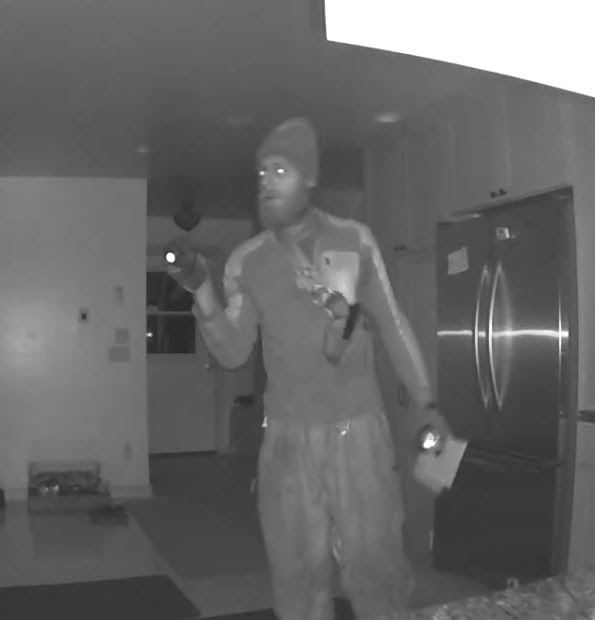 A still from the security camera, of a burglar who authorities are pursuing near Elk. (Courtesy MCSO)

MENDOCINO Co., 5/14/21 — A homeowner near Elk, who was away from home, spotted a burglar breaking into his house on a live security camera late Wednesday night. According to a press release from the Mendocino County Sheriff’s Office, the owner called 911 and deputies were dispatched to the home where they gave chase to the intruder, until he fire upon them. A short gunfight resulted, and the burglar got away. Soon thereafter, officers from several local law enforcement departments arrived to begin searching for the man, who remains at large.

Read the press release below:

Synopsis:
On 05-12-2021 at 9:34 PM the Mendocino County Sheriff’s Office received a report of a burglary occurring at a residence located in the 3000 block of Cameron Road in Elk, California.

The homeowner was away from the residence and noticed the presence of an unknown adult male inside the residence based upon live-time footage from a security camera (see attached black/white photographs).

The Sheriff’s Deputy returned fire and no one was injured as a result of the exchange of gunfire.

Several local law enforcement agencies responded to the “shots fired” radio call and assisted the Sheriff’s Office in a search of the area for several hours.

The search was unsuccessful in locating the adult male.

An active search in Elk is continuing on 05-13-2021, as it is believed the adult male is traveling by foot and is still considered to be armed and dangerous.

Sheriff’s Office investigators believe the adult male is the same person depicted in the color photograph (see attached) taken in early February 2021 in connection with several vandalism/burglaries of cabins in the area of Pine Ridge Road and Low Gap Road in Ukiah, California.

The adult male is also suspected of committing an eye-witnessed burglary of a residence in 4000 block of Cameron Road in Elk on 04-24-2021.

The adult male is believed to be white, approximately 5 feet 10 inches tall, weighing approximately 165-180 pounds and having a red beard.

Anyone who knows the identity or whereabouts of the person depicted in the photographs are urged to contact the Sheriff’s Office by calling 911 (emergency) or 707-463-4086 (non-emergency).

One thought on “Deputies involved in gunfight, no one injured — major search ensues”