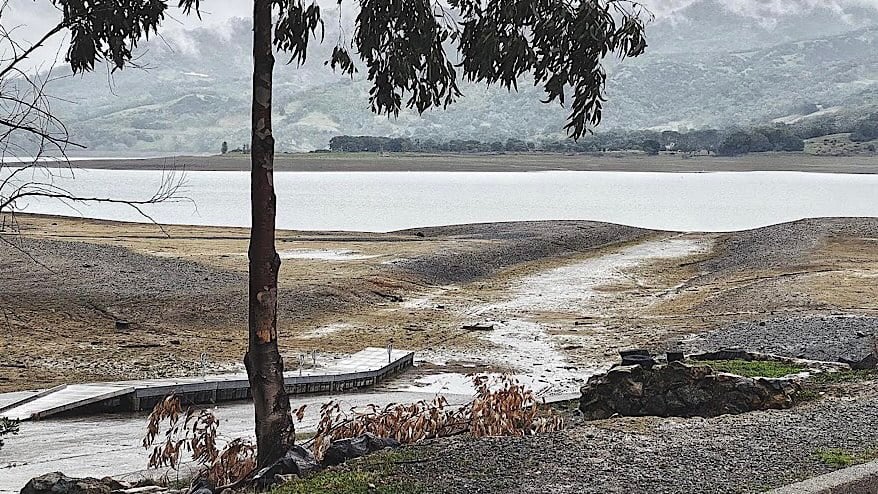 As of early spring, usually the moment when the Lake is at its highest point, the water is far from its normal shore. The forecast shows low likelihood of any substantial precipitation. (Josh "Jethro" Bowers / The Mendocino Voice)

LITTLE RIVER, 4/5/21 — Almost all of Mendocino County is experiencing moderate or severe drought, according to the National Oceanic and Atmospheric Administration (NOAA). Lakes Mendocino, Pillsbury, and Sonoma are all far below normal levels for this time of year. Combined, the three reservoirs are at about half of target capacity for early April. And although local water managers say there will be enough water for health and safety needs — bathing, flushing toilets, drinking — curtailments for other uses, such as agriculture, ranching, and landscaping, are on the horizon.

“I’m not sure if people realize how dependent our community is on Lake Mendocino and the Eel River and the Russian River. If they did, and they looked at the lake right now, it would clearly communicate our water supply is in big trouble,” said Beth Salomone, general manager of Russian River Flood Control, a regional water wholesaler.

The scene at Lake Mendocino, which supplies water to Ukiah, Healdsburg, Hopland, and Cloverdale, among other places is bleak. The reservoir is historically low and you can tell. Much of the basin is cracked and dry, with concentric rings that show where the water line sat in past years — years with more water — and the tree line and the edge of the water are separated by what looks like hundreds of yards of arid land. These days it looks less like a reservoir and more like a large mud puddle.

Lake Mendocino is currently at 45% of normal capacity for this time of year, with around 36,000 acre feet in storage. Lake Sonoma is in a slightly better situation, at 63% capacity with approximately 154,000 acre feet. And Lake Pillsbury has around 44,000 acre feet of water, and is close to 60% of average for early April.

As March closed with no miracle rainstorm, and precipitation for this April is forecasted to be less than awesome, a vicious drought is seeming ever more certain.

“This drought is going to impact everyone along the Russian River corridor or in Mendocino County,” said Salomone, urgency evident in her voice. “And some communities are more water secure than others, but we really are at the point where every single person needs to conserve. So every time we turn on the tap, thinking, How can I use less? How can I use it more than once?”

According to information from Sonoma Water, a water district that supplies water to Sonoma County cities and towns, the Russian River watershed has only received an average of 13.19 inches of rain this year, around 40% of average rainfall to date and the reservoir capacities are lower than they were during the 2013-2014 drought.

Last month, the California Water Resources Control Board mailed warning notices to around 40,000 water rights holders across the state, notifying them of water shortages and encouraging them to start conserving. In the letter, they cited below average snowpack, rainfall, reservoir, and groundwater levels. And according to reporting by the Press Democrat, state water regulators have issued letters notifying more than 700 vineyards, domestic suppliers, farmers and other entities with water rights for the Russian River that their diversions may be curtailed.

Despite the urgent  warnings of drought coming from all levels of government in California, Sonoma Water engineer Pam Jean said that water for basic health and safety needs will still be available in the Russian River watershed.

“We aren’t thinking that people are going to be in trouble as far as far as health and safety water goes, there’ll be water for people to use in our homes, to flush our toilets, washing dishes, etc.,” she said. “We, of course, ask them to be very efficient with all of that, but that water will be there.”

The water situation heading into this summer is obviously dire. And climate change is likely to cause continued weather extremes, meaning similar droughts, in years to come.

Climate variability is, of course, normal in California, but climate change is altering rainfall patterns and evaporating more water, more quickly. All of this means more extreme droughts and less water available to support human use and the environment. Water is a shared resource, used by humans, fish species and other wild animals.

“I believe that the future of water is going to be improved management of the available resource,” she said. “We need to find ways that we can store water when it’s abundant, and use it when our natural system is depleted, like this year. This year, we absolutely do not have enough water.”