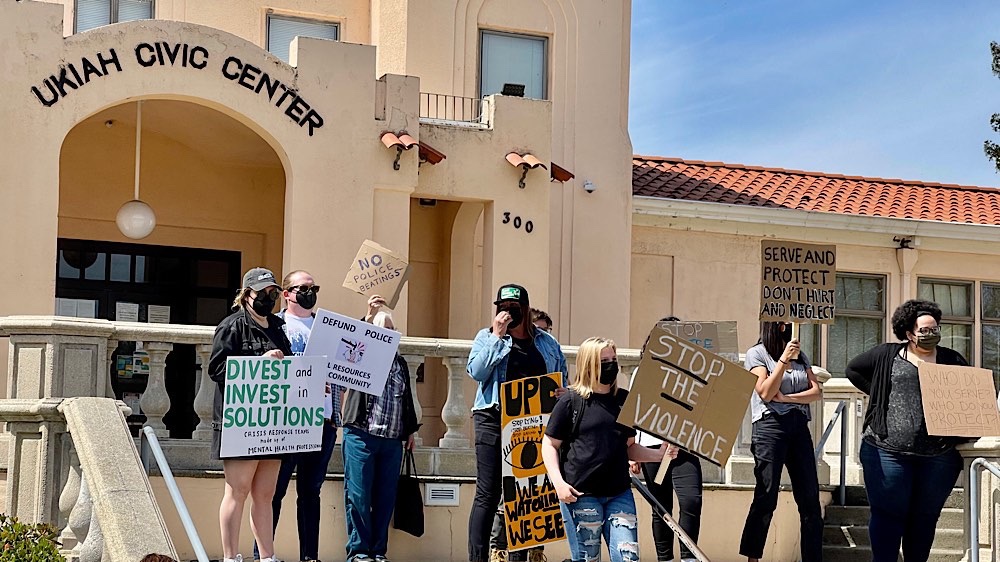 A small group of protesters gathered Saturday April 3 to protest the police beating of Gerardo Magdaleno by the UPD. (A.F. Baumann / The Mendocino Voice)

UPDATE 6:45 p.m. — The City of Ukiah released a statement which can be read below. Chief Wyatt, of the UPD, has still not responded to our calls, nor has the City or the UPD made public the names of the officers involved in the beating, nor have they said whether these officers remain on duty or are on leave. The Ukiah City Council’s calendar webpage has also been updated to include tomorrow’s special meeting, which will mostly be in closed session, but as of 6:41 p.m. not agenda had been included.

ORIGINAL
MENDOCINO Co., 4/5/21 — The family of Gerardo Magdaleno, the 25 year old Ukiah resident who has been diagnosed with severe mental illness and was beaten by Ukiah Police Department (UPD) officers last week, has retained Izaak Schwaiger, a Sonoma County based attorney specializing in civil rights cases, who has plans to file suit in federal court in the near future.

After the beating on Thursday afternoon, several videos of the incident were posted to social media by bystanders, showing in detail how multiple UPD officers punched and kicked Magdaleno while he was on the ground, as well as pepper spraying him and tasing him three times, at least once while he was already held down. In a statement made last Friday April 2, the Ukiah Police Department called the punches that the officer dealt to Magdaleno “distraction strikes,” a term which does not appear in the UPD manual or use-of-force policy. (See the videos here)

In a brief interview Sage Sangiacomo, city manager for the City of Ukiah, said that a special session of the Ukiah City Council has been scheduled for tomorrow, Tuesday, to discuss the matter. Most of that meeting will be conducted in closed session, due to the legal and personnel nature of the matter. The meeting will include a public comment period. (To email a comment write to [email protected]; “Include in the subject line which agenda item that you are submitting your correspondence for, and a brief 2-3 word description.”)

Asked the names of the officers involved, and whether they remain on duty or have been placed on leave, Sangiacomo said, “I can’t speak to the personnel matters.” He did say that the City of Ukiah would be holding an independent investigation into the beating, to be conducted by a third party not employed or affiliated with the City. Asked if it would be someone from the Mendocino County Sheriff’s Office of Mendocino County District Attorney he said that would be unlikely.

Sangiacomo said that the City would be publishing a longer statement on the matter this afternoon.

Magdaleno is a local man who has schizophrenia and other mental health issues, and family members say he is often homeless. According to his family he is well known to police, and had a similar run in some years ago, in which he was attacked by a police dog and received a substantial wound to his genitals. Last Thursday, April 1, at about 2:45 p.m., Magdaleno, who had been off his prescription meds for some time, stripped naked in south Ukiah in the vicinity of the well known Chavez Market. According to his sister, Luna Magdaleno, 30 of Ukiah, he had taken a dose of LSD earlier that day.

Recordings of police and emergency radio scanner traffic that day show that by about 2:50 p.m., dispatch was receiving several calls of a naked man chasing traffic, and UPD’s press logs show that at 2:54 p.m. Officer Saul Perez responded to the call — presumably Perez is the first officer visible in the videos, who accosts Magdaleno, pepper sprays him and tases him.

In an interview the family’s attorney, Izaak Schwaiger whose office is in Sebastopol, spoke at length about this situation and said that he plans to file a lawsuit in the United States District Court (which is based in San Francisco) against the City of Ukiah which is responsible for the UPD. Schwaiger said he is likely to pursue a civil rights lawsuit for excessive force, violation of Magdaleno’s Fourth Amendment rights, violations of the Americans with Disabilities Act and “likely some other claims along with that.”

As to the timing Schwaiger said, “This is an important case — it’s outrageous — so it’s not something that can wait,” and suggested the filing would be in the next week or so.

Elaborating on the beating, the attorney said, “At a very basic level it’s just outrageous. “It doesn’t take an advanced degree, or a lot of experience with civil rights to say that it didn’t need to happen.” He added, “And it’s representative of a larger problem that’s facing California and the nation, and that’s the criminalization of mental illness. We’ve got dollars for cops and pennies for mental health…and frankly, to the man with a hammer everything looks like a nail, so you give a guy a gun you give him hand-to-hand combat training…and what’s he going to do with that…they don’t have the training to deal with this because they’re too busy training these guys to be Rambo.”

In a statement published on Facebook, Francisco Magdaleno, Gerardo Magdaleno’s brother, said, “To those of you who have stood by us and are helping us push for change and reform of the police’s current behavior, THANK YOU! I cannot express my gratitude enough. I would love to state that I am proud of you. I am PROUD of you for using your 1st Amendment Right in a positive and courageous way. My family and I wholeheartedly thank you. You are a pioneer in our community, and you are part of the solution and change.” (Read the full statement below)

Speaking to the question of who is ultimately responsible for the beating, Schwaiger said, “Other than the fact that [those officers are] untrained assholes, they’re just jerks, they’re bullies with badges, and they don’t have training sufficient to do their jobs…But the lack of training is the city’s fault, that’s the chief’s fault.”

Ukiah, CA. April 5, 2021.  – On April 1, Ukiah Police responded to a call reporting that an individual was exhibiting erratic behavior in a public setting.  During the incident, a number of methods to subdue and restrain the individual were employed, prompting an investigation regarding the incident’s escalation and whether Ukiah Police principles and protocols were followed.

City Manager Sage Sangiacomo states, “We understand the community concern that has been expressed over the use-of-force by the police during the incident last week, and the City of Ukiah is taking this very seriously. We are launching a full and independent investigation into the incident to determine what happened and whether police actions were consistent with department training and policies. The City also intends to seek an independent review of the existing policies to determine whether they could be augmented or otherwise improved. We believe in the importance of oversight and accountability for our police department. Not only do they need the right policies, training, and tools, but they also need accountability if there are problems that arise. That is essential for keeping community trust in the officers who are on the front lines and responsible for keeping us safe.

“At the same time, we are receiving questions about the nature of police response when addiction or mental health issues are involved. We share the community’s concern that there are not more robust options for addressing these challenges. We are hopeful that the funding resulting from County Measure B can be used to help provide those resources. We look forward to collaborating with other stakeholders and concerned county residents to address this important issue.

“The City has been and will continue to push for better solutions in addressing the needs for mental illness.  But today, in this moment, the City is moving forward with next steps to ensure an independent investigation of the April 1st incident is completed in a timely manner.  We are committed to transparency, and will provide more information when it is available.”

I hope you are well. I want to take this time to thank you for your support towards my family and in specific my brother, Gerardo. I have read and responded to numerous people in comments, messages, and phone calls regarding Gerardo, both positive and negative.

To those of you who have stood by us and are helping us push for change and reform of the police’s current behavior, THANK YOU! I cannot express my gratitude enough. I would love to state that I am proud of you. I am PROUD of you for using your 1st Amendment Right in a positive and courageous way. My family and I wholeheartedly thank you. You are a pioneer in our community, and you are part of the solution and change.

For those expressing negative and facetious comments regarding my brother, please stop. I am sure that at some point, we all have made mistakes, including you (the finger-pointer). Judging, demeaning, wishing wrong, and degrading others do not make you a better person. In specific if you do not have facts or proof of what you are stating. My brother has gone through so much and has endured so much, and he’s only 25-years of age. Schizophrenia (substance-induced or not) and Bipolar disorder are not simple or curable diagnoses. I am asking you to please educate yourself in the matter and invite you to start a positive and constructive conversation with me or others. The only people who can promote change from ignorance is YOU. You are the only one responsible for personal development.

Lastly, my family and I are asking you, reading this, to share my brother’s story. Not only for my brother’s fate, but for your friend, mother, father, sibling, or even you. WE ALL deserve to be treated with dignity and respect, in specific by those who swore to serve and protect us.