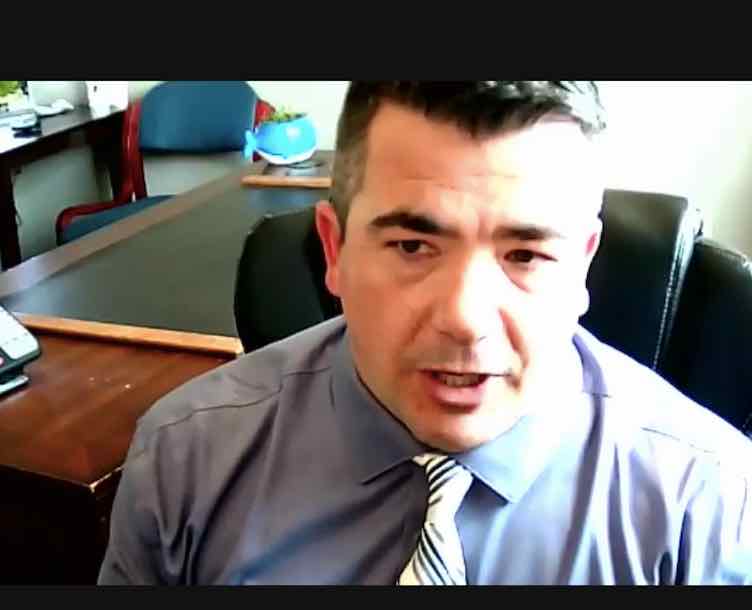 FORT BRAGG, 4/29/21 — From a new “Taser 7” that deters with a visual spark show, to a device that fires a giant rubber band that ties up a person police wish to detain, the Fort Bragg Police Department’s (FBPD) leaders described new tactics and tools for de-escalating violence at the city’s Public Safety Committee meeting held by Zoom on Wednesday afternoon.

They also responded to questions from Councilmember Lindy Peters about how the department would deal with situations similar to George Floyd’s murder at the hand of a police officer in Minnesota or the controversial April 1 beating of a mentally ill man in Ukiah, although they did not comment on those situations directly. Both top lawmen supported incorporating a mental health professional into the police department and creating a mental health response team to deal with mentally ill people.

“We get a lot of questions, especially with everything going on in the nation — and even locally — about what our department does de-escalation-wise and how we try to address that,” FBPD Capt. Thomas O’Neal said.

O’Neal and Police Chief John Naulty told the committee that critically important for de-escalation in Fort Bragg is lots of extra training and maintaining a culture to de-escalate whenever possible. Among the steps taken was a total ban on choke holds last year and a recent effort to circulate information identifying the danger of white nationalists, they said.

“Compared to our old taser, it allows us to do what’s called an arc display or smart display,” O’Neal said.

“I had a violent felon gang member, and the second he saw the spark display, he shut right down,” said O’Neal.

In July, the police department plans to implement another new tool called the “BolaWrap.” He showed the Public Safety Committee a one-minute video of the device, that when fired, looks like a giant rubber band with balls on each end that snakes around a person resisting arrest before the person knows what hit them. Surgical scissors are used to cut it off. The device won’t tighten around a person’s neck, according to online information from the manufacturer.

“We’ve also purchased what’s called a convex shield. This looks like a (typical) shield but it’s flexed outwards. We got that idea from the Sacramento Police Department from a supervisor training I went through. They use that, with training, to basically pin down subjects that may be violent,” O’Neal said.

The last item in the de-escalation weapons update was converting some shotguns to fire safer, less lethal ammunition.

“Those will probably rarely get used because they can cause some injury, but we want any tool we can provide out there to try to get out of seriously hurting somebody,” O’Neal said.

After the weapons presentation, O’Neal described the training regimen that is part of the Fort Bragg police culture.

“Our officers probably spend close to 15 to 20 percent of their time on additional training,” he said.

“The required trainings are actually really minimal, so we go well beyond that. The nice thing is I’m the training manager for our department so I have the ability to quickly adjust for internal needs when we issue them,” describing special training after a recent situation in which officers mishandled a call about a cat. He said officers will be doubling their required hours of continuing professional training, from 24 to 50 hours plus.

O’Neal and Naulty both said they don’t like to provide commentary on issues outside Fort Bragg. They seemed to include the Derek Chauvin verdict or the recent situation in Ukiah where a naked man was beaten.

“We get a lot of requests to provide comments on things that happened on the national stage. Chief Naulty and I are kind of in agreement that’s not really our role,” O’Neal said.

“I will speak with anybody for hours a day, about things our department can do better and things that happen in our community. What I don’t want to create is a police administration where we’re putting our opinions out there, of things that happen outside of our jurisdiction that we don’t have control over,” O’ Neal said.

Councilmember Peters asked O’Neal to comment on what Fort Bragg Police would do in a similar situation..

“One of the things that came to light with the George Floyd case was the knee on the neck. Just to clarify, that’s never been something that our department uses when arresting someone or hasn’t been for some time and that’s correct, right?” Peters asked.

“That is absolutely correct,” responded O’Neal

“I have not seen it during my career. We actually had a specific training with our people. We responded to that immediately to make sure everybody understood the dangers of placing a knee or putting any weight on an individual’s back,” said O’Neal.

Peters then brought up the recent incident in Ukiah.

“We’ve seen a lot of those videos, and again I just want to assure our community that, again, that’s not something our officers do,” said Peters, mentioning.

He said an equal danger is when officers become afraid to escalate when necessary.

“I will ask the public and the committee to please understand my biggest fear right now when we work on these de-escalation tactics, is that I have young officers that I have to make sure they are able to violently escalate when they need to to stop somebody from doing something. I’ve been in a lot of fights during my career. We really have to find that balance,” O’Neal said.

Peters said he had not seen any police brutality complaints come across his desk recently and is pleased with how the department has been emphasizing de-escalation.

“Under the circumstances and the microscope slide you guys are having to work on right now, we’re really pleased,” said Peters.

Norvell thanked the department for its “positive and proactive approach” and said he also did not like answering questions about national issues or incidents in other cities.

“I like to tell people to let our actions speak for us,” he said.

Naulty and O’Neal both supported getting a mental health crisis worker to work directly with police.

“I need people to work with me that don’t have guns, and have the right training to go out and deal with a mental health crisis,” O’Neal said.

“One guy was chasing cars and almost got hit. We had numerous calls of service on this person. And then we had another person over the weekend that a city official called in over by city hall,” Naulty said. He said that man was exhibiting bizarre and self threatening behavior. Police came out five times to deal with him.

“This s the kind of problem that really needs to be dealt with by a mental health professional,” he said.

O”Neal said he had been spit on by that disturbed young man.

“I need the resources to deal with issues like that that does not involve taking one of my crime fighters off the street,” O’Neal said.

O’Neal said the downtown community can help by pushing citizens’ arrests for repeat troublemakers. O’Neal described a situation in which he was injured in a confrontation with a homeless suspect in front of Town Hall several months ago.

“When I had stopped to talk to him, he’d been an ongoing issue in the downtown area. He had been complained about by multiple business owners, but no business owner had ever asked him to have him arrested for the crimes he committed, which made me the arresting officer. I’m not blaming that on them, I’m just trying to tell them the courts and the district attorney’s office are much more receptive when they see that there’s a victim involved. It’s so much more effective,” O’Neal said.