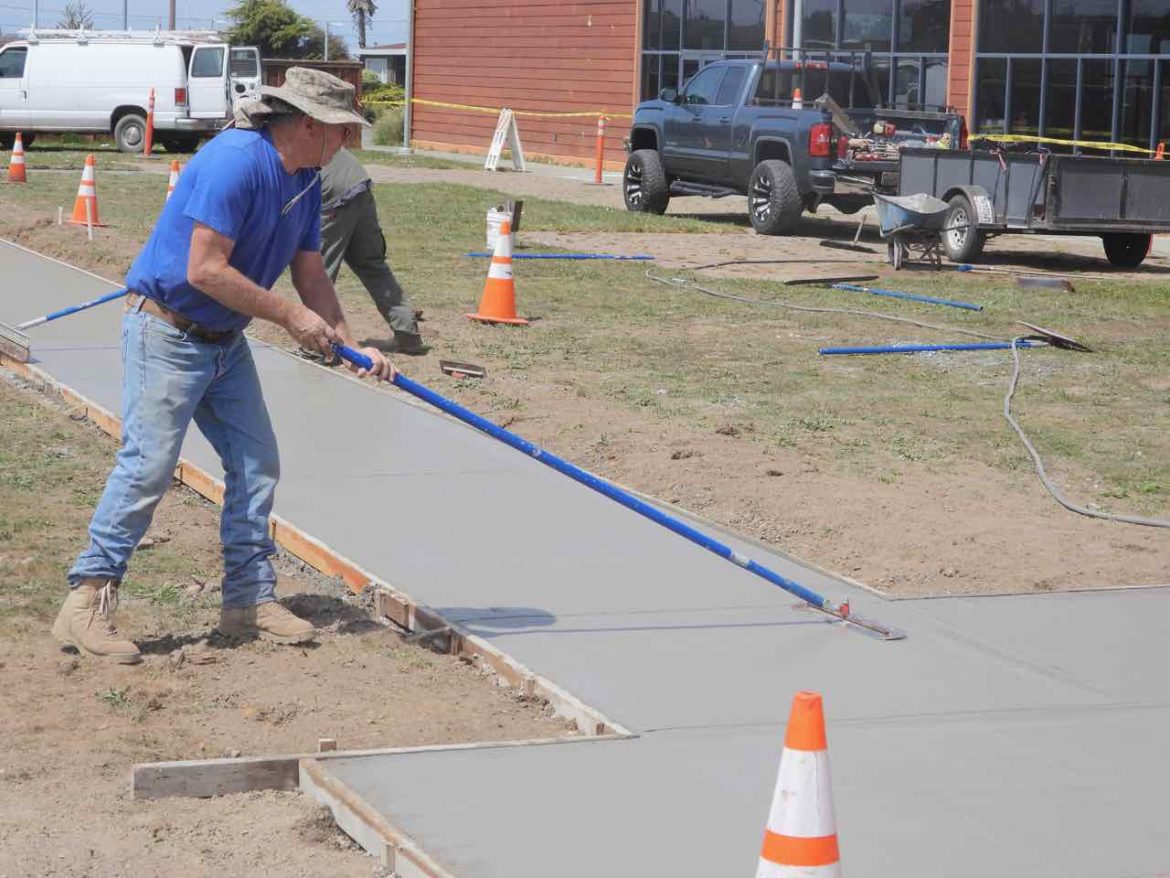 FORT BRAGG, 3/29/21 — Sign-ups are open for those who wish to sow their own 50 square foot plot of plants at Fort Bragg’s emerging community garden at the C.V. Starr Community Center. Gardening should start in early summer when the grounds are completed, but no official date has yet been set. The garden is coming to be after a two-year odyssey that started in 2019 with the blessing of the Fort Bragg City Council. Garden managers report the project is on track though they are faced with a 20–30 percent increase in the costs of construction materials. Fort Bragg Vice Mayor Jessica Morsell-Haye suggested at the April 26 council meeting that funding be increased to help cover the increased costs.

The Garden program is blooming just as the drought is worsening, which could threaten watering. Part of the Garden Friendly Community Fort Bragg (GFCFB) program is teaching people how to greatly reduce water use in raising food and developing composts that will enable the soil to hold up to eight times as much water, said Matt Drewno, president of the new nonprofit, GFCFB.

With a $10,000 anonymous gift, $7,000 from the Mendocino Coast Children’s Fund and lots of support from the City of Fort Bragg and the Mendocino Coast Recreation and Parks District, GFCFB is turning the southeast side of the C.V. Starr Community Center into a community garden. The garden, also adjacent to Fort Bragg Unified school grounds, will be used for educational purposes as well as being the source for local families to create good eating. A second Fort Bragg garden in South Noyo Harbor will be on the way when the first is completed and even more could be on the way after that. The City’s funding so far would extend to the current project, but GFCFB has energies and funding sources beyond that, Drewno said.

“We don’t want to get ahead of ourselves and start all these gardens and not be able to fill them. But there are some other really cool projects that might be a year or two down the road,” said Drewno. The Garden Friendly Communities program is designed to be expanded to other communities in the area and around the world if successful.

The small fenced-in space at C.V. Starr will be packed with food and garden fun, according to the maps and the gardeners at work setting it up. The garden will include about 30 beds of 50 square feet each with approximate 5×10 dimensions, with nearly half already signed up at $50 per year. Six more beds are fully accessible for disabled people. The city paid $5000 to have a paved roadway into the gardens that wheelchairs can use, a process which was underway throughout April and early may, with the construction process expected to complete in late May, with no opening day yet set for the gardens, but expected to be before C.V Starr itself reopens, now planned for late June. The city also is providing the water and land for free to the new garden. C.V. Starr will lend restrooms and much other support, while the gardens will provide a view to bathers in the swimming pool and water slide area. Before the garden went in, there were picnic tables with small barbecauses and mostly open space. In the garden, each person renting a parcel of land gets support from the group, access to a greenhouse, water from a city well, a shared toolshed and more. The fenced garden space will be open the same hours as C.V. Starr, which has been closed for the pandemic but which plans to reopen soon.

Two 3600 gallon tanks will be filled this month, before the continuing drought creates a problem for water use and long before dropping river levels create a supply problem.. As the drought of 2021 unfolds, city water may have to be restricted, city officials have told the Mendocino Voice. The garden uses a city well nearby.

The GFCFB group is too new as a non-profit to be able to take donations. They have been under the umbrella of the Noyo Food Forest and will be moving to the sponsorship of the Mendocino Coast Children’s Fund soon. The MCCF will sponsor them free of charge, as well as providing their large donation.

“When we heard about Garden Friendly City Fort Bragg, we knew we wanted to help get them off the ground. MCCF seeds worthwhile projects by providing funding and if requested, fiscal sponsorship, so that creative solutions can flower and grow,” said Annie Liner, executive director of MCCF.

“MCCF sees it as paying it forward because when we first started in 1992, a local non profit at that time, Good Neighbors, provided us fiscal sponsorship until we could get up and running,” she said.

Gardening is a great way to take climate change into one’s own hands, Liner said.

“We are great believers in community enterprise at the local level. Children need to feel empowered to deal with the challenges being presented by climate change and the environment. Gardening and growing food develops curiosity and competency. Our entire board are gardeners and we learned to love this activity from our parents and our grandparents. We are hopeful that the Garden Friendly movement will continue to grow up and down the coast and provide gardening spaces to families to enjoy this important activity with their children,” Liner said.

The City of Fort Bragg has been working to take a leadership role in gardens and bees.