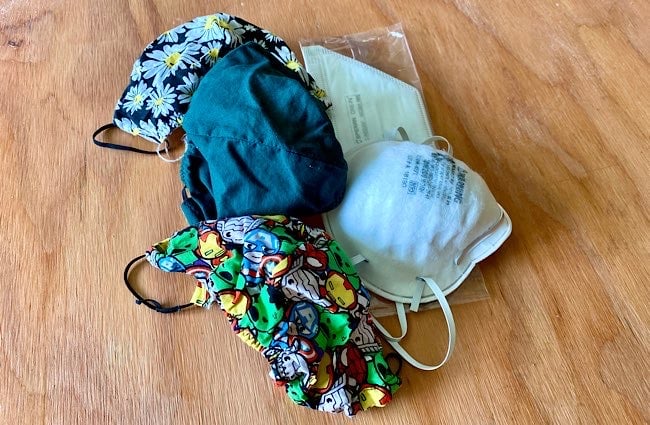 In 1918, the world experienced a pandemic caused by a particularly virulent strain of the influenza A virus.  Over the course of two years, it went around the world in four big waves, then faded.  By the end of the pandemic, it is estimated that 1/3 of the entire world population had been infected and that about 30 million people had died.  The virus, the H1N1 strain of influenza A, is still with us today and occasionally causes illness, but nothing like in 1918.  It was responsible for the Russian flu epidemic of 1977 and the Swine flu pandemic in 2009.

While influenza A is in a different family of viruses than SARS-2, the coronavirus that causes the disease COVID, there are enough similarities to make it useful to look at.  Both seem to have started in animals before jumping to humans.  Both are spread primarily by respiratory droplets and at about the same contagious rate (for each person infected between 2 to 3 more will catch it from that person on average).  Mask wearing is highly effective in preventing transmission in both.  During both pandemics, the virus underwent significant mutations leading to different strains.  The mortality rate of H1N1 is difficult to gage, however, it appears to have been similar to COVID ranging from 2% to 5% depending on the area.  The reaction of the public to health mandates was also similar, such as resistance to mask wearing.  Perhaps by examining what happened in 1918, we can get some understanding of what is happening now and make some tentative predictions on what the future will hold for COVID.

Despite being called the Spanish flu, because that was the first country to honestly report its cases, the pandemic appears to have begun in the United States. Genetic research suggests, however, that the story begins in October of 1872 in Ontario, Canada, where cases of equine influenza were first identified.  This influenza A virus, which infects horses, is very similar genetically to H1N1.  Within a month, the disease had spread into Northeastern US and over the next year across much of North America.  Reports in New York were that 95% of horses were ill.  While only about 1% died, the horses that survived were left unable to work for several weeks.  This had a huge economic and social impact as much agriculture at the time depended on horses.  General transportation of people and goods was also mostly horse drawn; including fire engines that brought water to fires.  The lack of healthy horses to pull “water pumpers” played a significant role in the Great Boston Fire of November, 9th, 1872.  After two years, the pandemic faded. Equine influenza is still with us today, largely held in check because of an effective vaccine against it.

In 1915, there were several cases of an unusually aggressive form of influenza in farmers in the Midwest.  World War I was in full swing and not much attention was paid to this, however, some researchers suggest that this was the beginning of the 1918 influenza outbreak. Michael Worobey is a professor of viral genetics at my alma mater, the University of Arizona.  He has spent much of his career studying the evolution of viruses and in particular H1N1.  Based on his analysis of the genes of equine influenza, avian influenza and human influenza H1N1, he believes that this virus jumped from horses to chickens and then to humans and that this likely took place on farms in the American Midwest.

The 1918 influenza pandemic is generally accepted to have started on March 4th, 1918, at US Army Camp Funston in Kansas.  A group of young Army recruits arrived for training on that day from Haskell County, Kansas.   Two months earlier, in January 1918, local physician Dr. Loring Miner had written to the US Public Health Service warning that he was seeing an unusually aggressive outbreak of influenza in Haskell County.  Within three days of the recruits’ arrival at the camp, over 500 men were hospitalized in the camp infirmary.

Camp Funston was an important staging camp for sending US troops to Europe to fight in WWI.  Fearing that the outbreak would lead to the loss of valuable troops, the decision was made to quickly ship as many healthy appearing men to England for further training.  They were sent by train to New York, where after a brief layover, boarded troop ships to cross the Atlantic.  The influenza outbreak spread along the train route they had taken and popped up as a fierce outbreak in New York.

During the two weeks it took for the transport ships to cross the Atlantic, many of the soldiers became seriously ill and several hundred died before reaching England.  Upon arriving in England, the men were only too happy to disembark and seek relaxation at the local establishments.  It wasn’t long before the new strain of influenza was gripping the island nation.  While most of the US troops were sent on to France to fight in the trenches, thus spreading the pandemic to the rest of Europe, a sizable group of the Camp Funston men were sent to various locations in the Mediterranean, including Turkey.  Thus, the pandemic was quickly spread to the African and Asian continents as well.

The world has seen many plagues since humans began to settle down from their nomadic roaming origins.  However, pandemics of the modern era starting with the 1918 Influenza Pandemic have all been aided by our ever more efficient means of transportation.  While, in 1918 it may have taken two weeks to get across the ocean from New York to London by steam ship, today it takes just a few hours by jet aircraft.  This is clearly a very important factor in the spread of infectious diseases today.

In part 2 of this three-part series, we will examine some of the public health responses that were taken, how effective they were or weren’t and, perhaps most interesting, the backlash against these measures by the public.  Part 3 will be a discussion of how the 1918 pandemic ended and a look to how this may foretell our future with COVID.