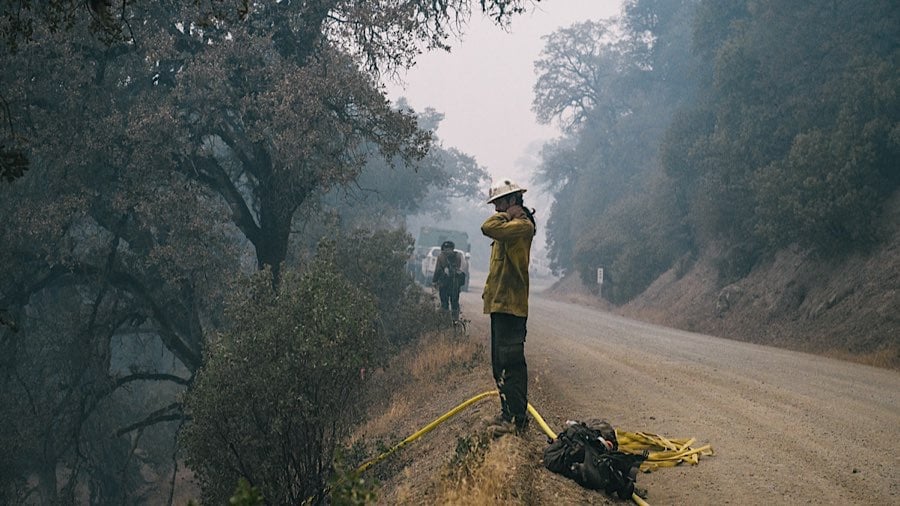 Javier Barraza of the U.S. Forest Service stands above a hose line monitoring backfires burning along the Mendocino Pass/F7 road. Barraza, who is based in Southern California, said he has been working on the August Complex fire since it was 500 acres. Now it is nearly 800,000. (photo by Alexandra Hootnick)

LITTLE RIVER, 4/2/21 — It’s now been almost a year since a fierce, late summer, lightning storm pummeled the state and sparked the August Complex. In less than a month, what started as 37 small fires in and around Mendocino National Forest grew into a staggering 1,032,648 acre inferno, becoming the largest fire in modern California history.

Now, at the same time as we speed towards the 2021 fire season, plans to clean up are underway.

Mendocino National Forest is preparing for August Fire cleanup and forest remediation, a process that will take years to complete. But one of the early phases in their forest remediation plan is salvage logging, or logging damaged trees.

The actual logging is still probably more than a year away. The Mendocino Forest needs to complete a report showing they are complying with federal environmental rules, such as protecting endangered species, and then wait for that to be approved by the Environmental Protection Agency. But planning is happening now.

Salvage logging is often contentious, as some parties believe that the forest would be better off if it was left to heal itself. Recognizing and noting this fact, the Mendocino Forest staff including scientists, foresters, and rangers held a virtual public meeting yesterday to discuss the forest’s land management plan in light of the August Complex, which included claims and studies about the importance of salvage logging.

Presenters covered a range of topics — climate change, fire severity, and endangered species, among other things. But the meeting seemed to be centered on getting across one message — that salvage logging is beneficial to the forest economically, ecologically, and for fire resiliency.

Fire research ecologist at the US Forest Service Pacific Northwest Research Station, Morris Johnson, opened up his presentation, which was towards the end of the meeting, by saying, “Usually after these large wildfires you can just go to your local newspaper or just look at your local news and you will see these types of headlines,” referring to a powerpoint slide with news headlines questioning the effectiveness of salvage logging.

These were a few of the headlines shown:

“After the fire, the salvage argument.”

“So really to generalize those headlines you can come up with basically two camps: the group or those who support active management or salvage logging or those who are against it,” said Johnson, who has been working with Mendocino National Forest since 2018.

Some environmental groups have already come out against the “Plaskett-Keller” salvage logging project in Mendocino National Forest, which is planned to take trees that the Forest finds have a 70% to 90% of falling within a 4,500 acre plot of land. The Plaskett-Keller project is within the Black Butte Wilderness area watershed and the Eel River Basin, 15 miles away from Covelo, and 36 miles from Willows.

“Let the Mendocino National Forest know that these burned stands deserve a chance to recover naturally and that logging them to make a quick buck for timber corporations is unacceptable,” wrote nonprofit Environmental Protection Information Center (EPIC) in a press release about the matter.

EPIC, in their press release, argues that the logging project should be limited to trees that pose an immediate danger near main roads and campgrounds. “EPIC understands that some campground and roadside hazard tree removal is valid in order to travel safely in forested areas. However, as currently proposed the majority of this project is designed to capture the monetary value of these trees.”

The press release goes on to claim that leaving the trees can promote forest health, allowing damaged trees to slowly decompose into the soil, providing nutrients to plants and returning their carbon into the forest ecosystem.

But Mendocino National Forest representatives claimed during Thursday’s meeting that leaving damaged trees will increase fire risk, that more dead fuel on the ground means more danger, and that this is important to think about as climate change is predicted to increase the scope and severity of wildfires. This was one of the primary reasons they said it’s important to capitalize on fuels reduction.

Another important point made by Mendocino National Forest staff, foresters, and scientists was that the funds collected from the timber harvest plans could support restoration opportunities to remove small, non merchantable trees that pose a fire risk, improve animal habitat and create cleaner water systems, among other things.

Although the Plaskett-Keller project is the most time sensitive project that was discussed during the Thursday Zoom, as it is part of the first phase of the August Fire cleanup, the meeting covered parts of the forest fire remediation plan that will take place over years to come, including watershed restoration, studies about the success of salvage logging in reducing fire risk and fire severity, and more.

Additional information about the August Complex restoration is available on the Mendocino National Forest Website.