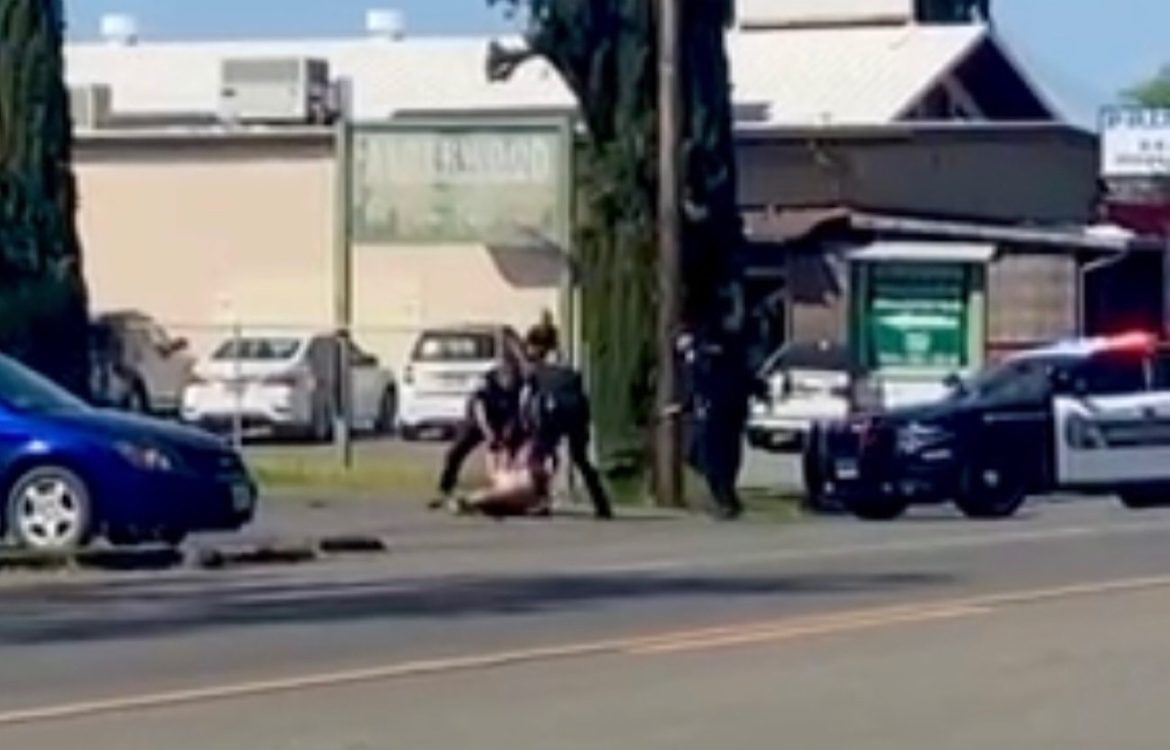 UPDATE 4/4/21 — Family members of Gerardo Magdaleno, 25 of Ukiah, have provided additional details about his medical condition. Magdaleno was released late afternoon on Friday, though his release was substantially delayed because jail authorities had to taken him back to the Ukiah Medical Center, presumably due to the injuries he suffered in his beating at the hands of the Ukiah Police Department. On Saturday he again was taken to the Ukiah Medical Center due to the fact that he was urinating blood. There doctors determined that his condition was severe enough to warrant a transfer and he was taken to Santa Rosa. According to family members his has damage to his kidneys, which is a major problem, due to the fact that he has been prescribed lithium in the past for his mental health problems.

His condition as of Easter Sunday is unclear.

Here is video of a small protest which occurred Sunday, against police brutality:

ORIGINAL
MENDOCINO Co., 4/3/21 — The Ukiah Police Department issued a statement in the police beating of Gerardo Magdaleno yesterday afternoon, in which they characterized the punches officers delivered as “numerous distraction strikes to the suspect’s head,” though the account does not mention the kicks. In the statement, the department does not say which officers were involved in the beating, nor does it say if there have been any disciplinary actions. They do note that, “As with any Use of Force instances, this incident will be evaluated and investigated per UPD Policy.” (Read the use of force policy, section 300 of the manual)

Since the beating occurred Thursday, the videos have circulated widely on social media, and the press, raising a public outcry with local politicians calling for investigation. A protest has been planned for noon on Saturday at Low Gap Rd. and Bush St., with a plan to march to the UPD station.

In addition, yet more video of the beating has come to light, with at least three distinct angles now available, thus showing the beating in its entirety. Based on these multiple videos it appears that UPD officers tased Magdaleno at least three times, including at least once while restrained by other officers. They also punched and kicked him numerous times, while on the ground.

In a brief interview, Ukiah Mayor Juan Orozco said, “I have no doubt that there needs to be accountability and there needs to be an investigation. The person [Magdaleno] didn’t have a weapon, and there’s no need to beat someone when the person is already under control. And in one  of the videos i saw they already had him on the ground — why’d they punch him on the ground?  We’re definitely going to look into that and there’s going to be consequences.”

“What we see in the video is disturbing, and we need to find out more about what happen, I just hesitate to say more than that, except that it’s disturbing…I think this needs to be investigated for sure, on the face of it we see a defenseless person who is mentally ill a defenseless person being beaten up, but I don’t know the story and I think to be fair we need an airing of it.”

Here is the new video, warning this video is graphic and contains nudity:

Yesterday Ukiah Police Officers responded to a service call for an individual exhibiting erratic behavior in a public setting. We are aware of videos circulating online showing a partial view of the incident and a graphic portrayal of force when the suspect failed to be subdued after a series of hands-off police techniques. Use of force incidents like this are rare and there is an investigation underway regarding the incident’s escalation and whether Ukiah Police principals and protocols were followed. We understand the serious nature of this incident and the questions that have arisen regarding use of force policies, and will keep the public informed on the outcome of this investigation.

What we know at this time is that UPD officers responded to a call for service by Mendocino County Sheriff’s Office (MCSO) on April 1, 2021 at approximately 2:54 PM, regarding a naked male, who was running along the roadway in the 1400 block of S. State Street.  It is common practice for UPD Officers to monitor radio traffic from MCSO, in the event that UPD Officers could assist. When these calls for service border UPD and MCSO’s jurisdictions, UPD Officers may be closer to the area of the call for service than an MCSO Deputy.

The UPD Officer responded to the area of 1450 S. State St., and observed a naked adult male, who was later identified as Gerardo Magdaleno, along the west edge of the roadway.  The Officer exited his vehicle and contacted Magdaleno.  Magdaleno failed to respond to simple verbal instructions, tensed and assumed an aggressive stance.   The Officer was concerned for the public’s safety, as there were numerous citizens, including children in the immediate area.  The Officer requested additional law enforcement respond to assist, as Magdaleno was not complying and appeared to be under the influence of a stimulant.

In the subsequent minutes, additional Officers arrived on site to help subdue the suspect. Magdaleno continued to display aggressive behavior, and the responding Officers moved through a series of escalating response actions to detain him while protecting his safety and the safety of nearby bystanders.

The Officers issued numerous verbal instructions to Magdaleno and he continued to ignore those instructions.  They then resorted to multiple taser deployments and multiple bursts of pepper spray. These hands-off measures were ineffective and Magdaleno continued to resist and repeatedly got back up to physically confront the Officers. Eventually Magdaleno was brought to the ground by several Officers but he continued to resist handcuffs and ignored verbal commands to stop resisting. The Officers then attempted to gain compliance by delivering numerous distraction strikes to the suspect’s head. This allowed the Officers a brief opportunity to place Magdaleno into handcuffs, and then the technique was ceased.

We understand the concern that is raised when physical strikes are used by Officers against a suspect. Ukiah PD officers are trained to evaluate risk and determine threats, pursue de-escalation techniques to avoid physical confrontation, deploy distance measures to secure suspect compliance, and then implement hands-on force if needed. We will be investigating this particular incident to evaluate what happened, whether the response techniques were deployed appropriately, and whether future incidents like this should be handled differently.

Based on Magdaleno’s continued physical resistance even after he was placed in handcuffs, his inability to follow verbal instructions, and the suspicion that he was experiencing a stimulant induced psychosis or excited delirium, Officers then placed Magdaleno into a WRAP.  This is a restraint device designed for the safety of the subject as well as Officers that keeps the subject’s legs straight (limiting their ability to kick or walk), while allowing the subject to be placed into a seated position.  This is an approved restraint device which allows Officers to keep the subject in a seated position, rather than lying on their stomach, which is not an optimal recovery position for a subject that is experiencing excited delirium.

Officers, Deputies and UVFA personnel began providing medical care for Magdaleno.  This included removal of Taser darts and decontamination for the OC spray that was administered to Magdaleno. Magdaleno was transported via ambulance to AHUV for a fuller medical evaluation prior to incarceration.  This is in alignment with UPD Policy, following a Taser application and use of physical force.

During the investigation, following the physical confrontation with Magdaleno, Officers located a pair of sweatpants that Magdaleno had been wearing just prior to the original call for service.  Inside the pant’s pocket a glass pipe, commonly used for smoking methamphetamine, was located, a violation of 11364 HS – Possession of drug paraphernalia.   Based on Magdaleno’s level of impairment from suspected methamphetamine use (intoxication), while in public and his apparent inability to care for himself, there was probable cause to believe he was in violation of 647(f) PC – Public intoxication.   Following his medical evaluation, Magdaleno was cleared for incarceration and booked at the MCSO Jail for the above-mentioned violations.  He is currently held at the MCSO Jail on $15,000.00 bail.

As with any Use of Force instances, this incident will be evaluated and investigated per UPD Policy.  This will include review of body worn and vehicle camera videos, which were both used throughout this incident.  The Use of Force Policy and all UPD Policies can be accessed and viewed via the UPD website.  UPD is aware that there are several videos of the incident, not captured by law enforcement, in circulation online.  It should be noted these videos may not have captured the incident in its entirety. We would encourage anyone wishing to provide video of the incident to contact LT. Phillips at 707-463-6254.

UPD would like to thank MCSO, CHP, UVFA and Med Star personnel for their assistance with this incident.  As a reminder, this incident remains under investigation and as further details may become available and released.  At the time of this press release, Magdaleno had not been processed at the MCSO Jail and the attached booking photo is from a prior incarceration.